Healthcare workers collect swab samples to test for Covid-19 at the Selcare Clinic in Shah Alam October 4, 2020. — Picture by Hari Anggara
Follow us on Instagram, subscribe to our Telegram channel and browser alerts for the latest news you need to know.
By JERRY CHOONG

KUALA LUMPUR, Oct 23 — Fatalities from Covid-19 hit a fresh high with 10 deaths today, according to the Health Ministry.

Its director-general Tan Sri Dr Noor Hisham Abdullah said this brings the total number of deaths in Malaysia to 214 cases, or 0.9 per cent of all total cases.

The previous daily high was seven deaths recorded in October 18 and March 29.

Most of the deaths were among senior citizens and the middle-aged, with the oldest a 77-year old man in Sabah. The youngest is a 33-year old man, also from Sabah.

Most of the victims have a history of medical ailments and illnesses. Seven of the deceased are Malaysians, while the remaining three are foreigners. Eight of the deaths occurred in Sabah, while one occurred in Kedah and Labuan, respectively.

“As of 12pm today, 710 Covid-19 positive cases have been detected, bringing the total number of cases reported in Malaysia to 24,514. Of this number, 8,416 are active infected cases, who have since been isolated and given treatment,” he said in a statement. 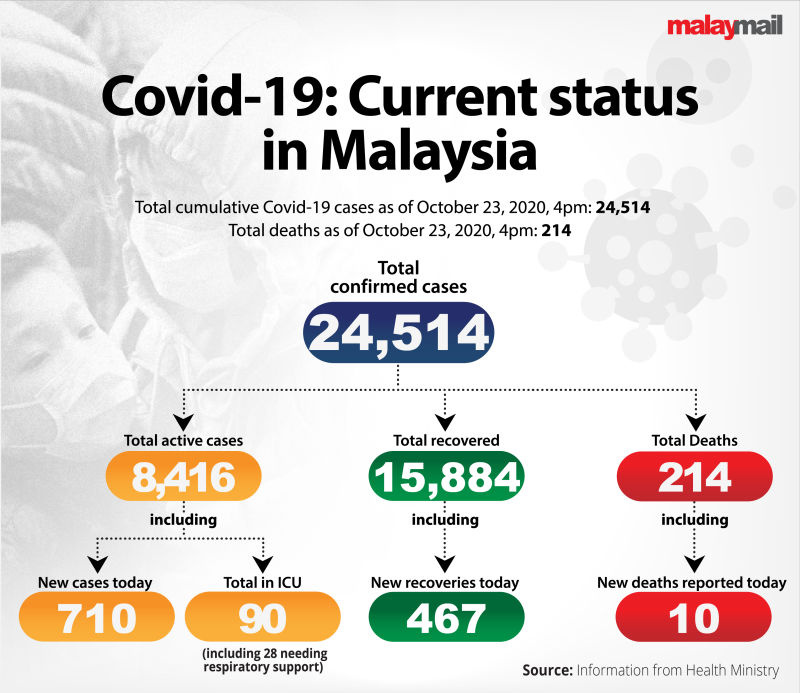 Sabah still has the highest number of infections, standing at 528 cases, or 74.4 per cent of the cases for today. Dr Noor Hisham said the mobilisation of healthcare personnel has aided in the screening process on the field and during medical treatment.

“In the states encompassing the Klang Valley, 73 cases or 10.3 per cent of all total cases today were detected. Of this number, 34 cases are from existing and new clusters.

One of the cases today involved an individual who recently travelled back from Sabah, bringing the total number of positive cases with a history of travel to and from the state since September 20 to 466 cases.

According to the ministry’s statistical breakdown, of Sabah’s 528 cases today 203 are from clusters, including the new Samudera cluster. 169 cases are from close-contact tracing with existing positive cases, while 156 were detected in other Covid-19 screenings.

“In Selangor, 62 cases were detected today, of which 29 come from clusters. 10 of the 29 cases are from the new Palma and Jaya clusters.

“18 were detected from close-contact tracing, one from an individual returning from a high-risk area in Sabah, and 14 from other Covid-19 screenings,” Dr Noor Hisham said.

“In the Labuan Federal Territories, 19 cases were detected, with 16 from existing clusters, one from close-contact tracing, and two in other Covid-19 screenings.

“For the KL Federal Territories, 10 cases were detected, five of which are from existing clusters and the new Palma cluster, two from close-contact tracing, and three from other Covid-19 screenings,” he said.

Meanwhile, 467 cases have since recovered from Covid-19, bringing the total number of recoveries to 15,884 or 64.8 per cent of the overall cases.

It is understood that Prime Minister Tan Sri Muhyiddin Yassin has sought an audience with the Yang di-Pertuan Agong to request that special emergency powers be granted to him in the face of the third wave of Covid-19 in the country.

Among them include the suspension of Parliament and elections, which provides for a layer of accountability from decision makers to elected representatives.