Health Director-General Tan Sri Dr Noor Hisham speaks during the Covid-19 press conference at the Ministry of Health October 1, 2020. — Picture by Miera Zulyana
Follow us on Instagram, subscribe to our Telegram channel and browser alerts for the latest news you need to know.
By ASHMAN ADAM

KUALA LUMPUR, Oct 16 — Five Malaysians and one foreign man died from Covid-19 today as Malaysia recorded 629 new coronavirus infections, with Sabah again having the most cases at 489.

This brings the total number of active cases to 6,323.

He added that out of the 627 locally transmitted cases, 579 involved Malaysians while the remaining 50 cases involved foreigners.

Out of Sabah’s 489 new cases, 260 were detected through close contact screenings while 71 were from already existing clusters and 158 others from Covid-19 screenings.

Selangor’s number of new cases dropped to 50 from yesterday's 150; half of the new cases were detected through close contact screenings.

The number of patients hospitalised in intensive care totalled 99, of which 31 were intubated.

Four of the five who died in Sabah were Malaysian men aged between 66 and 72 with pre-existing health conditions including high blood pressure.

The fifth was a 74-year-old Malaysian woman who had a history of high blood pressure, diabetes and kidney failure.

The sixth deceased was a 52-year-old man with a history of diabetes, lung disease, psoriasis and spinal disease who died at the Universiti Malaya Medical Centre in KL. 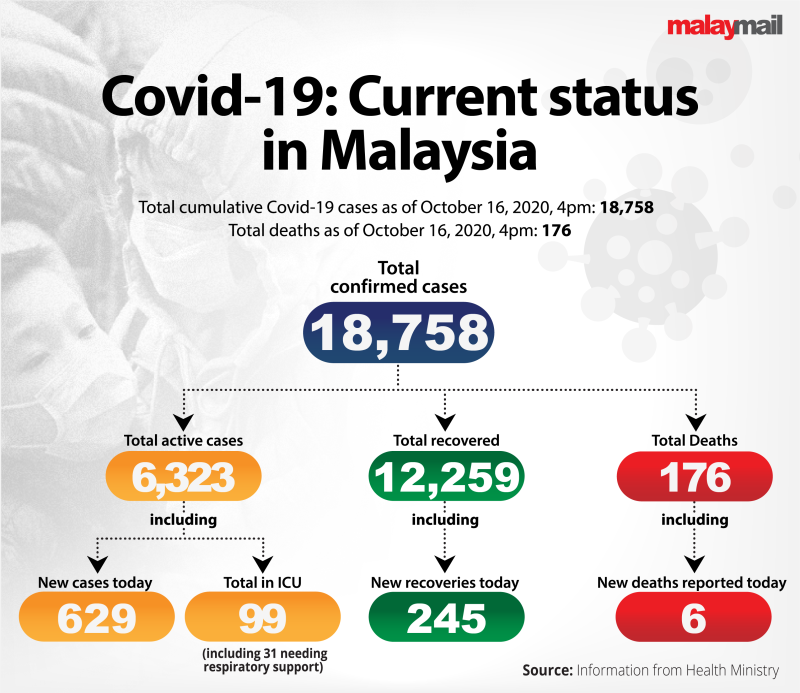