Dr Noor Hisham also discouraged Malaysians from gathering in large groups during the long weekend, with Merdeka falling on Monday. — Picture by Choo Choy May
Follow us on Instagram, subscribe to our Telegram channel and browser alerts for the latest news you need to know.
By AZRIL ANNUAR

In his daily Covid-19 press statement, its director-general Tan Sri Dr Noor Hisham Abdullah said that there are a total of 9,306 cases currently, with 151 active cases that are being treated.

He also reported 36 recoveries, leading to a total of 9,030 recoveries or 97 per cent of all cases.

“On the eight imported cases, it involves one Malaysian and seven non-Malaysians. They came from India (five cases in Kuala Lumpur and two in Selangor) and one from the Philippines (one case in Sarawak).

“Out of the two locally transmitted cases, one is a Malaysian and the other is a non-Malaysian. The Malaysian was detected in Kedah from a screening.

“The non-Malaysian was detected in Selangor and is an illegal migrant being detained at the Immigration Detention Depot in Bukit Jalil,” said Dr Noor Hisham.

Currently, eight patients are being treated in the intensive care unit with six requiring breathing assistance.

No new deaths have been recorded, with the death toll remaining at 125 or 1.34 per cent of total cases.

The statement also reported that up until August 27, the ministry has found 904 cases from 106,793 travellers who have arrived in Malaysia, which is a positivity rate of 0.85 per cent.

Dr Noor Hisham also discouraged Malaysians from gathering in large groups during the long weekend, with Merdeka falling on Monday. 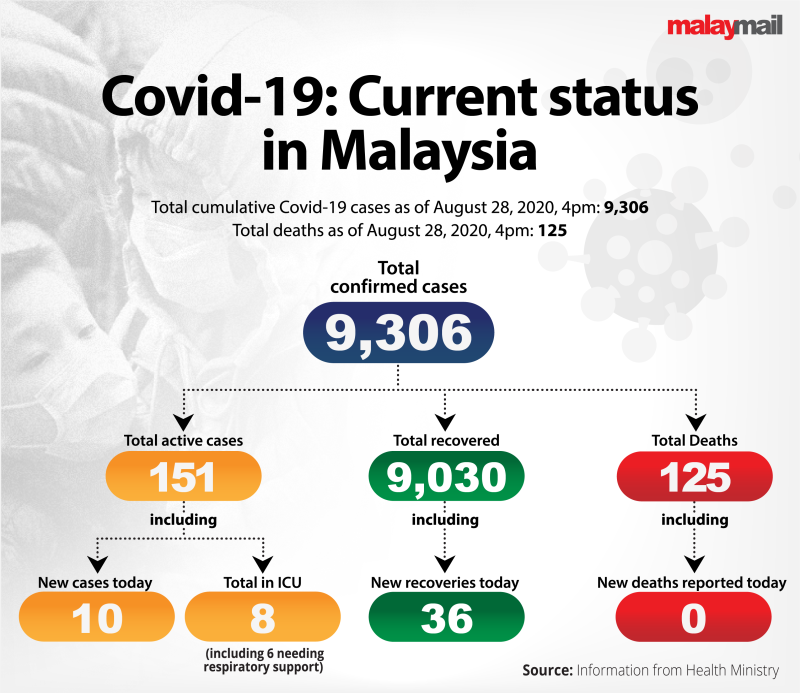