KUALA LUMPUR, June 10 — Malaysia will be starting its recovery movement control order (RMCO) today, which is a new phase that offers more relaxed rules for Malaysians in line with the improving Covid-19 situation in the country.

Malaysia made a great start into the RMCO, as the country yesterday recorded its highest-ever daily number of recovered Covid-19 patients during the MCO period at 281, while the daily number of new Covid-19 cases recorded yesterday was at seven — matching the previous day’s record low.

1. What is the title of the new regulations?

Prevention and Control of Infectious Diseases (Measures within Infected Local Areas) (No. 7) Regulations 2020.

(The number seven in this new set of regulations shows that it is the seventh such regulation created this year, with the government via the health minister previously introducing such regulations every time it started a new MCO from phase one to phase four, and when it implemented CMCO or the fifth and six round of the MCO but with more relaxed rules).

2. When do the new regulations take effect?

The new set of regulations for RMCO has a gazetted date of June 9 (yesterday) and takes effect from today (June 10) until August 31.

The list of prohibited activities under RMCO (11 categories) is much shorter than the CMCO list (15 categories), as the government has allowed more activities and more sectors to reopen and resume. This is perhaps a mark of hard-earned additional freedom gained by a combination of strict government enforcement of Covid-19 precautions, the health authorities' active Covid-19 screenings, and Malaysians' compliance with rules and precautions, but the Health Ministry is still reminding Malaysians daily to continue to comply with standard operating procedures and to practise social distancing.

New additions to the list of prohibited activities under the RMCO are:

But the rules also state that swimming pool activities for the training of national athletes participating in the Tokyo Olympic Games 2020 will be allowed.

- Tours overseas by Malaysians and tour activities in Malaysia by foreigners entering Malaysia. (This matches the current situation where international borders are still controlled under RMCO, with Malaysians not allowed to fly out and foreigners not allowed to enter the country as part of anti-Covid-19 measures.)

- Reflexology and massage activities in a health and beauty establishment.

- A new catch-all category: Any activity with many people in attendance at a place making it difficult to carry out social distancing and to comply with the directions of the health director-general.

4. Activities that are still prohibited under the RMCO regulations

When compared to the CMCO regulations, activities that are no longer specifically listed as prohibited activities under the RMCO rules include lottery, casino activities; barber shop and hair salon services; and filming of movies, dramas, documentaries and advertisements.

Under the CMCO, the rules initially state that a private vehicle can carry a maximum of four persons — driver and three passengers — if they are all staying in the same house. During the CMCO period from May 27, this rule was relaxed by no longer specifying the maximum number of passengers allowed in private vehicles, as long as the numbers are within legal limits and as long as they stay in the same house.

The RMCO rules no longer carry any provision for rules on passengers in private vehicles.

While any citizen, permanent resident, expatriate, diplomatic corps or any other foreigner permitted by the Immigration director-general to enter Malaysia still have to undergo health checks upon arrival in Malaysia, a new RMCO rule is the requirement to wear a wristband if any of these individuals are told to undergo self-quarantine at home. (Previously, it was mandatory for all who had arrived in the country to undergo quarantine at government-appointed quarantine centres.)

While processions are still banned under the new RMCO rules, there are no longer specific provisions under the RMCO rules on the maximum number of persons allowed at funeral gatherings (maximum 20 persons at funerals during CMCO).

And while the CMCO rules previously prohibited all gatherings whether for economic, religious, educational and learning, sports, recreational, social or cultural purposes before a May 22 amendment allowed gatherings at places of worship based on the health director-general's directions, the RMCO rules only state that a person may gather at any place of worship of his religion — including to congregate to perform prayers — but subject to the directions of the health director-general.

But the catch-all category of prohibited activities as mentioned above still applies: Any activity with many people in attendance at a place making it difficult to carry out social distancing and to comply with the directions of the health director-general.

Breaching any of the regulations under the RMCO is still punishable by a maximum fine of RM1,000, maximum jail term of six months, or both.

*A previous version of this story contained an error which has since been corrected. 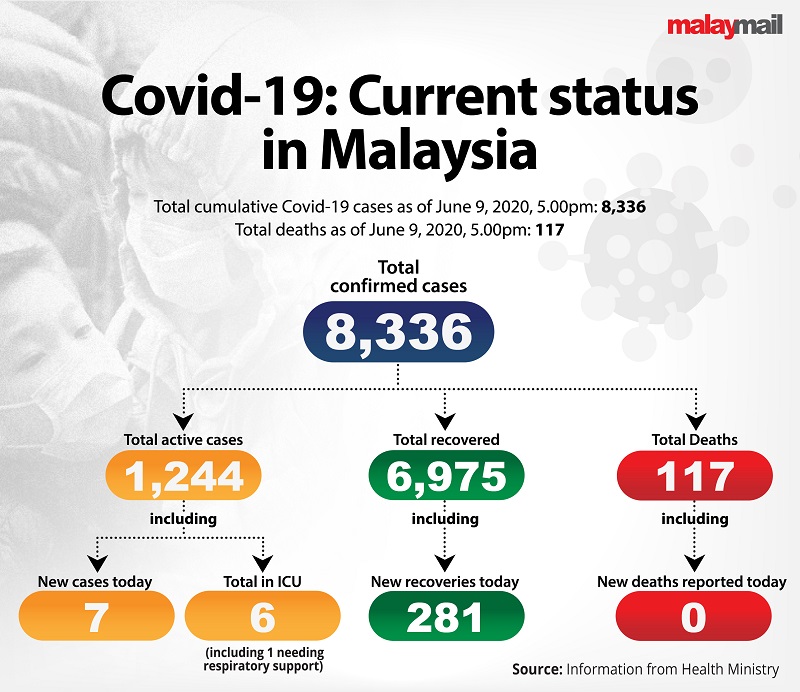