KUALA LUMPUR, April 18 — Most of the Indian Muslim community who live in the city centre will know the Allapitchy Store, or ottu kadai (small sundry shop in Tamil) on Jalan Dang Wangi, said Abdullah Hakim.

However, Hakim, a friend of the family who owns the shop, said it is not doing so well now.

More so after the enhanced movement control order (EMCO) was enforced in the areas surrounding Masjid India, which includes Jalan Dang Wangi.

“This sundry shop is special because the family has managed to always keep its price slightly lower than most sundry shops.

“But things don't look so good for them with customers already dwindling before the EMCO was enforced.

“Now, they only get two to three customers popping in for small items like mineral water or bread,” said Hakim who spoke to Malay Mail on behalf of shopkeeper, Mohammad Rafik, son of founder J. Allapitchy.

The Allapitchy Store started serving the Indian Muslim community in the 70s. With no other buildings in the vicinity, they were the only ones here at the time, Hakim said.

“Even the ceiling fan inside the shop is an antique that came from the British era, and it still works,” said Hakim.

But back then, Hakim said they did not have to pay rent for their portion of the shoplot.

“They had a special arrangement until the shoplot was sold to another owner; only then did they start charging rent.

“Now the family has to pay about RM5,000 a month. For a while, they can still sustain, but they are not sure how things will turn out by April 28.

“Frankly, we don't think everything will die down by the 28th. Even if they lift the EMCO, people will not be moving around as freely as they used to, and that will affect the shop's traffic,” said Hakim.

Several generations of the family have spent a lot of time together at the shop. The business means a lot to Allapitchy who is 90 today.

“Those who live in this area will remember Allapitchy always reading the papers, while he watched the shop. Even when he isn't well, the moment he sits here, he will somehow feel better.

“He is not as fit now, but he insists on visiting the shop. He recently returned to India, but he was actually planning to come back around this time.

“Whenever he is here, he insists on staying at the shop. That's how attached he is to it,” said Hakim.

The sundry shop's business is not the only one that is struggling to survive due to the EMCO, Hakim said.

Hakim, who works for Syed Bistro on Jalan Dang Wangi, said even the eatery's business has deteriorated since the MCO was enforced.

“Now it is worse. With deteriorating business, I'm really worried about how we are going to support all our workers.

“I don't know if we can pull through if the lockdown continues beyond April 28,” he said.

No job, no money, no food

Hakim added that many foreign workers who are currently stuck in the residential buildings (Selangor Mansion, Malayan Mansion and Menara City One) are jobless.

“Before the MCO, many of them were in the midst of looking for jobs, and many are also daily wage earners.

“Now, those who can't work have no money to buy food and those who were looking for jobs are stuck,” he said.

Since the EMCO started in Menara City One, Hakim has been delivering food and groceries to those who do not have any money.

“For those who don't have money, I told them they can pay me when they find a job after the EMCO is lifted.

“I understand how hard it is to earn a living here as a foreign worker. I've been through all that, so I am helping in my own way,” he said.

As for Brabu, a car jockey who works at a five-star hotel in the area, he is currently living on his previous month's salary, spending as little as possible.

“The management has yet to inform us as to whether they can pay us a full month's salary for April and what's the plan should the MCO be extended,” the Indian national told Malay Mail after buying some bread from the sundry shop.

Meanwhile, on Jalan Tuanku Abdul Rahman, popular eatery Capital Cafe has been “forced” to close since March 18, said one of its owners, Lin Kee Hua.

“We had no choice because no one comes to this street since the textile businesses are not allowed to open,” he told Malay Mail, speaking from a window on the first floor of the shoplot.

Lin's brother, who did not reveal his name, said he could not understand why the authorities decided to shut Jalan Tuanku Abdul Rahman when no Covid-19 positive cases have been reported along the road.

“There are no positive cases here! No one has sent food to us. It is ridiculous.

“And now we can't even leave the shop to buy a loaf of bread,” he said.

When asked how they were coping with the enforced order, Lin said, thankfully, they have fresh produce stocked for their daily eatery operation.

“I think they forgot about us since our neighbours are all non-eatery businesses.

“I suppose we can call the government if we run out of food. But I do hope that this will not drag on any further than April 28,” said Lin.

The Capital Cafe, which was founded in 1956, is a landmark on Jalan Tuanku Abdul Rahman, that is also famous for its textile shops.

As of April 15, the areas in the environs of Masjid India and Jalan Munshi Abdullah joined the list of EMCO-enforced zones.

During the EMCO period, no visitors are allowed into residential areas and all non-essential business activities must close. 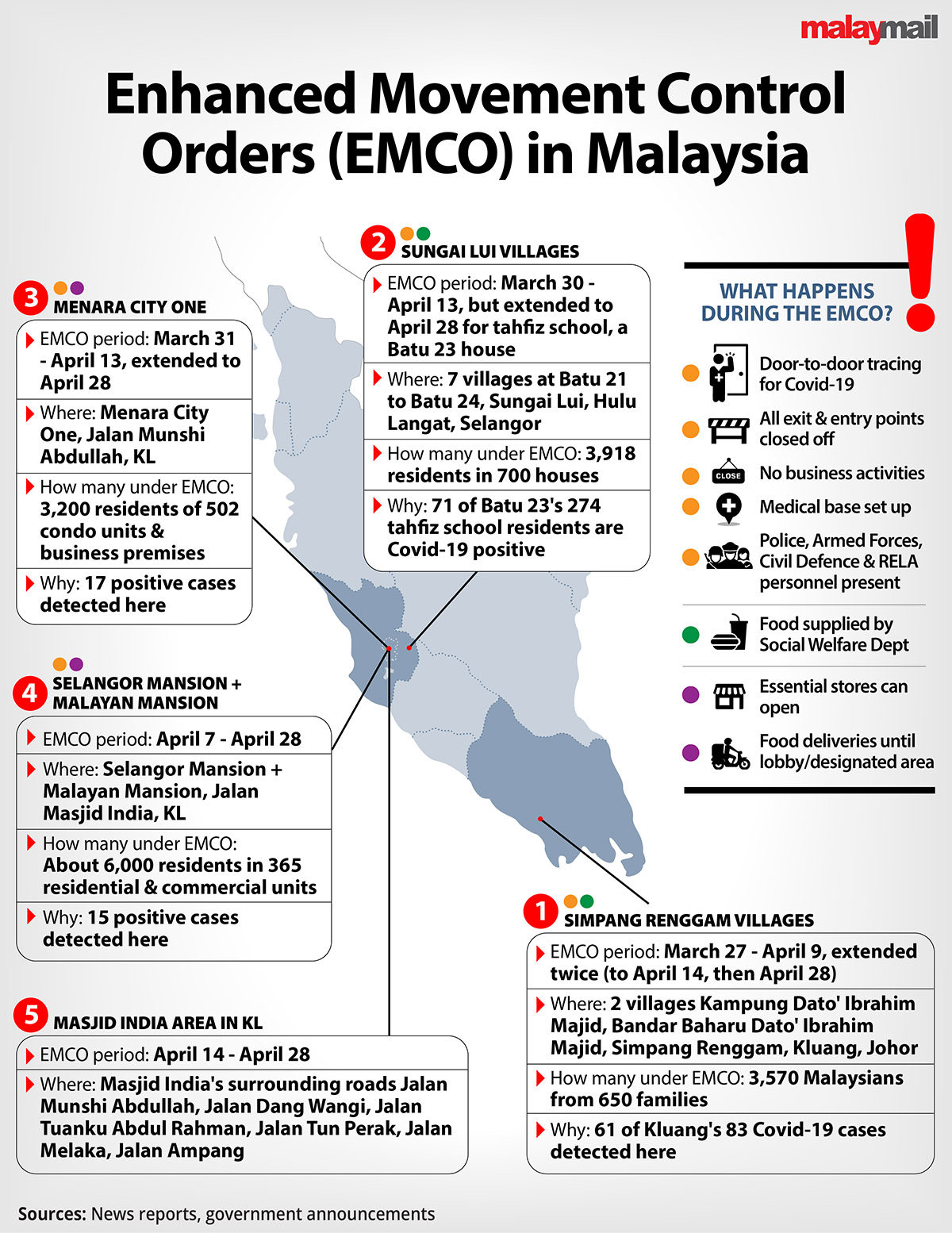