Police and RELA personnel man a roadblock in Sungai Lui, Hulu Langat on April 1, 2020. — Picture by Hari Anggara
Follow us on Instagram, subscribe to our Telegram channel and browser alerts for the latest news you need to know.
By IDA LIM

KUALA LUMPUR, April 2 — The Batu Pahat district in Johor is now the country's latest Covid-19 red zone or hotspot, which is the most severe category, the latest data released by the Health Ministry today showed.

With the addition of Batu Pahat, this means there are now 16 red zones or Covid-19 hotspots with at least 41 cases, based on the latest available data as of April 1 noon.

Batu Pahat became a red zone after its total tally of Covid-19 cases increased from 39 cases on March 31 to 44 cases on April 1.

The Hulu Langat district in Selangor had emerged on March 30 as the nation's top red zone — for the first time since the Health Ministry started releasing data on the distribution of Covid-19 cases from March 21.

On March 30, Hulu Langat became the top red zone nationwide when it registered a total tally of 258 Covid-19 cases, as compared to the districts of Lembah Pantai in Kuala Lumpur (226) and Petaling in Selangor (224).

Hulu Langat has continued to be the red zone with the highest number of Covid-19 cases recorded on March 31 with a total tally of 265 and on April 1 where the total tally increased to 273.

In other words, it is the third consecutive day that Hulu Langat is the top Covid-19 red zone. 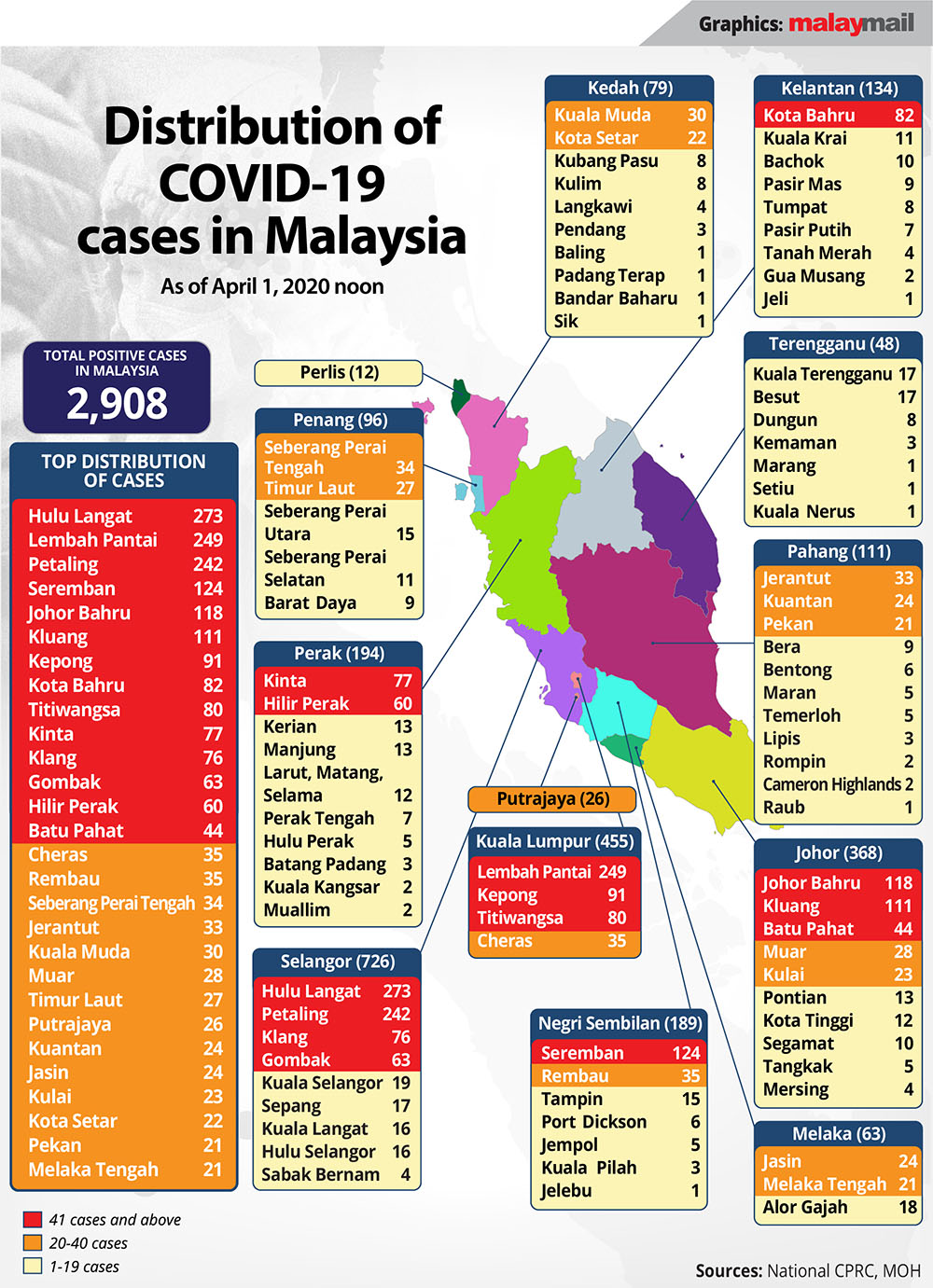 Selangor continues to have the highest number of red zones at four, while the addition of Batu Pahat as a red zone means Johor has now joined Kuala Lumpur as having three red zones each, while Perak has two red zones, with the rest having only one red zone each: Negri Sembilan, Kelantan, Sarawak and Sabah.

In other words, almost 65 per cent of the 2,908 Covid-19 cases detected in Malaysia as of April 1 have been recorded in just these 16 red zones. 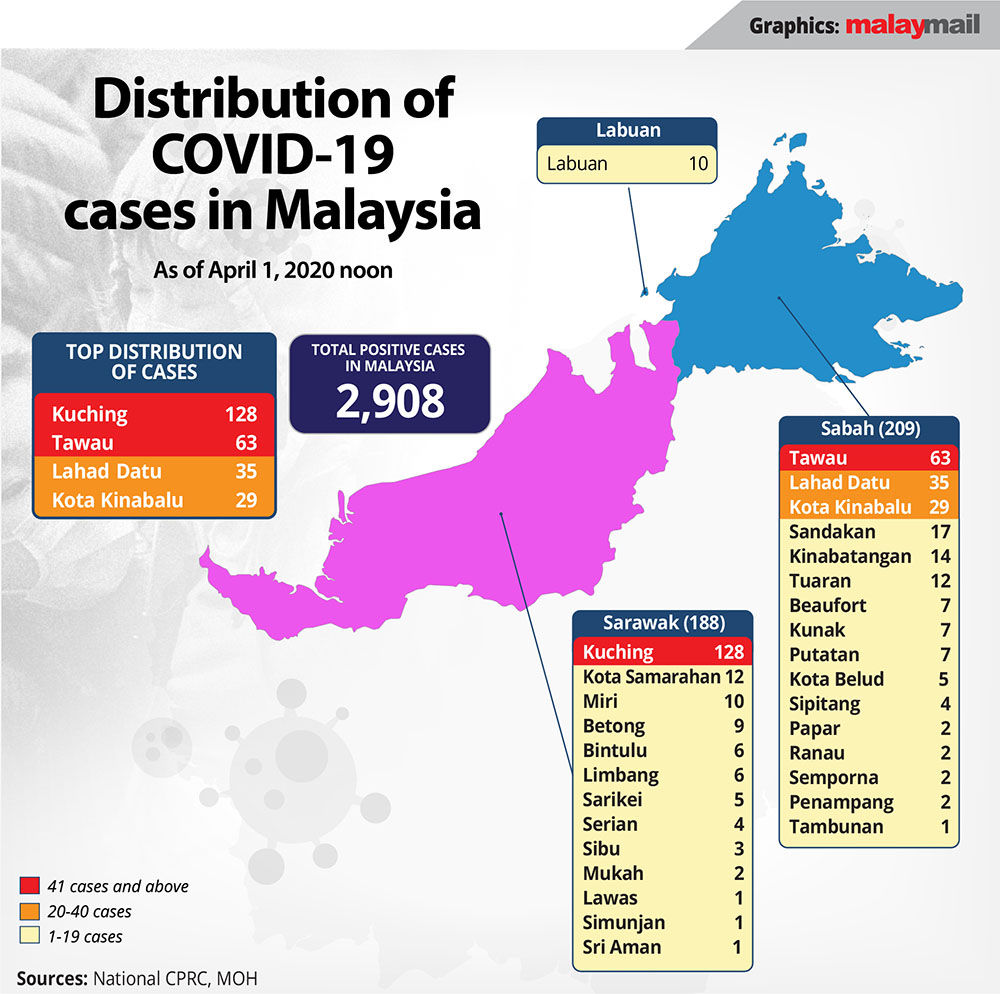 Why is the orange zone, red zone status significant?

In the latest data as of April 1, there are now 16 Covid-19 orange zones in the country, as Batu Pahat was upgraded to red zone status while Jasin and Melaka Tengah became orange zones when their tallies increased to 24 and 21 respectively on this day.

An orange zone is a district or Covid-19 hotspot where there are 20 to 40 cases.

The significance of being an orange zone is that it sometimes only takes several cases for a district or area to tip over and be recategorised as a red zone, with red zones being districts that have 41 cases and above.

Although being designated as a red zone does not necessarily mean more restrictions of movement by the government to curb the spread of Covid-19, villages or even buildings — with a very high concentration of Covid-19 cases — in red zones can be put under tighter control to enable the government to carry out door-to-door Covid-19 detection activities. 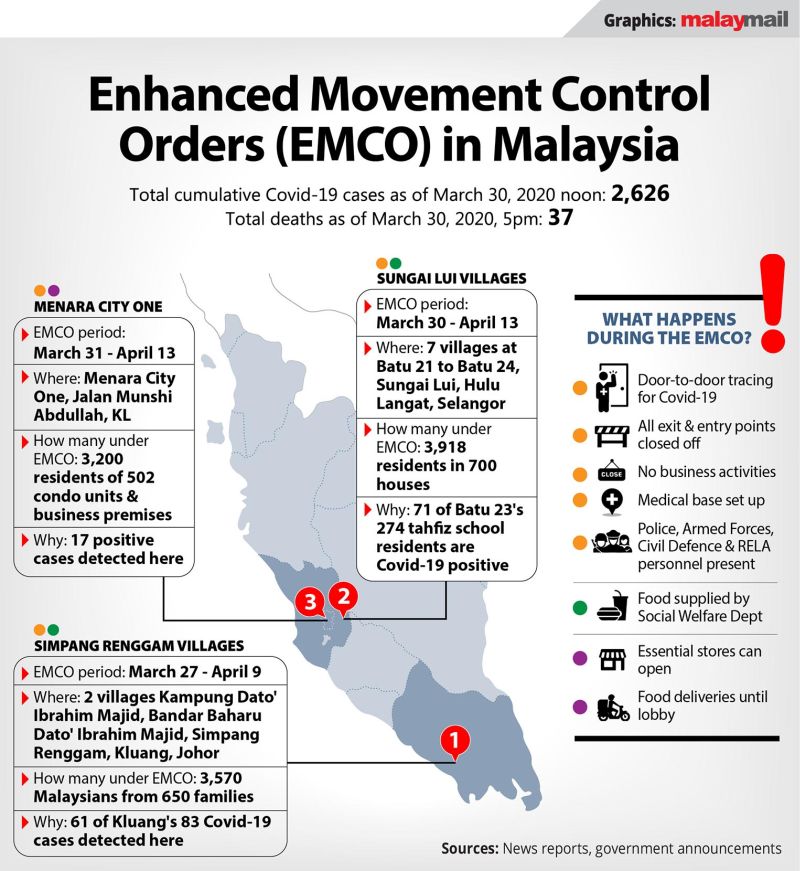 In the whole of Malaysia now, there are only 31 districts in six states that are free of Covid-19 cases as of April 1, down from 33 districts on March 30 and from the initial 39 districts in seven states on March 25.

This means there are now only four districts in peninsula Malaysia that have yet to record any Covid-19 cases, while the bulk of districts with no reported Covid-19 cases yet are mostly in Sabah (nine districts) and Sarawak (18 districts).

Districts with zero Covid-19 cases are categorised as green zones by the Health Ministry, which has urged residents there to take precautionary measures to ensure their district remains a green zone.

In a poster yesterday by the Health Ministry's MyHealth portal, communities in green zones were encouraged to do the following to protect their community and maintain their green zone status: spread awareness to comply with the government's movement control order, practise social distancing by staying one metre apart from each other and maintaining the cleanliness of hands, besides spreading awareness on Covid-19 prevention tips.

These communities were also encouraged to limit and record the entry and exit of visitors and local residents, to report to the community leader or police when group activities are detected, to mobilise the existing residents' committee as a coordinator for Covid-19 prevention activities in the community, and to report any suspected Covid-19 cases to authorities. 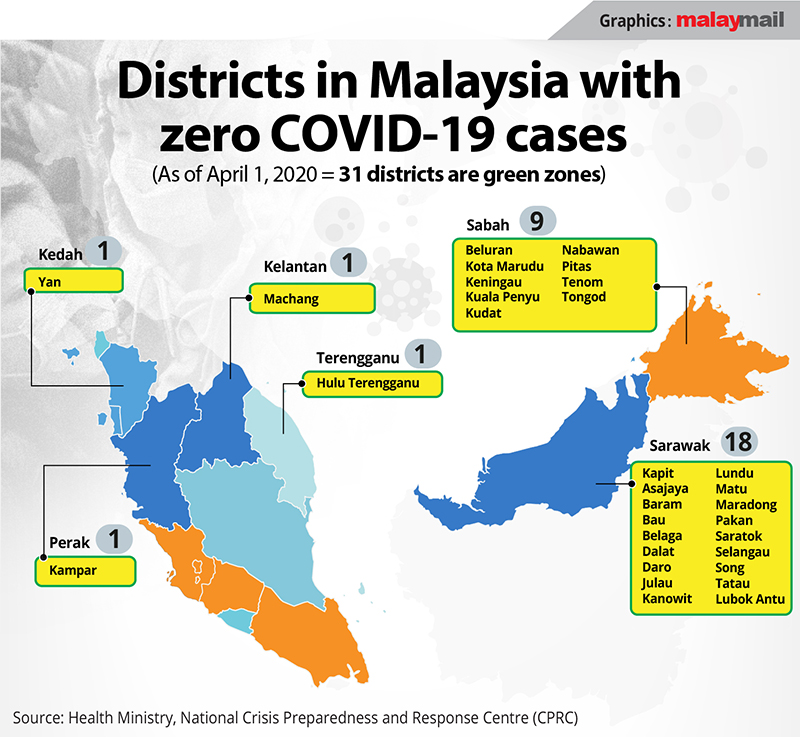 Yesterday, the Health Ministry reportedly launched a new programme to empower the community to help in the shared responsibility of making districts in Malaysia free of Covid-19 cases.

Under this programme, Deputy Health Minister I Datuk Dr Noor Azmi Ghazali reportedly said districts with zero Covid-19 cases in 14 days are green zones, while those with one to 20 cases are yellow zones, and those with 21 to 40 cases are orange zones, while red zones have more than 41 cases.

“The objective of the programme is to ensure that districts classified as Green zones maintain their status and to turn the Yellow districts to Green districts in 14 days,” he was quoted as saying yesterday by national news agency Bernama.

Malaysia yesterday charted its highest number of Covid-19 recoveries in a day with 108 discharged. The current death toll stands at 45. 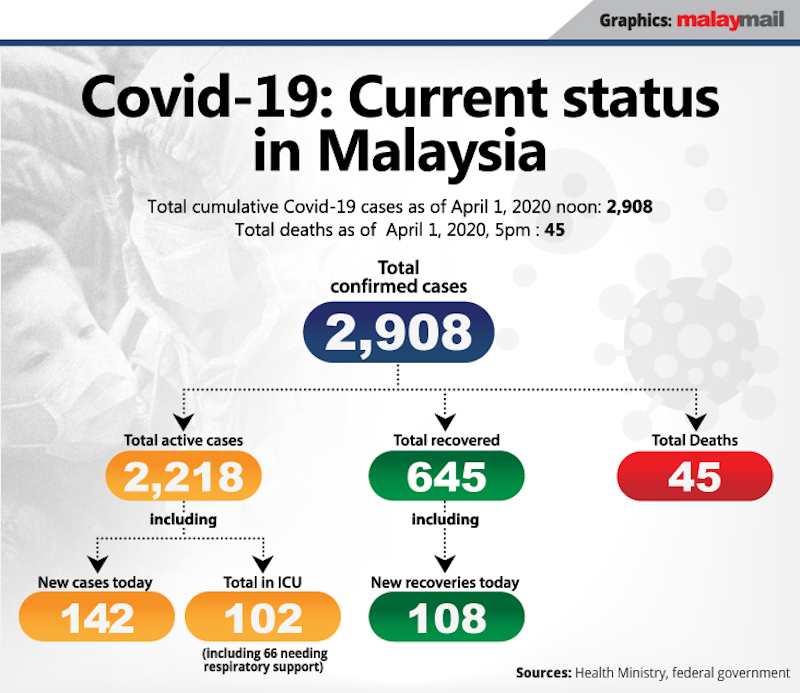