Protesters gather at Dataran Merdeka during a protest against Bersatu president Tan Sri Muhyiddin Yassin on February 29, 2020. — Picture by Hari Anggara
Follow us on Instagram, subscribe to our Telegram channel and browser alerts for the latest news you need to know.
By SOO WERN JUN

KUALA LUMPUR, Feb 29 — Prominent lawyer Datuk Ambiga Sreenevasan has called for democracy to be restored to voters by letting the Dewan Rakyat decide on the country's political turmoil.

Ambiga, who came from a wedding function to join a crowd of 200 protesters at Dataran Merdeka here, said she has not given up on the country’s democracy.

“Look at how many people have come out today when a situation as such had taken place.

“I’m here because I believe democracy is still alive and it is we people who have to keep it alive. It’s up to us,” she said when met by reporters.

The former Bersih 2.0 chairman said this also referred to the general election belonging to the voters, and therefore must show a response to the political situation of the country.

“It’s our election, our democracy, our Parliament and we have to show our reaction to what has taken place.

“I believe at the end of the day, all the MPs have to answer to us.

“So I want to know from each and every member of Parliament, who did they support. They need to disclose to us because we are the people, we deserve to know,” she said referring to both political divide — Pakatan Harapan (PH) who reportedly threw their support for Tun Dr Mahathir Mohamad to be the next prime minister while Tan Sri Muhyiddin Yassin who has Bersatu and Muafakat Nasional’s (Umno, MCA, MIC and PAS) backing him to be prime minister. 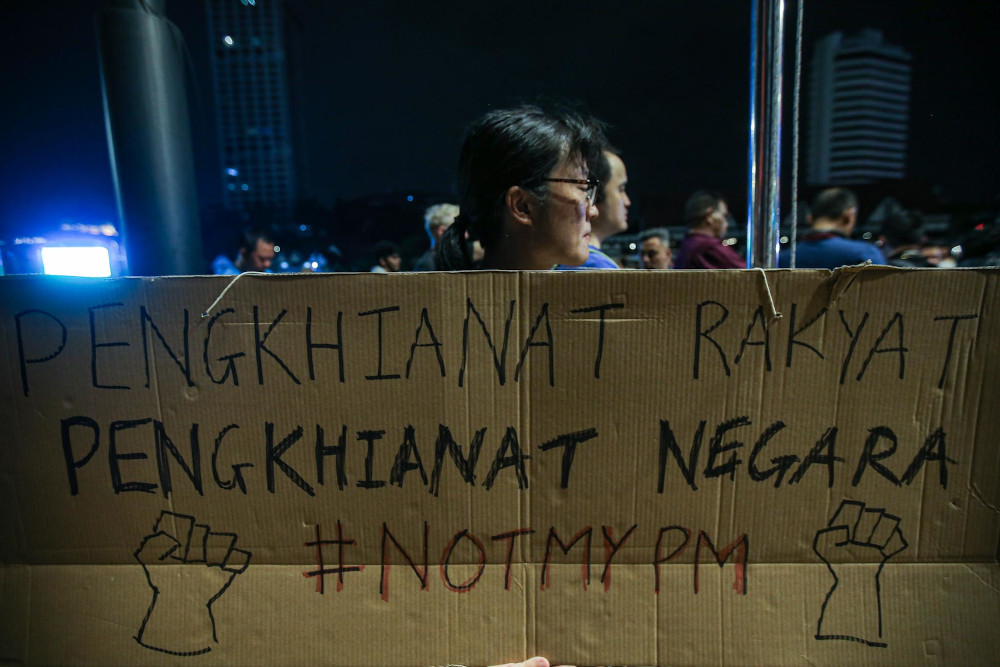 Ambiga also urged all Malaysians to not give up and to not lose heart.

“As I said, don’t give up hope, don’t lose heart. I think justice will always eventually prevail,” she added.

Earlier in the evening, the Istana Negara announced for Muhyiddin to be sworn in as prime minister tomorrow morning at 10.30am.

In the Istana Negara statement — regarding Muhyiddin’s swearing-in ceremony — it said that this was after it received today nomination lists of candidates for the prime minister post from independent MPs as well as the leaders of political parties that had MPs in the Dewan Rakyat, adding that the Yang di-Pertuan Agong was of the view that Muhyiddin had the majority support following the representations received.

When asked about a motion of no-confidence called by Malaysians, Ambiga said that it was the right way to achieve a democratic solution to the current political instability.

“A motion of confidence is a right. At the end of the day this has to be tested in Parliament. That is a correct thing [to do] and anybody can put forward a motion of no-confidence and then only the numbers will come out, and let the MPs openly declare their support.

“That is the safest way forward. Whatever happens it should go back to Parliament. There should be an urgent sitting of Parliament because that is where it will be transparent.

“No-confidence motion should be discussed, debated and then put to a vote. Ultimately, that’s where it should end up, that’s the democratic way,” she said.

She added that Malaysia has a Parliament that works, and all these should be brought back there.

The crowd who gathered today at Dataran Merdeka, too, had called for a motion of no-confidence, deeming the decision to choose Muhyiddin as prime minister undemocratic.

Commenting on the possibility of electoral watchdog Bersih 2.0 who may organise a protest, Ambiga said she will support Bersih should it decide to do so.

“I’m back [to support the voice of the people],” she said.