KUALA LUMPUR, Feb 3 — Datin Seri Rosmah Mansor was absent from the court here on the scheduled first day of her first trial involving an alleged bribes-for-contract scandal, which was to be held on the same day as her husband and former prime minister Datuk Seri Najib Razak's ongoing corruption trial.

Rosmah, who will be turning 69 this year, did not show up as expected today for her trial that was scheduled to start at 2pm.

Rosmah's lawyers produced a medical certificate to explain her absence, saying that the sick leave was for until February 8.

Lead prosecutor Datuk Seri Gopal Sri Ram had however objected to the medical certificate being used to justify her absence in courtroom, arguing that he too was suffering from some of the medical conditions that Rosmah was said to have.

“We regard this as a last-minute attempt to avoid attending court,” Sri Ram said.

“She also complained of dizziness when lying down in a wrong position. I suffer from that.

“She was known to have cervical spondylosis and osteoarthritis of the knees for the past few years. I have both of those things,” he said while standing up in court, adding that the prosecution does not accept the medical report which also listed other conditions such as her suffering of chronic adrenal insufficiency for the past five years.

Sri Ram said this matter should have been brought to the prosecution’s attention earlier, and that Rosmah should have been examined early last week if she was really unwell and suggested that this was an “act of bad faith”.

"The only problem I think is that she suffers from overdose of publicity and wealth," he quipped, even suggesting that a warrant of arrest be issued to secure Rosmah's attendance in court.

Rosmah’s lead defence lawyer Datuk Jagjit Singh said he was only informed of the medical situation last night by his client.

He then responded to Sri Ram’s comment on giving early notice, saying: “Nobody likes to fall sick, nobody can give notice ‘I’ll fall sick next week’.”

He also said Sri Ram’s suggestion to revoke bail and detain Rosmah behind bars to ensure her court attendance was “extreme”.

He pointed out that Rosmah’s medical conditions are “ongoing” and “flares up from time to time”.

High Court judge Mohamed Zaini Mazlan sympathised with Rosmah’s condition but insisted that the trial resume on Wednesday, adding that she could come to court in a wheelchair if necessary.

The judge said he was “very willing to allow adjournments as and when she feels necessary to take a break”.

When met outside the courtroom, Jagjit told reporters that spondylosis was just one of the many medical conditions Rosmah is suffering from.

When asked if she would be present in court on Wednesday, Jagjit crossed his fingers.

“Depends on her condition. Courts said she has to be here, but what happens to her, I really can’t answer,” he said.

Datuk Akberdin Abdul Kader, another lawyer representing Rosmah, was asked when his client visited the doctor.

“It’s a medical issue, so we can’t discuss much,” he replied.

This is not the first time Rosmah had called in sick for court proceedings, as she had also done so previously during a case mention on April 5, 2019 and also during court proceedings in May 2019.

Najib was already present in the Kuala Lumpur court complex earlier this morning to resume his testimony in his own defence in the case involving RM42 million of former 1Malaysia Development Berhad (1MDB) unit SRC International Sdn Bhd's funds.

In her trial today that was scheduled to start at 2pm, Rosmah would be facing three charges for both soliciting and accepting millions of ringgit in bribes in exchange for helping a company to secure a contract worth RM1.25 billion from the Education Ministry through direct negotiations.

The contract was for an integrated project for solar photovoltaic hybrid system and for the operation and maintenance of generators for 369 rural schools in Sarawak.

Rosmah was charged on November 15, 2018 with having asked for an RM187.5 million bribe or 15 per cent of the contract's value from the company Jepak Holdings Sdn Bhd's managing director Saidi Abang Samsudin, and receiving an RM1.5 million bribe from Saidi.

She was charged on April 10, 2019 with receiving a RM5 million bribe in cash from Saidi via her former aide Datuk Rizal Mansor.

This is not the only case that Rosmah has, as she is also facing 17 counts of money-laundering charges in a separate case.

That case is scheduled to go on trial in May this year. 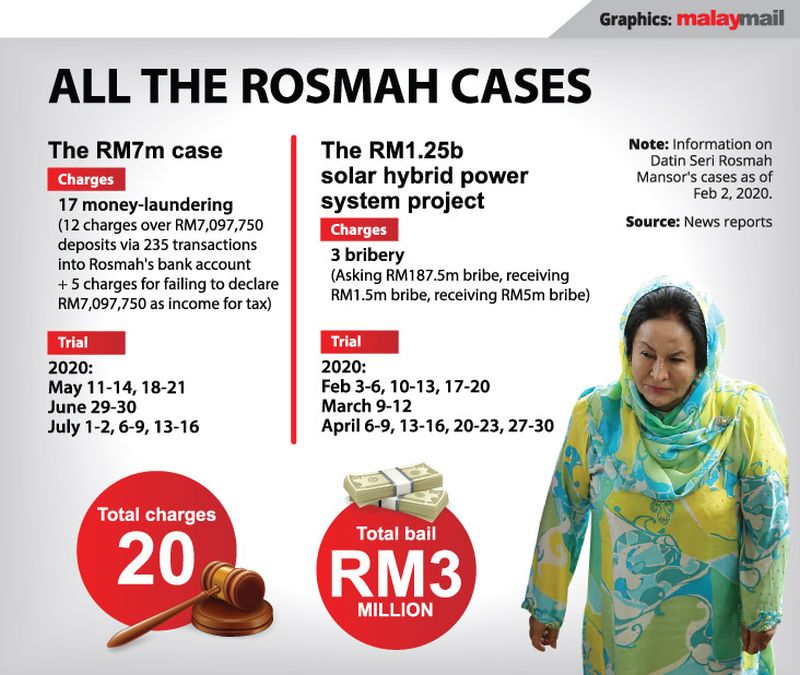