A woman buys ingredients for ketupat and rendang in Kuala Lumpur ahead of Hari Raya Aidilfitri celebrations. — Picture by Mukhriz Hazim.
Follow us on Instagram, subscribe to our Telegram channel and browser alerts for the latest news you need to know.
By JERRY CHOONG

A recent study has revealed that traditional Malay foods are being served less and less during the Aidilfitri, as changing eating habits during the festive season indicate increased potential health risks in the immediate future.

Universiti Kebangsaan Malaysia’s Institute of the Malay World and Civilisation (Atma) fellow researcher and linguistic specialist Junaini Kasdan and her team recently conducted a study on dietary patterns and health risks based on Twitter users’ choice of words, which took place during this year’s Aidilfitri in June.

“We focused specifically on food consumption during Raya by singling out non-food related Raya discussion topics, eventually collecting the information from over 100 users who frequently tweeted about what they ate and how many open houses they went to,” she said in her presentation at Atma’s National Malay Gastronomy Seminar recently.

Junaini said the data was then compiled into a corpus-assisted discourse studies database, and analysed several times.

Although certain traditional foods including ketupat and rendang are still considered core festive foods, she said this was changing in the primary, side, and dessert foods categories.

“From what we gleaned, foods or dishes from other Western and Asian cultures have become more prominent. In particular, traditional desserts such as agar-agar merah and basil water (air selasih) were no longer consumed as they have been replaced by foods such as fruit punch and cream puffs.

In the case of teenagers and younger, many often prefer modern fare over traditional ones.

“If given a choice between kuih lapis and tart, most of them would choose tart. Hence our concern that Malay cultural identity when it comes to food is steadily eroding.

“We also discovered that traditional Malay dishes once considered unique to a region can now be found everywhere else, such as Negri Sembilan’s lemang, ketupat palas from the Peninsula’s North and East Coast, or nasi himpit from Johor and Selangor,” Junaini said. 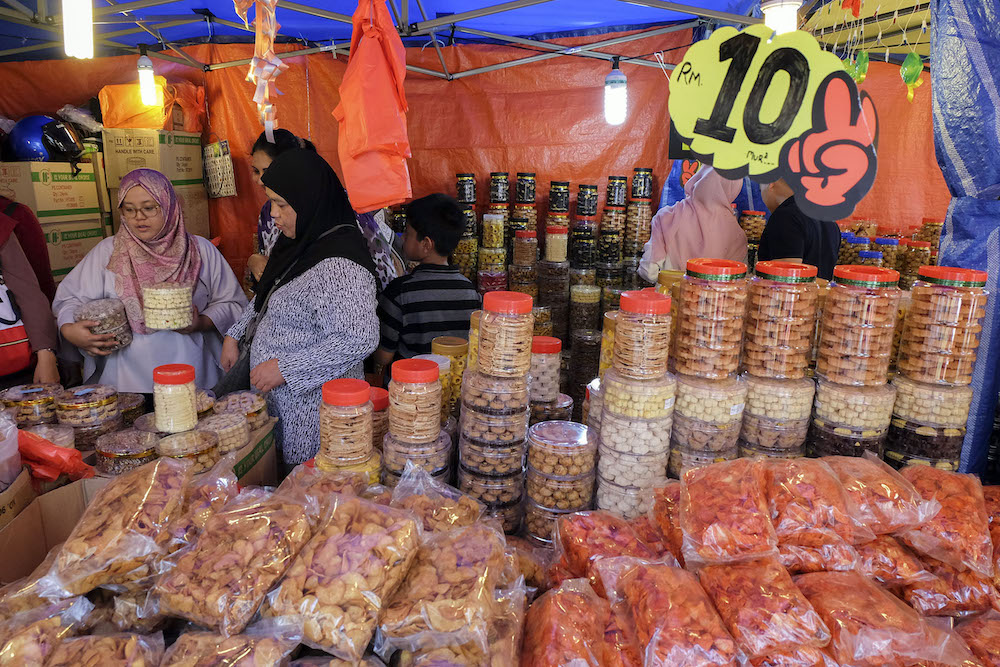 A textual and semiotic analysis of the data has pointed out far more food and dishes are being consumed during Aidilfitri, than would be considered healthy.

“It is common to see words like ‘15 sticks of satay’, ‘three plates full’, ‘going for second to fourth open house’, and even humorous terms like ‘food overdose’, and ‘kumpul lemak lagi’ (gathering fat again) by Twitter users when discussing what they ate for Raya.

“For example, if a small cookie container measures at one litre and can fit 50 pineapple tarts, with each tart containing 40 calories, it comes up to 2,000 calories which is the daily maximum level for an adult male. And this is only from one festive visit, based on our estimation,” she said.

The researcher said per the Malaysian Diet Guide 2010, general intake exceeding 1,000 calories contributes significantly to weight gain, adding that in addition to cultural loss, modern fare consumed during Aidilfitri is considerably higher in calories compared to their traditional counterparts.

“Using the information collected from studies conducted by the Health Ministry and nutrition experts in the past decade, potential health risks in the immediate aftermath of Raya include damage to blood flow, retardation of the body’s metabolism, slowed organ functions, among others.

“In this case, the logical solution is to exercise a high degree of self-control when eating during Raya. As for cultural preservation, I would recommend parents and elders teach the younger generation traditional recipes. Since they can be quite complicated when done properly, you can start with simpler ones, and hopefully it will help to stem the tide of cultural loss,” Junaini said.

Unhealthy dietary habits have become an increasing concern in the country, as Malaysia was ranked as having the highest obesity prevalence in the region.

British research arm Economist Intelligence Unit reported in 2017 that Malaysian obesity prevalence stood at 13.3 per cent, with overweight prevalence at 38.5 per cent.