Datuk Seri Mohamad Hasan shakes hands with Datuk Seri Abdul Hadi Awang during the 65th PAS Muktamar in Kuantan June 21, 2019. — Picture by Mukhriz Hazim
Follow us on Instagram, subscribe to our Telegram channel and browser alerts for the latest news you need to know.
By JERRY CHOONG

KUANTAN, June 21 — PAS and Umno’s political cooperation is only meant to protect Islamic interests but not at any cost to non-Muslims, the Islamist president said at his party’s 65th annual congress here today.

Datuk Seri Abdul Hadi Awang said non-Muslims should not feel anxious about the proactive steps taken by the two Malay Muslim parties to resolve their own community’s problems and improve unity among the ummah.

“Islam requires us to maintain bonds of fellowship among family and race.

“At the same time Islam also commands us to maintain the ties of human relations, based on the concept of a holistic community, one that is fair to all and without coercion into adopting Islam,” Hadi said in his opening speech at the Indoor Stadium of the Pahang Sports Complex here. The Marang MP added that both parties would defend the continuation of a multicultural, multireligious society as referred to in Islam.

He said PAS has proven its commitment to diversity with the creation of a non-Muslim wing in the party while Umno continues to have relations with other races even though it is a party for Malay-Muslim Bumiputera.

He named MIC as an example, saying discussions have been positive, transcending cultural and religious barriers and that they reach understanding on common interests due to mutual respect.

“The information programme via social and print media, especially for non-Muslims, is a primary agenda to provide explanation and clarity to them on what Islam is and PAS’ struggles based on wisdom, no coercion in religion, and fairness for all,” he said. 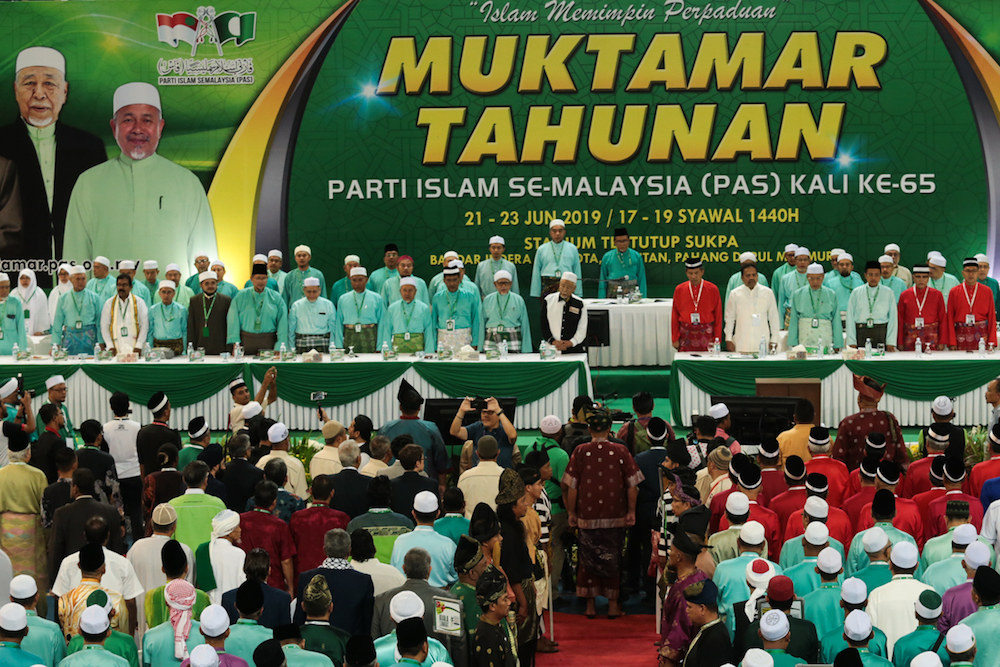 PAS and Umno leaders share the stage during the 65th PAS Muktamar in Kuantan June 21, 2019. — Picture by Ahmad Zamzahuri

Hadi then appealed to Sabahans and Sarawakians, asking them to reject extremism and to preserve communal unity, promising to improve the living standards in Borneo Malaysia but without explaining how.

“PAS is resolved to increase the living standards of Sabah and Sarawak’s Pribumi, and calls upon all parties to strengthen their commitment to the Malaysia Agreement 1963 by rectifying all the weaknesses throughout its implementation.

“This is so the Constitution can be strengthened and the gulf of differences which have existed for so long can be further shortened,” he said.

He cited the separatist conflicts in South Sudan and East Timor as examples and called for the rejection of such obstacles to unity.

“PAS in Sabah and Sarawak will play a role in leading unity by representing the voices of the Muslims amid the racial and ethnic diversity through dialogue approaches and charitable activities, so as to open new vistas of political co-operation which can reflect a harmonious Malaysia,” Hadi said.