Rosmah: A recap of her 19 criminal charges so far

Datin Seri Rosmah Mansor arrives at the Kuala Lumpur Court Complex on April 10, 2019. — Picture by Hari Anggara
Follow us on Instagram, subscribe to our Telegram channel and browser alerts for the latest news you need to know.
By By Ida Lim

KUALA LUMPUR, April 10 — Datin Seri Rosmah Mansor is expected to be charged again this morning under an anti-corruption law on bribery.

This will be the third time Rosmah is in the dock to have charges read out to her.

Here’s a quick recap of the previous charges slapped against the wife of former prime minister Datuk Seri Najib Razak:

On October 4, 2018, Rosmah was hit with 17 money-laundering charges after being detained overnight by the Malaysian Anti-Corruption Commission (MACC).

Out of the 17 charges,  12 were allegedly due to illegal deposits of almost RM7.1 million into her Affin Bank account.

The funds amounting to RM7,097,750 said to be proceeds from unlawful activities were allegedly deposited in 235 transactions between December 4, 2013 and June 8, 2017.

The initial sums were said to involve larger deposits involving six figures up to RM300,000 between December 2013 and December 2014.

In the years after that, more deposits were made involving smaller amounts of cash. As an example, 87 were allegedly deposited between January and November 2016 that amounted to RM510,000 but these transactions involved sums from as little as RM50 to as much as RM9,900 in one go.

The remaining five money-laundering charges concern Rosmah’s alleged failure to declare the same RM7,097,750 amount to the Inland Revenue Board for five tax assessment years from 2013 to 2017 as required under the Income Tax Act.

Rosmah was bailed at RM2 million for this set of offences, which means she does not have to be detained pending the start of her trial. No trial dates have been fixed for this case yet. On November 15, 2018, Rosmah was charged with two counts involving bribery under Section 16(a)(A) of the Malaysian Anti-Corruption Commission Act, over her alleged soliciting and acceptance of bribes.

Rosmah was accused of seeking for RM187.5 million or a 15 per cent cut of a RM1.25 billion project from Jepak Holdings Sdn Bhd managing director Saidi Abang Samsudin at a bistro in Sunway Putra Mall between March and April 2016, in exchange for helping the company to secure the project.

She was also accused of accepting RM1.5 million from Saidi on September 7, 2017 at her Jalan Langgak Duta residence (which she shares with Najib) as a reward for helping the company obtain the RM1.25 billion project via direct negotiations with the Education Ministry.

The RM1.25 billion project was for an integrated hybrid power generation system involving solar panels, as well as the maintenance and operation of diesel generators for the supply of electricity to 369 schools in rural Sarawak.

Rosmah’s former aide Datuk Rizal Mansor was also charged the same day with seeking and receiving bribes for both himself and Rosmah from Saidi over the same project. This allegedly included taking a RM5 million bribe on behalf of Rosmah and RM500,000 for himself.

Rosmah was bailed at RM1 million for this set of offences. No trial dates have been fixed for this case either.

In a statement late yesterday afternoon, the MACC announced that it has obtained consent from the Attorney General’s Chambers to charge Rosmah in the Sessions Court under Section 16(a)(A) of the MACC Act.

The commission arrested Rosmah earlier when she showed up to complete the process of final investigations in relation to the solar hybrid power system case, but released her later on bond. 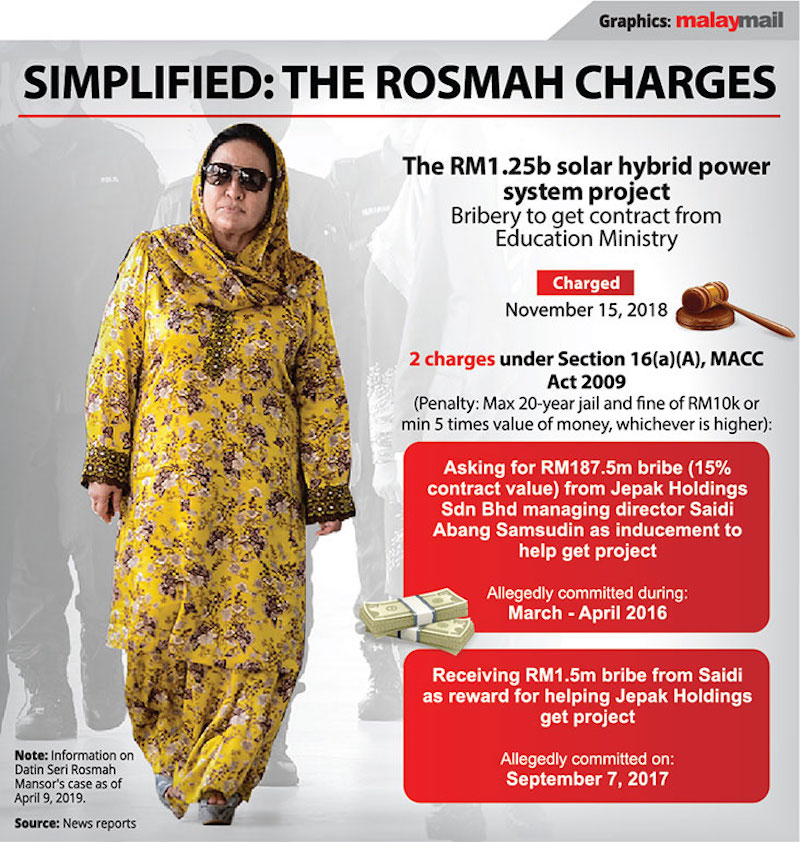 Rosmah’s husband Najib is not expected to show up by her side today as he has two court matters in Putrajaya scheduled for hearing in the morning.

The Court of Appeal is expected to hear the Pekan MP’s appeal to remove former judge Datuk Seri Gopal Sri Ram as the lead prosecutor in his 1MDB cases. Najib had been unsuccessful in his bid at the High Court.

At 11am, a seven-judge panel at the Federal Court will be delivering its decision on four appeals linked to Najib’s trial over RM42 million of SRC International Sdn Bhd, a former 1Malaysia Development Berhad subsidiary.