Transport Minister Anthony Loke and his Singapore counterpart, Khaw Boon Wan, issued a joint statement today saying the agreement was also enforced just before midnight yesterday. — Picture by Shafwan Zaidon
Follow us on Instagram, subscribe to our Telegram channel and browser alerts for the latest news you need to know.

KUALA LUMPUR, April 6 — The Firefly airline may now fly from Singapore’s Seletar airport after Malaysia and the republic struck an agreement to end the airspace dispute between both countries.

“Singapore and Malaysia have agreed that in the spirit of bilateral cooperation, Singapore will withdraw the Instrument Landing System (ILS) procedures for Seletar Airport and Malaysia will indefinitely suspend its permanent Restricted Area (RA) over Pasir Gudang. This agreement was implemented by the civil aviation authorities of both countries on 5 April 2019, at 2359hrs.

“With this agreement, the transport ministers look forward to FlyFirefly Sdn Bhd’s commencement of flights to Seletar Airport effective April 2019,” they said in the statement.

The two noted that a high-level committee has also been set up to review the Operational Letter of Agreement between Kuala Lumpur and Singapore Area Control Centres Concerning Singapore Arrivals, Departures and Overflights 1974.

Loke and Khaw lauded the amicable resolution to the matter and expressed hope for stronger bilateral cooperation in the future.

The dispute had started when Singapore announced in December 2018 its decision to enforce the new ILS on January 3, 2019, which th Malaysia claimed was done without its agreement.

The Malaysian government later said it would seek to reclaim its airspace in southern Johor — which it allowed Singapore to use since 1974 — in phases between 2019 and 2023.

Putrajaya had in December said height restrictions under the ILS would affect the future development of Pasir Gudang in Malaysia, claiming that any structures there must be under the safety height buffer, which was as low as 54m for anything built just 3km away from Seletar.

Singapore reportedly said the ILS does not pose any safety or security risks to operations at the Pasir Gudang port.

In response to the ILS introduction, the Civil Aviation Authority of Malaysia published a Notice To Airmen last December 25, informing the aviation community of its establishment of a permanent restricted area (RA) over the airspace for the purpose of military activities over Pasir Gudang with effect from January 2, 2019.

Singapore and Malaysia agreed on January 8 to temporarily suspend the ILS and RA respectively for one month, with the mutual temporary suspension later extended.

Budget airline Firefly previously had to suspend its operations in Singapore from December 1 after it failed to get approval from Malaysian authorities to relocate its operations from Singapore’s Changi Airport to Seletar Airport. 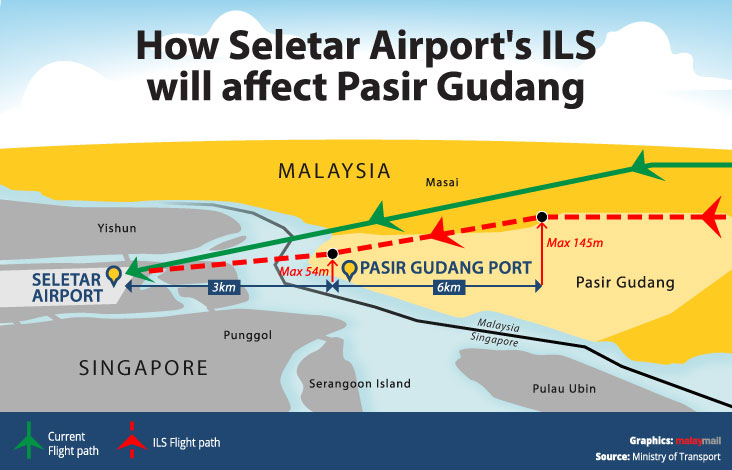 Prior to the costly suspension, Firefly reportedly operated 20 flights daily between Singapore’s Changi Airport and Malaysian facilities at Subang, Ipoh and Kuantan.