Najib’s first-ever trial starts today, so here’s what you need to know

Datuk Seri Najib Razak arrives at the court of appeal in Putrajaya February 11, 2019. — Picture by Mukhriz Hazim
Follow us on Instagram, subscribe to our Telegram channel and browser alerts for the latest news you need to know.
By By Ida Lim

KUALA LUMPUR, April 3 — Datuk Seri Najib Razak will finally face his long-awaited first trial this afternoon, but what is it about and why did it take so long to get to trial?

Here’s a quick and simple guide to everything that you want to know about this trial over RM42 million of funds said to belong to 1Malaysia Development Berhad’s (1MDB) former unit SRC International Sdn Bhd.

Who is Najib Razak?

Some know Najib only as the former prime minister who led the long-ruling Barisan Nasional coalition to its first-ever defeat in history in May 2018, or as the husband of Datin Seri Rosmah Mansor, or as the owner of a cat named Kiky living in a house which carries his favourite number of 11.

More recently, Najib has accepted his role as an opposition politician for the first time in his life, reinventing himself as a seemingly social media-savvy person by proudly declaring himself in January to be the “King of Trolls” as he takes multiple potshots daily at Pakatan Harapan via his Facebook account.

Amid multiple pre-trial court appearances and cameos in by-elections aside from his current day-job as MP, Najib has also adopted the tagline of Malu Apa Bossku (“Why the shame, boss?”) — a phrase which Malay Mail has explained previously.

He started his political career as the youngest MP then at the age of 22 in 1976, charting a meteoric rise to become Pahang mentri besar before even turning 30, before subsequently being the minister for portfolios such as youth and sports, education, defence and finally becoming the deputy prime minister in 2004.

Today is coincidentally the 10th anniversary of when Najib was first sworn in as prime minister on April 3, 2009, a position he held while also being the finance minister until 2018.

With today’s trial, Najib will be the country’s first former prime minister to be tried in court for allegedly committing crimes.

So here’s a quick look at how much life has changed for the former PM since May 2018, including not being able to fly out of Malaysia for now and dropping defamation lawsuits over remarks made over 1MDB: 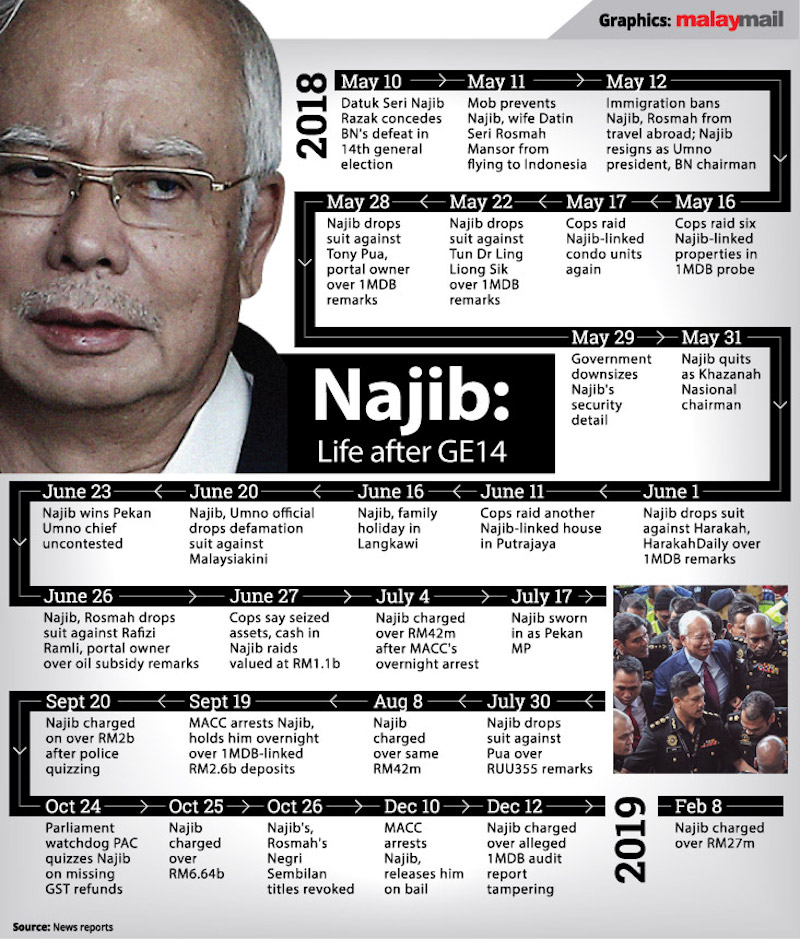 Out of the seven charges, Najib is accused of committing three counts of criminal breach of trust over a total RM42 million of SRC International funds while entrusted with its control as the prime minister and finance minister then, and a separate charge under an anti-corruption law of abusing the same positions for self-gratification of the same RM42 million sum.

If you wonder why it took so long for the trial to start, it is partly due to the normal court process (including the scheduling of trial dates where both the judge and lawyers would find common dates where all parties would be available).

The prosecution had previously said they were ready to start the trial as early as November 2018, but Najib’s lawyers were unavailable during this period, leading to the High Court eventually scheduling February 12 to March 29 as trial dates.

Along the way, Najib’s lawyers also filed four applications including to get a gag order on the media and the public from discussing the merits of his RM42 million case, and appealed all four unsuccessful applications (Remember these appeals).

Najib’s lawyers obtained a court order from the Court of Appeal on February 11 (just a day before the trial date) to temporarily put the trial on hold until one of the appeals was resolved.

Did Najib try to delay the trial?

It really depends on who you ask. The prosecution including the attorney general has alleged that Najib had employed tactics to delay the trial from starting quickly.

On the other hand, Najib’s lawyers insist that they had never tried to delay the trial and that the postponements happened as a result of their response (by filing applications) to the prosecution’s various actions.

On March 28, the High Court fixed today (April 3) for Najib’s trial to start.

On Monday, Najib’s lawyers filed an application to the Federal Court to ask it to review its earlier decision to set aside the stay on Najib’s trial.

When contacted, Najib’s lawyer Muhammad Farhan Muhammad Shafee said the application for review was filed as the legal team felt that the process in how the Federal Court reached its decision when certain court documents were not yet available was “illegal”.

“We didn’t actually file this review with a view to delay the trial. We just thought the decision by the Federal Court needs to be corrected, otherwise it could potentially set a bad precedent,” he told Malay Mail yesterday.

The Federal Court has fixed tomorrow for the hearing of Najib’s bid to review the Federal Court’s decision on lifting the stay on the trial. Tomorrow is also when the four appeals — Najib’s three appeals and the prosecution’s appeal — will be heard.

This means that Najib’s review application could potentially become academic, as it seeks to reverse the Federal Court decision which effectively allowed Najib’s trial to start before the three appeals are heard.

But in other words, Najib’s trial should go on this afternoon as there seems to be no other reasons why it will be postponed. 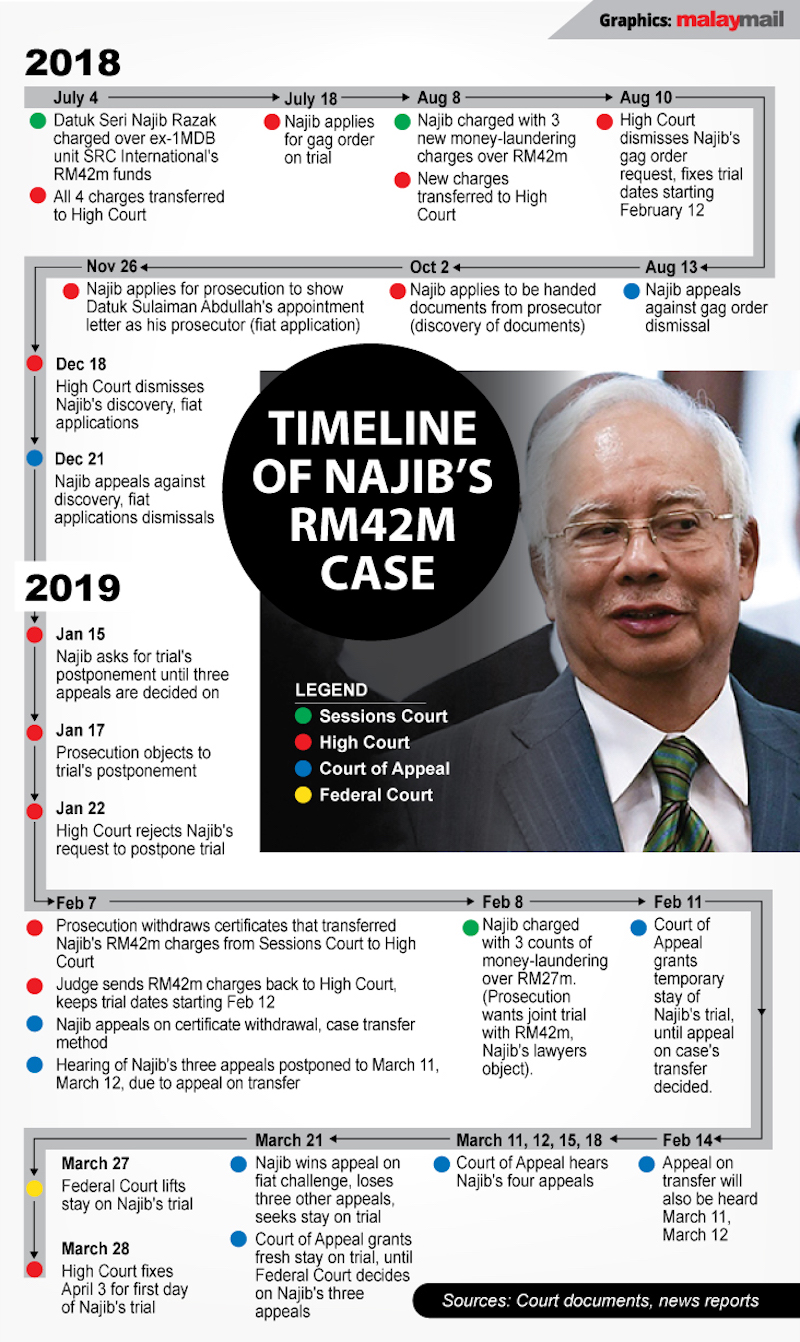 Just days before his trial was due to start, Najib declared on March 31 that he supports the ‘live’ broadcast of his trial as he believed it would aid in transparency and ensure the rule of law, also asserting the public’s right to know the truth.

Deputy Prime Minister Datuk Seri Dr Wan Azizah Wan Ismail had said it will be up to the courts to decide whether to allow such broadcasts, also saying that the Pakatan Harapan (PH) government does not intend to make a “circus” of the proceedings.

Lawyers such as Syahredzan Johan and Ramkarpal Singh have argued against the idea of having a real-time telecast of the trial, with Ramkarpal arguing that Najib could later claim he did not have a fair trial due to possible undue influence being perceived due to trolling from both his supporters and critics.

The judiciary’s corporate communications unit was on Monday reported saying by Bernama: “Trials in any court are not allowed to be broadcast live through any media or be allowed to be recorded”.

According to national news agency Bernama, sources from the prosecution said Attorney general Tommy Thomas will be starting the case today with an opening statement, which will then be followed by the prosecution’s first witness being called to testify.

The prosecution has reportedly asked its first three witnesses — who include government officers and bankers — to be on standby for trial today, but whether all three will be testifying today depends on how fast the proceedings go.

Bernama reported that the prosecution has a list of over 60 witnesses slated to testify in this trial, which will be presided over by High Court judge Mohd Nazlan Mohd Ghazali.

But this is just the beginning and just the prosecution stage where it has to prove it has a prima facie case against Najib for him to answer, with Najib also free to call in his own set of witnesses if he is later asked to enter his defence.

The amount of documents involved is also staggering, with the prosecution early last month saying it had already delivered 31 volumes of documents amounting to approximately 6,500 pages to the defence’s legal team.

This case over RM42 million of SRC International funds is not the only criminal case that Najib has to face in the courts.

There are also trial dates scheduled to start for two other cases ― namely 25 charges over more than RM2 billion of 1MDB funds (from April 15), and also six counts of criminal breach of trust of some RM6.64 billion of government funds (from July 8).

The 1MDB case’s trial dates (April 15 to May 3) could possibly be cleared to make way for the RM42 million trial to be heard first, but this has not been decided yet.

So other than the trial date today, currently the High Court hearing the RM42 million case has not fixed further trial dates.