Najib's trial: Why it was postponed and how soon it can start

But the Court of Appeal last Monday (February 11) granted Najib's request to stay or temporarily pause the trial, until the court decides on a related appeal of the case being transferred from the Sessions Court to the High Court. (More on this showstopper of an appeal later.)

Some may view this request as indicating his reluctance to face charges involving RM42 million belonging to 1MDB's former subsidiary SRC International Sdn Bhd, with PKR deputy president Datuk Seri Azmin Ali even asking on Tuesday why Najib was deferring his trial if he was truly confident of his innocence.

Lawyer Muhammad Farhan Shafee who is on Najib's legal team noted that while Malaysians were keen to have the trial start, “justice hurried is justice buried” especially in the current circumstances of the case.

“The public regardless of which side they support (if any) want to see this trial begin as soon as possible, be it for conviction or vindication of Datuk Seri Najib, or simply for the sheer drama that is likely to unfold.

“However we must always take into account the justice that this case deserves is for all parties including Datuk Seri Najib. That is what due process is. That was the promise ‘Malaysia Baharu’ made to all of us,” he told Malay Mail.

To understand why the Court of Appeal decided on February 11 to stay Najib's trial at the High Court, it might help to scroll back the past events, with the help of court documents made available to Malay Mail.

Najib was charged on July 4, 2018 in the Sessions Court with three counts of criminal breach of trust and one count of power abuse under an anti-corruption law over the RM42 million.

He was then charged again in the Sessions Court on August 8 with three counts of money-laundering over the same amount. 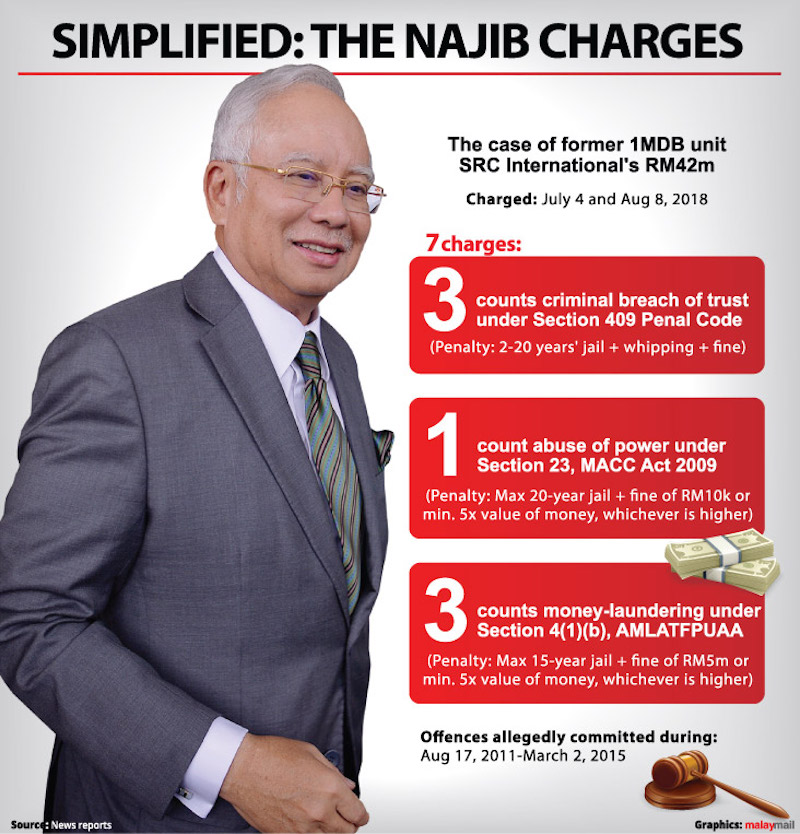 Since being charged until now, Najib's lawyers have filed three applications, namely for a gag order to prevent public discussion of the trial (filed July 18), discovery of documents from the prosecution (filed on October 2) and also for the prosecution to produce the letter of appointment of private lawyer Datuk Sulaiman Abdullah to prosecute the RM42 million case (filed on November 26).

The first attempt to defer trial

As for the current status of this postponement request, Muhammad Farhan said Najib's lawyers did not pursue this further at the Court of Appeal, as both the prosecution and defence later agreed that the “trial can proceed while the three appeals go on in tandem.”

“This is because the three appeals (fiat, discovery, gag order) are likely to not render the trial a nullity if we were successful,” he told Malay Mail, claiming that Najib's team were “not intentionally trying to delay” the trial as they would otherwise have used these three appeals as further grounds to ask for stay.

Pay attention now: What happened at the High Court

Attorney General (AG) Tommy Thomas had previously exercised his powers under the law to transfer the seven charges for Najib's RM42 million trial from the Sessions Court to the High Court, with the latter being more equipped to deal with complex cases.

On February 7 which was just a few days before trial was due to start, the AG made the pre-emptive move of withdrawing the certificates of transfer at the High Court. (This is despite Najib's lawyers never having objected to the certificates of transfer and despite it being an accepted transfer method used for decades. At this stage, the prosecution was already ready for trial the next day, with trial dates fixed about six months ago.)

The AG decided to withdraw the certificates out of an “abundance of caution”, to prevent Najib from suddenly raising arguments in the future that the transfer method was null or to cause unnecessary delay to the trial. (Although no court had said the certificates of transfer were unconstitutional, Thomas' pre-emptive move was due to the new developments in Malaysia's constitutional law with the assertion of the courts' wide judicial powers in two Federal Court decisions in 2017 and 2018 in the Semenyih Jaya and Indira Gandhi cases).

Instead of dictating that the cases be before the High Court by using the certificates of transfer, the AG wanted to use a different approach of having the courts issue orders to transfer the cases in light of the judiciary's wide powers. (This may sound like a mere formality to achieve the same result of having Najib's trial heard at the High Court, but lawyers care a lot about following the correct procedure).

Arguing that the certificates’ withdrawal would automatically send Najib's case back to the Sessions Court, the AG then outlined two options:

2. The time-saving option of the High Court judge deciding on his own initiative (under CPC's Section 417(2)) to order the case's transfer to the High Court now as “expedient for the ends of justice” (Section 417(1)(e) CPC).

1. Yes, the public prosecutor has the power to withdraw the certificates of transfer (and that this does not affect the previous proceedings until now as it does not have retrospective effect);

2. Najib's trial would be transferred to the High Court now (under Section 417(1)(e)) and continued to be tried before the same High Court for five reasons.

(The five reasons are that Najib had previously transferred other cases to the High Court using the same method: the same High Court had already heard three applications related to the case; the case had generated much public interest locally and internationally; and that there is no real prejudice or injustice to Najib as there is no change to the proceedings except the basis of the case's transfer to the High Court; and that Najib himself did not object to the initial certificate of transfer under Section 418A for the RM42 million charges).

Najib's team applied for a stay of trial as they intended to appeal the High Court's decision, but the High Court refused the request as it felt the mere prospect that the trial could later become null does not amount to “special circumstances” to justify a stay. The High Court maintained the trial dates starting from February 12.

Unhappy with the High Court's February 7 decision, Najib appealed the entire decision on the same day. (Here's the showstopper: This is the appeal that is the reason for Najib's trial being postponed now.)

To use a crude analogy, it is akin to a complex case being transferred from a clinic to a hospital, and with no quarrels that the hospital would be where everyone wants the case to go. The dispute is instead on the technicality or procedure of how the case is being sent from the clinic to the hospital.

Nearly there: What happened at the Court of Appeal?

At the February 11 hearing for Najib's application to stay or defer the trial to a later date, Najib's lawyers argued that issues such as the public prosecutor's powers and the High Court's powers should be decided first in the appeal on the transfer before the trial starts.

Najib's lawyers argued that the appeal decision would directly affect the trial, asserting that the trial would be invalid if Najib's appeal succeeds and that this would result in a retrial that would waste the courts' time.

The prosecution headed by AG Thomas highlighted the seriousness of Najib's charges, arguing that it was in the public interest for the trial to start at the fixed date since preparations were complete with documents and 26 witness statements already handed over to Najib's lawyers.

Thomas highlighted that it was also in Najib's interest to have an early trial to avoid any possible prejudicial effects of trial by media as complained by Najib, while also claiming that his past three applications and his latest appeal were part of a strategy to delay the trial.

The Court of Appeal's three-man panel acknowledged the prosecution's arguments, but unanimously concluded that it found that there were “special circumstances” for a stay of the trial.

In granting the stay, the Court of Appeal noted the possibility of the trial later becoming null if it proceeds and if Najib succeeds in his related appeal, and also said it was of the opinion that there was no evidence of delaying tactics by Najib's lawyers.

When asked to comment on the suggestion that Najib was trying to delay the trial, his lawyer Muhammad Farhan said the stay application was not without basis, as the whole trial would be defective and could be nullified if the Court of Appeal agrees with Najib’s argument that the public prosecutor went beyond his powers on the certificates’ withdrawal.

Muhammad Farhan pointed out that a nullified trial would mean a waste of time and with no verdict foreseeable this year, noting that it could also result in a retrial which would be a waste of public funds and which will create further complex legal issues that have to be dealt with before anything else proceeds.

He also highlighted that every case decided in Malaysia becomes a legal precedent for other subsequent cases under the common law system, saying that Najib’s case would “without a doubt” create new laws in Malaysia.

“If we don’t get this right, and the law is put in the backseat just for purposes of rushing this case, other future cases, maybe even people you personally know could be affected. And that would create a rather sad situation towards the Rule of Law,” he told Malay Mail.

So how soon can the trial start?

The prosecution had wanted to quickly have the appeal heard as it believed it was a relatively simple issue compared to the three appeals. The prosecution had said it would ask the Court of Appeal for an earlier hearing date for the appeal, and expressed confidence that the trial could get back on track by the end of this February.

But right now everything will probably be put on hold, as all four appeals (the three appeals and the latest appeal) will only be heard on March 11 and March 12 by the Court of Appeal.

As long as the stay of trial granted by the Court of Appeal is still in place, Najib's criminal trial will not be starting earlier than the above March dates.

While the stay of Najib's trial is only until the Court of Appeal decides on the certificate of transfer issue, it is open for either Najib's lawyers or the prosecution to further appeal to the Federal Court, depending on the outcome. If that happens, that would lead to a longer wait for the trial to start.

There is also the prosecution's plans to ask that the RM42 million charges be heard together with Najib's latest three money-laundering charges over RM47 million. That might again slow down matters slightly, as Najib's lawyers have previously objected to the joint trial.

But is that all?

As a whole, Najib is facing 42 charges, including the seven charges in the SRC trial.

It will be anyone's guess if the SRC trial does eventually become Najib's first trial in the Malaysian courts, as there are also two other criminal cases where trial dates have already been fixed and are coming up soon.

Both cases are to start on April 15 and July 8 ― namely 25 charges over more than RM2 billion of 1MDB funds, and also criminal breach of trust of some RM6.64 billion of government funds. 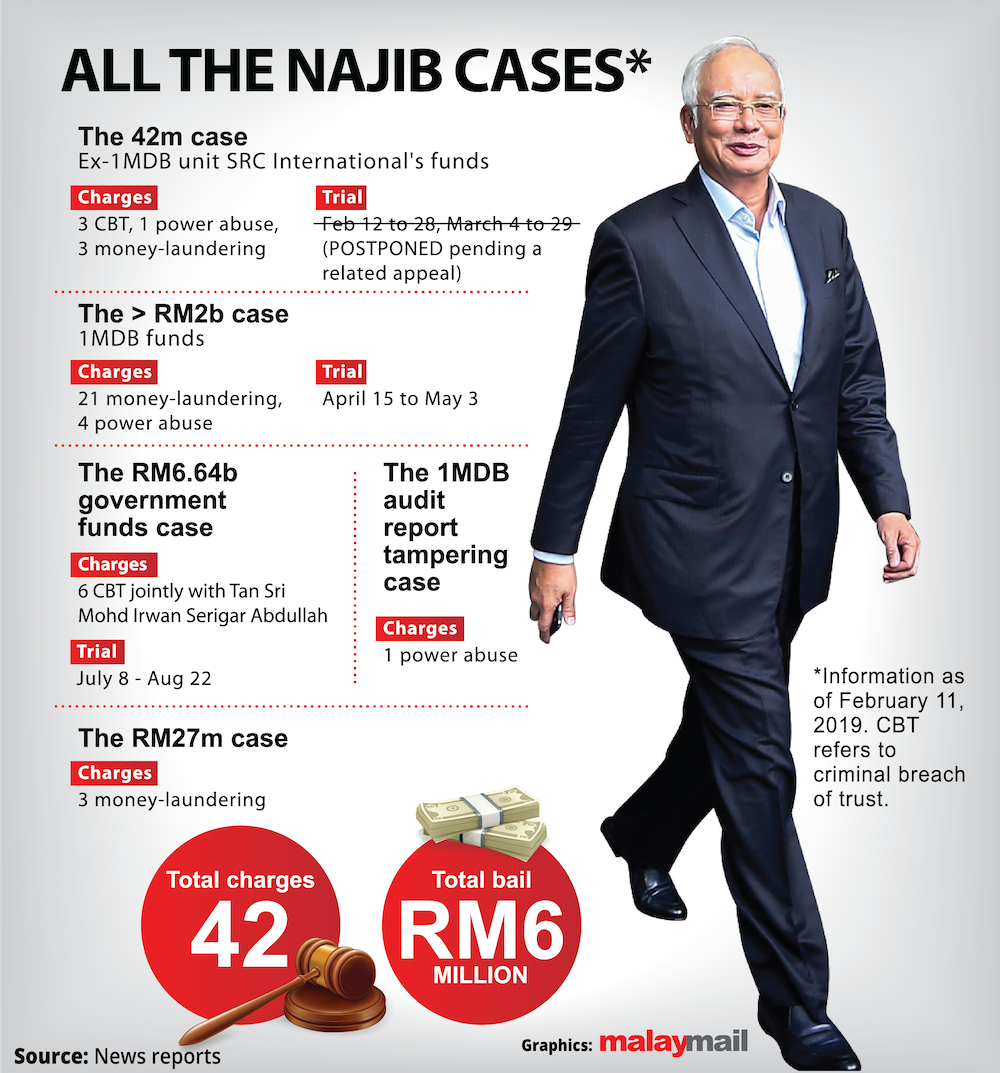