Malaysian Medical Association (MMA) president Dr Mohamed Namazie Ibrahim said only 50,000 people annually diagnosed with one of the 36 critical illnesses, such as cancer and heart disease, from January 1 would benefit from the government scheme.

“There are a large number of existing patients in the B40 (bottom 40 per cent) group who are already burdened with these illnesses and they would be left out,” Dr Namazie told Malay Mail.

Dr Namazie said the 50,000 annual figure is estimated from the RM2 billion contribution from Singapore-based Great Eastern Holdings to mySalam, a five-year scheme for the B40 which will pay out RM8,000 lump sum cash to those insured when they are diagnosed with a critical illness.

“There is no justification for excluding those who were diagnosed with the 36 illnesses before Jan 1 from benefiting from this. This is a typical private insurance type of business model which is unacceptable if we are to have universal health coverage.

“What is required is a better health care financing system based on single-payer, not-for-profit government-run national health insurance that covers all the people,” he said.

The United States’ Affordable Care Act, on the other hand, prohibits insurance companies from charging customers more or denying them coverage if they have pre-existing conditions, or health problems that occurred before the date their health coverage begins.

What is a pre-existing condition?

Typical private health insurance plans, including Great Eastern’s, deny benefits under their critical illness policies if the insured has a “pre-existing condition”, meaning an illness covered under the plan for which she has received or been recommended medical advice, diagnosis, or treatment before the effective date of coverage. There are also usually other exclusions.

This is to minimise the amount of payouts an insurance company makes as people pay the insurance company regular premiums so that if they are hit with a serious disease in future, their health insurance reimburses them for expenses incurred from the illness.

The government’s mySalam website does not specify that coverage will be denied to those diagnosed before January 1 this year, even though Finance Minister Lim Guan Eng had announced it at a press conference Tuesday. Nor does the website list other exclusions.

When asked if someone with a pre-existing condition like diabetes ― which often leads to kidney failure, one of the 36 critical illnesses ― would be covered under mySalam, a Great Eastern Takaful Berhad representative said: “As long as the kidney failure is first diagnosed during the coverage period (1st Jan 2019 onwards) and it meets the terms and conditions of the takaful certificate, the claim amount of RM8,000 will be payable.

“The claim will not be payable if the person has already been diagnosed with kidney failure, which requires regular dialysis or kidney transplantation, before 1st January 2019.”

Great Eastern refused to share the terms and conditions of the mySalam policy with Malay Mail, saying instead that it was currently updating the FAQ on the mySalam website, even as eligible beneficiaries are supposed to be able to file their claims from today. 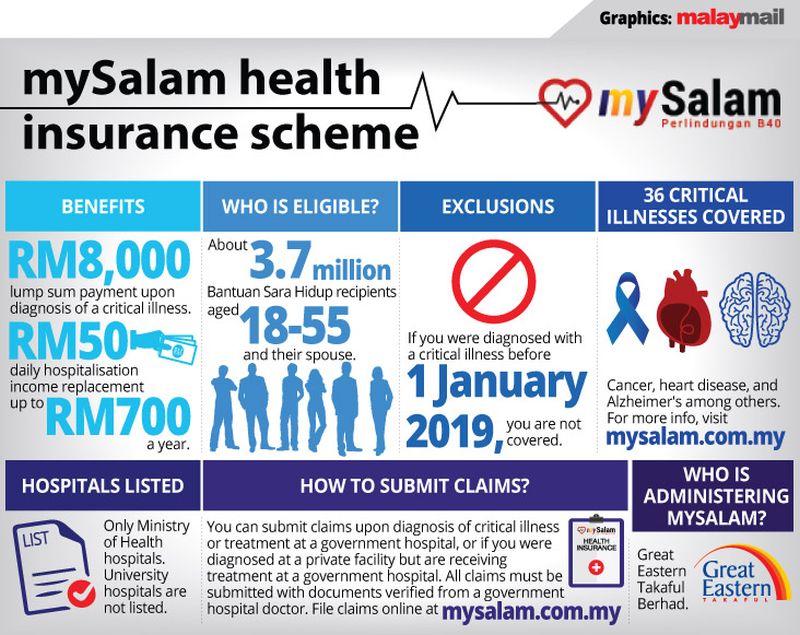 The Galen Centre for Health and Social Policy also expressed concern about the exclusion of pre-existing conditions from mySalam.

“Though the industry standard for critical illness coverage is at least two and a half years of annual income, the payout of RM8,000 will certainly help this group, particularly the families of those afflicted by these illnesses. However, getting this assistance seems to require you to have the right age, right kind of illness, and right time of diagnosis.”

“Unfortunately, this issue as well as the age prerequisite of 18-55 years, omission of key non-communicable diseases and illnesses which disproportionately affect the B40 such as diabetes and mental health, reinforces the perception that the arrangement protects the interests and limits the liabilities of Great Eastern Holdings, rather than prioritise the needs of the most vulnerable among the B40,” Galen CEO Azrul Mohd Khalib said in a statement.

NCDs common among B40

Former MMA president Dr Milton Lum pointed out that if the government is saying that non-communicable diseases (NCDs) like cardiovascular diseases, cancer, and diabetes are more common in the B40, then many of them would have been diagnosed before January 1.

He also questioned if information from the Health Ministry’s Peka B40 health screening scheme would be used by an insurance company to deny coverage to people with NCDs.

“That is the question people are asking in the medical fraternity. On the surface, it seems nothing is going on between the health and finance ministries, but is it a mechanism for people to be left out of coverage?” said Dr Lum.

He pointed out that the objective of national health insurance is to cover everyone, whereas commercial insurance has exceptions in coverage.

“It looks as if this is commercial insurance.”

“We understand that the government has limitations due to the amount of money available in the fund, but this will be unfair to those who are still undergoing the impact of these devastating diseases,” he told Malay Mail.

He pointed out that about 20,000 people are newly diagnosed with cancer every year, out of which less than 40 per cent complete treatment in one year, which means that most are currently undergoing treatment if they were diagnosed in the past two years.

“For these patients, especially those in the B40 who are struggling to complete treatment, the mySalam would be a lifeline and a godsend,” said Dr Murallitharan.

“So, if the money is limited and cannot be stretched, perhaps the government can consider extending it to include patients who are still undergoing active treatment for all the conditions especially cancer?”

He also questioned why university hospitals under the Ministry of Education (MOE) are excluded from mySalam’s list of certified hospitals comprising Ministry of Health (MOH) facilities.

“The university hospitals especially UKM (Universiti Kebangsaan Malaysia), UM (Universiti Malaya) and USM (Universiti Sains Malaysia) in East Coast are in many instances the first line treatment centres. Don't forget that for the public, there is no distinction between an MOE hospital and a MOH hospital.

“It's ridiculous that the public, especially those from the B40, be penalised for administrative differences which perhaps are the only differences between MOH and MOE hospitals.”

The government-run mySalam, which aims to cover 3.69 million people in the B40 group aged 18 to 55 and their spouses, provides a one-time RM8,000 lump sum payment upon diagnosis of one of 36 critical illnesses and RM50 daily hospitalisation income replacement up to RM700 per annum at any government hospital.

But the mySalam website also states “all claims must be submitted along with the required documents verified by a doctor from a government hospital.” Treatment at private facilities is not covered.