PUTRAJAYA, Nov 22 — The Federal Court chose to postpone today its long-awaited decision on whether an illegitimate Muslim child can use his father’s name instead of being forced by the National Registration Department (NRD) to use “bin Abdullah”.

President of Court of Appeal Tan Sri Ahmad Maarop, who chaired the Federal Court’s three-man panel today, unanimously approved the government’s application to defer the decision despite already having prepared to deliver it today.

“We are actually ready to deliver a decision. In fact, our written judgment is ready,” he said, adding that the apex court panel allowed the application to defer after considering the views of all parties involved.

“We order that this decision be adjourned to a date to be fixed,” he said.

When asked by lawyer Datuk Sulaiman Abdullah if the prepared decision and the written judgment would be delivered, Ahmad replied: “I’m not saying any more than what I have said.”

Senior federal counsel Datuk Amarjeet Singh Serjit Singh had this morning requested that the Federal Court defer its decision that was scheduled to be delivered today, in order to allow the government to resolve the matter involving the naming of the Muslim illegitimate child in his birth certificate.

“I’m advised by the Attorney-General that the executive feels it needs to address the matter very carefully,” he told the Federal Court, adding that the executive arm of the federal government wishes to consult a wide range of stakeholders.

“In view of the seriousness of the matter, I am instructed to inform that the executive will commence efforts to seek a solution commencing today,” he added.

K. Shanmuga, a lawyer who represented the Johor Muslim couple who were seeking to remove the illegitimacy tag of “bin Abdullah” from their child’s name, did not object to the request.

“In light of the reasons given by the senior federal counsel and the indication that the executive would themselves find a solution, I would agree with the request for an adjournment.

“And given this involves the best interests of the child and there are other children in similar cases, executive or legislative action may be the most suitable avenue to resolve this. Because of that, I would agree to the request,” he said.

Sulaiman, who represented the Johor Islamic Religious Council who intervened in the case, had earlier objected to the application for the decision to be deferred.

“This is evidently a legal matter involving the unalterable laws of Islam and hence the issue that arises, I would submit, is not something that can be settled by executive or legislative means,” he said.

Sulaiman argued that the government lawyers should not have raised this request to defer the decision at the last moment, but should have raised it earlier in October when there was a seven-man panel convened to rehear the case due its status as a public interest case.

The Chief Justice had in October decided that the seven-man panel would not rehear the case, but would let the remaining three judges of the initial five-man panel that had heard the case in February to deliver its decision.

Sulaiman also argued that the country has seen many examples of festering problems after solutions sought fail to materialise, adding that it would be unfair for his client to go through another hearing again if one or more of the judges on the three-man panel retires by the time the decision is to be delivered.

“There must be some finality to this case, nothing can be more final than a court decision,” he said.

The two other judges today are Federal Court judges Datuk Seri Balia Yusof Wahi and Tan Sri Aziah Ali. Both of them are serving their six-month extension after reaching age 66, with Balia Yusof expected to retire next year and Aziah believed to retire this month.

The two other judges on the initial five-man panel, then Chief Justice Tun Md Raus Sharif who chaired the panel and Federal Court judge Tan Sri Hasan Lah, resigned in July and retired in September respectively.

Hope for all Muslim illegitimate children?

When met outside the court, Amarjeet confirmed that the solution sought by the government would be an “overall solution” for all Muslim illegitimate children facing the “bin Abdullah” problem and would not be limited to the child in this lawsuit, saying: “It is wider than one case.”

He said there was no timeframe fixed for the government to find a solution to the issue.

When asked what would happen if one of the three judges retires, Amarjeet said there would have to be a fresh hearing by the Federal Court if a decision is required.

“If one of the judges retire, then there are only two left. And two judges cannot deliver a decision, then if at all anything happens, you have to rehear the whole appeal again.

“But as the government pointed out, the best solution is not through the courts, it's elsewhere,” said Amarjeet who heads the Attorney-General's Chambers' civil division.

On September 3, 2015, the Johor Muslim couple — given the initials of M.E.M.K and N.A.W — and their child had filed a judicial review application against the NRD, the NRD director-general and the government of Malaysia to seek the change of the “bin Abdullah” patronym to the father’s name in the birth certificate.

The High Court had on August 4, 2016 ruled that the NRD director-general’s refusal to change the “bin Abdullah” patronym in the birth certificate of the Johor Muslim couple's child was lawful.

But the Court of Appeal had on May 25, 2017 unanimously delivered a landmark ruling that quashed the NRD director-general’s decision to use “bin Abdullah”, also ordering the official to correct the patronym in the birth certificate as the official had no powers to override the father’s wishes and statutory right to have his name used.

The Court of Appeal had also noted that the NRD director-general's decision to use “bin Abdullah” was based on two fatwas or religious edicts, but ruled that a fatwa is not law and has no force of law and cannot form the legal basis for the official's decision.

The NRD had then appealed to the Federal Court. 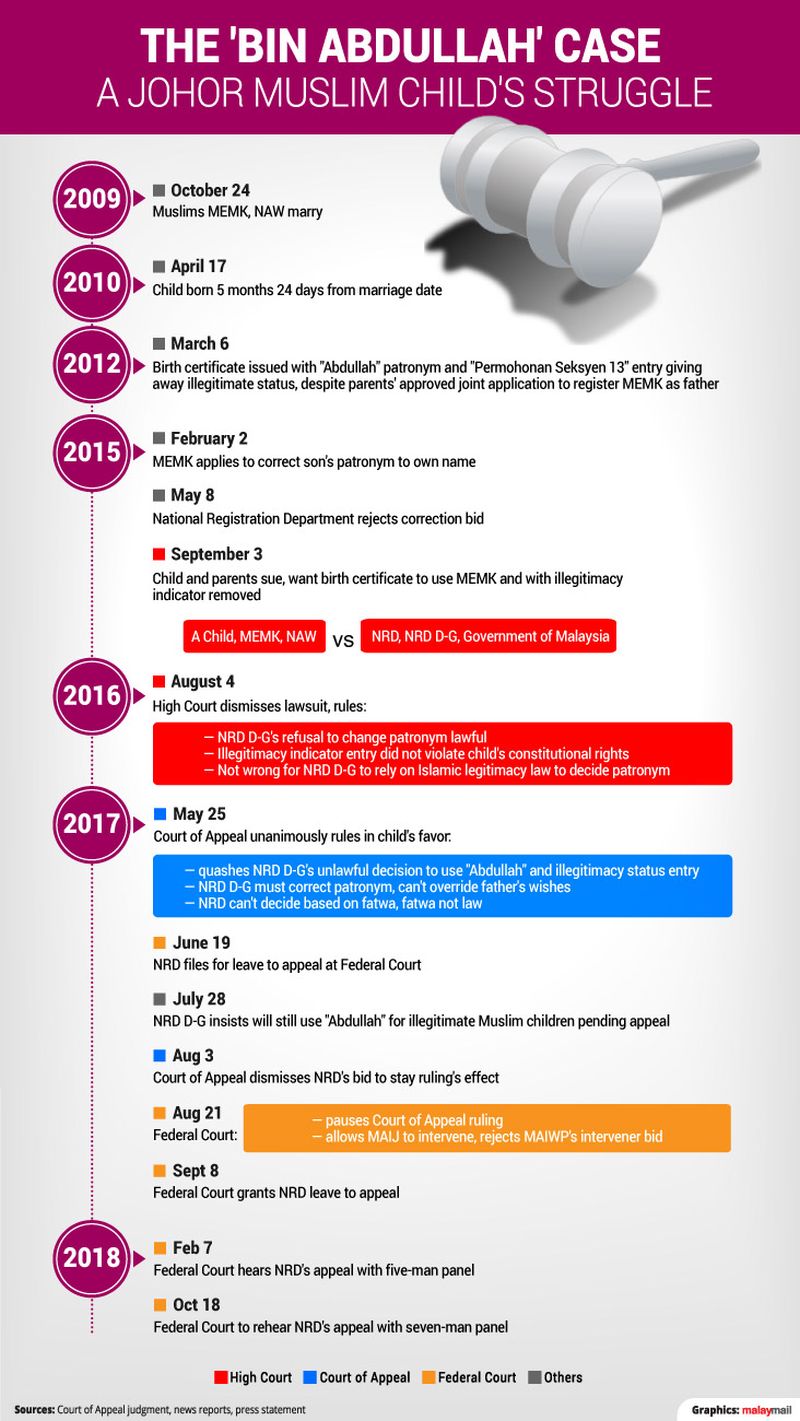