KUALA LUMPUR, Nov 7 — Several economists have warned against some points in Budget 2019, including Putrajaya’s target of 3.4 per cent fiscal deficit-to-gross domestic product (GDP) ratio and the proposal for a tax on sugary drinks.

Kenanga Investment Bank Bhd’s economist Wan Suhaimie Wan Mohd Saidie said the deficit target will be a challenging one due to the global economic slowdown, which among others is influenced by the trade war between the United States and China.

“I think 3.4 per cent for next year is a bit challenging given the fact that the global economy is slowing down and that will affect the overall outlook of deficit, I see the deficit at 3.5 per cent,” he said at the Malaysian Economic Association’s 2019 Post Budget Dialogue here.

Wan Suhaimie also echoed embattled former prime minister Datuk Seri Najib Razak’s warning against relying too much on the Brent Crude Oil price of US$70 per barrel, citing the fluctuating price of commodities.

“I’m sure it’s a one-off thing [to base the Budget on the oil price] but I did a sensitivity analysis on oil prices. Let’s say we don’t achieve the target of US$60 to US$70 per barrel, this will make our deficit higher.

“If there’s a possibility that the oil prices drop below US$70 per barrel, the budget deficit will be slightly wider, around 36 to 39 per cent of the GDP,” the Kenanga head of economics research predicted. He also pointed out that a strong US dollar will also put pressure on oil prices, which in turn will place more pressure on commodity prices.

Putrajaya had revised its deficit-to-GDP ratio this year from 2.8 per cent to 3.7 per cent, and also abandoned its earlier target of balanced budget by 2020.

“You have to properly define all these sin tax. On one side, if it achieves its purpose and people correct their behaviour, the government will lose revenue on that sector,” said the economist.

In Budget 2019, Putrajaya had announced a 40 sen per litre tax on soft drinks and juices starting April 1 next year.

Despite that, Wan Suhaimie commended the government’s move to pay off the Goods and Services Tax (GST) and Income Tax refunds by next year instead of spreading it out over the next five years.

The economist said it is better to endure the pain as soon as possible and enjoy a faster recovery over the next few years instead of taking it slowly.

State oil and gas giant will be contributing a one-off RM30 billion special dividend to Putrajaya next year, in order to settle the RM37 billion outstanding tax refunds left behind by the previous Barisan Nasional administration. 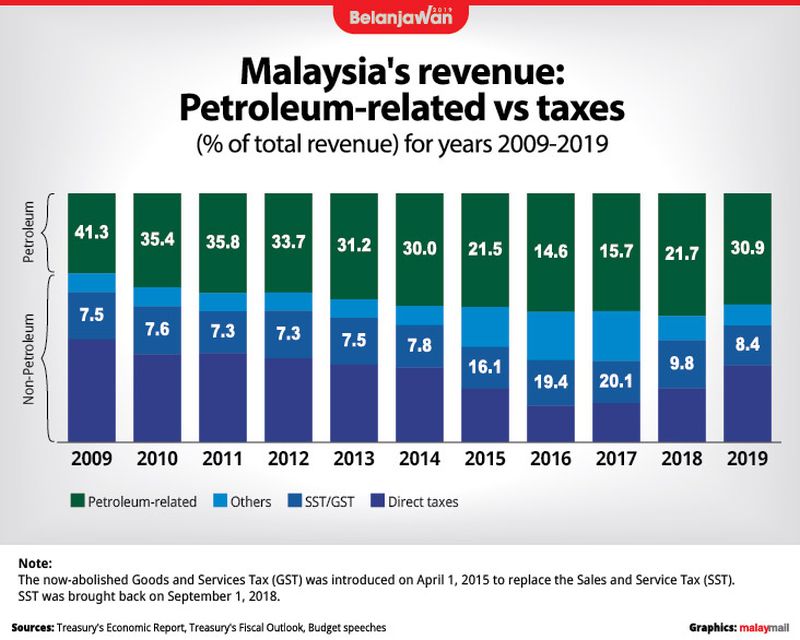 Wan Suhaimie also lauded the government for doing its best to restore public trust, saying it is “the most valuable commodity”.

“There’s this thing that I would like to highlight on the Budget report, the government mention about restoring trust,” he said.

“That is the most valuable capital than anything else, not making money or generating revenue but restoring trust. Apart from trying to reduce deficit, it is also important to reduce trust deficit which has been quite bad over the past how many years.”