Zaihani, known as Kak Zai in the fashion industry, said those who weigh above 60kg should not be attending fashion shows, prompting criticism from the public.

Front row HEAVY WEIGHTS... fashion royalty...sizes and weight ..NO ISSUE..I love SUZY MENKE ,ANDRE LEON TALLEY and ANNA WINTOUR has no issues with sitting next to them [email protected] @zetyanuar

In her second post, the Bornean designer shared pictures of her younger self and one with the Hermes brothers in Paris, France, depicting changes in her weight.

“[I’ve] been many kilos different and done and attended many shows globally but never has weight been an issue,” captioned Tom in the post.

A designer i admire from jakarta ..our pics in.our younger designing days 1985..and quite recent in our early 60s n( grandmothers ) in.paris with Hermes brothers ..we both hv journeyed all over the world for our work or pleasure n always true to our countries heritage .. hv been many kilos different and done n attended many shows globally but nvr has weight been an issue..but we always hv passion in our craft and chosen career [email protected] @jannasoekasah.joesoef @imanlough

Batik and songket designer Adila Long also hit back with an Instagram story post with a screengrab of Zaihani’s message along with the captions, “I don’t understand why people still kiss ur @$$ and think you’re a guru.” 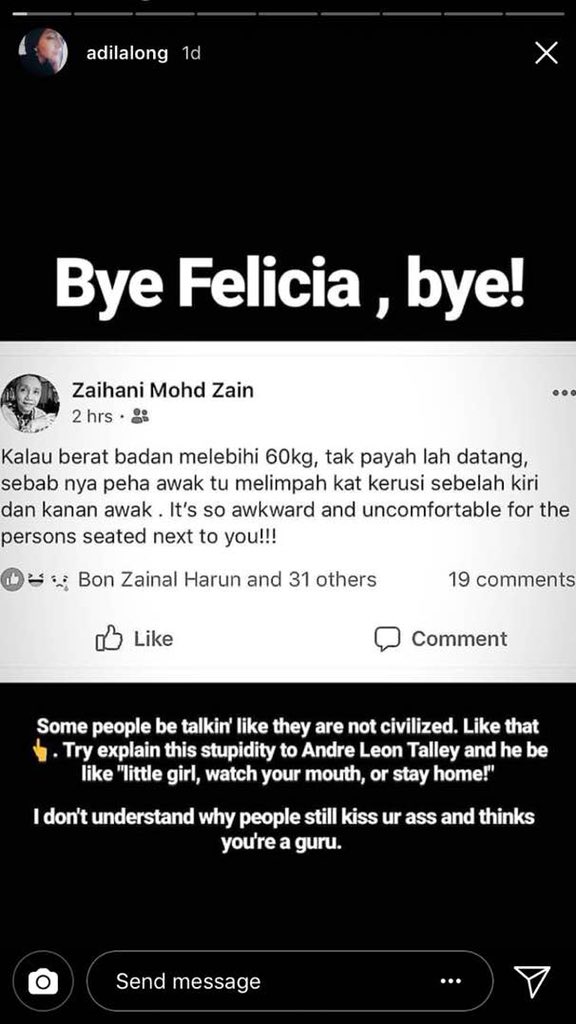 Model Alicia Amin, known for her outspoken views about the fashion industry and women’s body image, said it was time to stop body shaming and called for more “socially conscious” fashion personalities.

Our industry has no more room for cattyness. Maybe it time for the veterans to make way for more socially conscious, fresh people. #pahamelimpah #StopBodyShaming pic.twitter.com/Ymw1L03S8H

Zaihani, a celebrated fashion stylist and critic said sitting next to a plus-size person whose thighs were spilling over was “awkward and uncomfortable”.