How GE14 spending will boost the economy...but not the way you think

KUALA LUMPUR, April 14 — As Malaysia gears up for the 14th general election (GE14), the economy will be sure to get a bump from the spending that goes hand in hand with election campaigns.

Just how much money are we talking about?

For a start, the Election Commission (EC) has already said it needs an estimated RM500 million to run the entire general election this year. It previously said the expenses include rental costs, equipment procurement and allowances.

That might seem like a big amount, but the government had previously allocated a maximum of RM400 million for the 13th general election in 2013. In comparison, RM85.4 million was spent for the 2016 Sarawak state election, which involved 82 state seats.

The Election Offences Act 1954's Section 19 imposes legal limits on election spending for candidates for state seats to RM100,000, while those contesting parliamentary seats can spend a maximum of RM200,000.

Anyone who knowingly spends beyond these amounts will be guilty of an illegal practice.

Going by the assumption that there will be at least two candidates for each of the 505 state seats throughout Malaysia (excluding Sarawak), they can collectively spend a maximum of RM101 million.

Again going by the likelihood that there should be a minimum of two candidates for the 222 federal seats nationwide, they can together spend a total of RM88.8 million.

And this figure does not take into account the potential election spending by political parties, who do not face any legal limits for such expenditure. 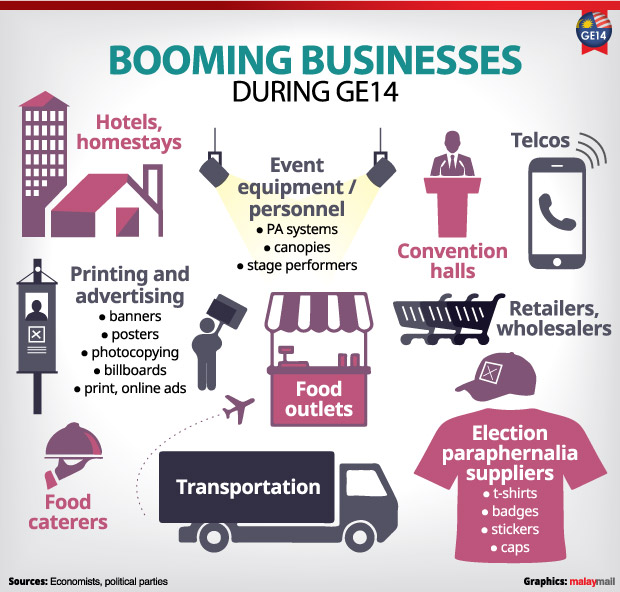 Maybe even up to RM1b

Yeah Kim Leng, professor of economics at Sunway University Business School, weighed in on Malay Mail's estimate of about RM600 million to RM700 million for direct election expenditure, saying that it will still contribute to a spending increase but will likely not be significant enough to show up in the country's overall Gross Domestic Product (GDP).

"So RM600 million to RM700 million compared to overall GDP of almost RM1.4 trillion, the spending amount is very marginal as a percentage of overall GDP," he told Malay Mail when contacted.

Yeah said there will also be indirect election spending that will boost the economy during the campaign period, namely the additional amount of unofficial funding by political parties that give handouts to voters and also the spillover effect on businesses.

"The other one is the multiplier effect of the spending increase, because it will increase demand for other sectors including transport, printing of banners and posters, benefit these suppliers; and of course during the campaign period, hotels and places where people gather will see increased business," he said.

Yeah said the combined direct and indirect spending can easily go up to RM1 billion or RM2 billion, but noted that it would be hard to quantify these projections since there are no official figures.

"Of course we can't forget all the goodies that have been dished out since the beginning of the year, so the goodies will be more important in increasing purchasing power. These will have a greater impact in terms of reach and also size of the injection," he said.

Even before the election, the federal government led by Barisan Nasional (BN) announced a RM2 hike in hourly allowances to the three million People's Volunteers Corps (RELA) members, and RM1.46 billion for the July salary hike of 1.6 million civil servants.

In its manifesto, BN promised a special increase to the amount of BR1M cash aid given out this year by an additional RM150 to RM800 if voted in.

Just going by the March 31 figures by the Finance Ministry where RM6.12 billion is to be dished out this year to over seven million recipients, the BN manifesto would increase disposable cash in eligible Malaysians' pockets by over RM3.6 billion.

This additional figure could be higher, given the promised creation of two new categories of cash hand-outs under BR1M if BN is returned to power.

Like the goodies in the election year, voters' uncertainty over the elections and its results could also have a greater impact on the Malaysian economy as compared to election spending, Yeah said.

Yeah said the expected economic boost in the first half of the year from election spending could be offset by some businesses and individuals that are now holding back on major spending decisions until the election period is over.

"That is the unknown factor, to what extent business and households keep their spending on hold because of elections. Consumers ― in cases of big-ticket items; and businesses ― any major investment decisions, big projects," he said.

As for whether normal spending behaviour and normal economic activities will resume after the election results are out, Yeah said it would depend on whether there is lingering uncertainty over the possibility of policy changes such as the tax regime used.

Concerns over how policies may change would be present regardless of whoever wins and forms state governments and the federal government, he said.

"The key here is consumer and business confidence. If it's not affected, the economy will continue its current growth momentum. Any impact would be one-off.

"We have gone through many elections, the level of disruption to the economy is actually minimal. Importantly they have to ensure that business and consumer confidence are not affected," he said.

Lee Heng Guie, executive director of Socio-Economic Research Centre, said there will be some effect on the economy from increased spending for "election fever", but likened the brief period to seasonal and temporary boosts seen during festive periods, carnivals and "football fever."

"It will create an election atmosphere just like New Year effect, Hari Raya, but this one will be more there will be a lot of campaigning," he told Malay Mail, noting that political parties on both sides of the divide are expected to aggressively campaign in GE14.

He listed out various activities during the campaign period, such as fundraising dinners where tickets for each table can cost up to RM1,000; donation drives; peripheral effect from people attending ceramahs with peddlers, mamak eateries, coffee shops to enjoy good business as people gather to talk politics.

He said telecommunication companies would also benefit from the increased use of phone calls, text messages and social media during the campaign period, while retailers and wholesalers will also be aided by those buying basic necessities such as rice and cooking oil as gifts.

"There will be spillover effect ― people buying in bulk to send to rural villages gifts in kind; or in hotspot areas with fierce fights, earlier bookings of homestays, budget hotels and convention halls," he said, also questioning whether there are transparent audits on the actual amount of money spent by election candidates during the campaign period.

MCA youth chief Datuk Chong Sin Woon said consumer spending will certainly increase as many will come out to attend rallies, listen to talks and do things such as buying newspapers.

Parti Pribumi Bersatu Malaysia policy and strategy bureau chief Datuk Rais Hussin Mohamed Ariff said the impact of election spending will at best give a "very pocketed" or limited impact on the economy, noting that it is "seasonal" in nature and only for a short period.

"The promises though, if realised, will be more far-reaching!" he said.

Parti Amanah Negara strategy director Dzulkefly Ahmad said that the election campaign period will "spur spending" with the second quarter of 2018 to see a growth in domestic demand, predicting that there might be a "lull" after the elections.

He told Malay Mail that the service industry, food outlets, retail outlets and those supplying election paraphernalia such as T-shirts will benefit.

Yeah said that although share prices on Bursa Malaysia are "likely to be volatile" during the election period, external factors such as the threat of a full-scale trade war between US and China would have a greater impact than election results.

This is because both the leading coalitions are "seen to be pro-market and pro-business", he said.