KUALA LUMPUR, Oct 19 ― The Arabic word “Allah” is not exclusive to Islam and is not a copyrighted word that non-Muslim communities cannot use, the High Court was told today.

Lim Heng Seng, the lead counsel for his Bahasa Malaysia-speaking Bumiputera Christian client Jill Ireland Lawrence Bill, refuted the claims by a Home Ministry official and two expert witnesses for the government that both the Federal Constitution and the al-Quran states that the word “Allah” is exclusive to Islam.

“With all respect, nothing in the Federal Constitution says ‘Allah’ is exclusive to Islam, neither is there in the al-Quran,” he told the High Court.

“We also have views of experts not only locally in Malaysia, but also international experts that say ‘Allah’ is not exclusive to Islam and that while Christians and Muslims have different understanding of ‘Allah’, there is no claim to exclusivity,” he said.

Lim said that a difference in theology should not result in local BM-speaking Christians being banned from using the word “Allah” which has been adopted into the national language, pointing out that the issue before the courts is not a “copyright” matter.

“There is no copyright to the word ‘Allah’ so to now say that ‘we have the exclusive right to use the word and the use by others is infringing our rights’ is not before the court,” he said.

Lim said the actual issue before the courts revolves around whether the word “Allah” is integral and important to the religious practice of local Christians, noting that the best persons to testify on this would be local Christian leaders instead of the two expert witnesses for the government.

Mansoor Saat, a lawyer who also represented Jill Ireland, read out verses from the Muslims’ holy book al-Quran as mentioned by Muslim experts regarding the acceptance of non-Muslims’ use of the word “Allah”.

“The word ‘Allah’ is there even in the original text of the al-Quran...This is the proof that whether you are Muslim or non-Muslim, at the point of revelation, they all refer to their concept of God as ‘Allah’,” he said, having read Surah 29’s verses 61 and 63 and Surah 31’s verses 25 and 26.

Lawyer Annou Xavier, who also appeared for Jill Ireland, noted Ng had also listed multiple Malay translations of bibles and Christian publications featuring the word “Allah” to as early as 1629 that showed BM-speaking Christians’ historical and generations-long use of the word.

“Further, the father of modern Malay literature Abdullah Munshi had translated the Gospel book to a Malay translation in 1852 and had translated ‘God’ as ‘Allah’,” he said when reading out an excerpt taken directly from Abdul Aziz’s affidavit.

Lim noted that Mohd Sani had touched on the scholar popularly known as Munshi Abdullah as well, but said: “He points it out as personal sensitivity, but not to the extent to say linguistically it is wrong or there is a public order issue”.

Today is the hearing of Jill Ireland’s bid to have the courts uphold her constitutional rights, following the government’s 2008 seizure of her eight compact discs containing the word “Allah” which were for her personal use and its justification of the seizure using a 1986 ban on "Allah" in Christian publications..

Jill Ireland is seeking two court orders, including a declaration that it is her constitutional right to have access to Christian publications in the exercise of her rights to practise religion and right to education, as provided for by the Federal Constitution’s Article 11 on the freedom of religion.

The Sarawakian native of the Melanau tribe is also seeking a court declaration that the Constitution’s Article 8 guarantees her equality before the law and protection from discrimination on grounds of religion in the administration of law ― specifically the Printing Presses and Publications Act 1984 and the Customs Act 1967.

Jill Ireland is also asking the court to declare the Home Ministry’s December 5 1986 circular to ban the word “Allah” in Christian publications as unconstitutional and unlawful, arguing among other things that the government has failed to prove such use was a threat to public order.

The hearing before High Court judge Datuk Nor Bee Ariffin resumes on November 2, where senior federal counsel Shamsul Bolhassan is expected to present arguments for the Home Minister and government who are both respondents in Jill Ireland’s lawsuit. 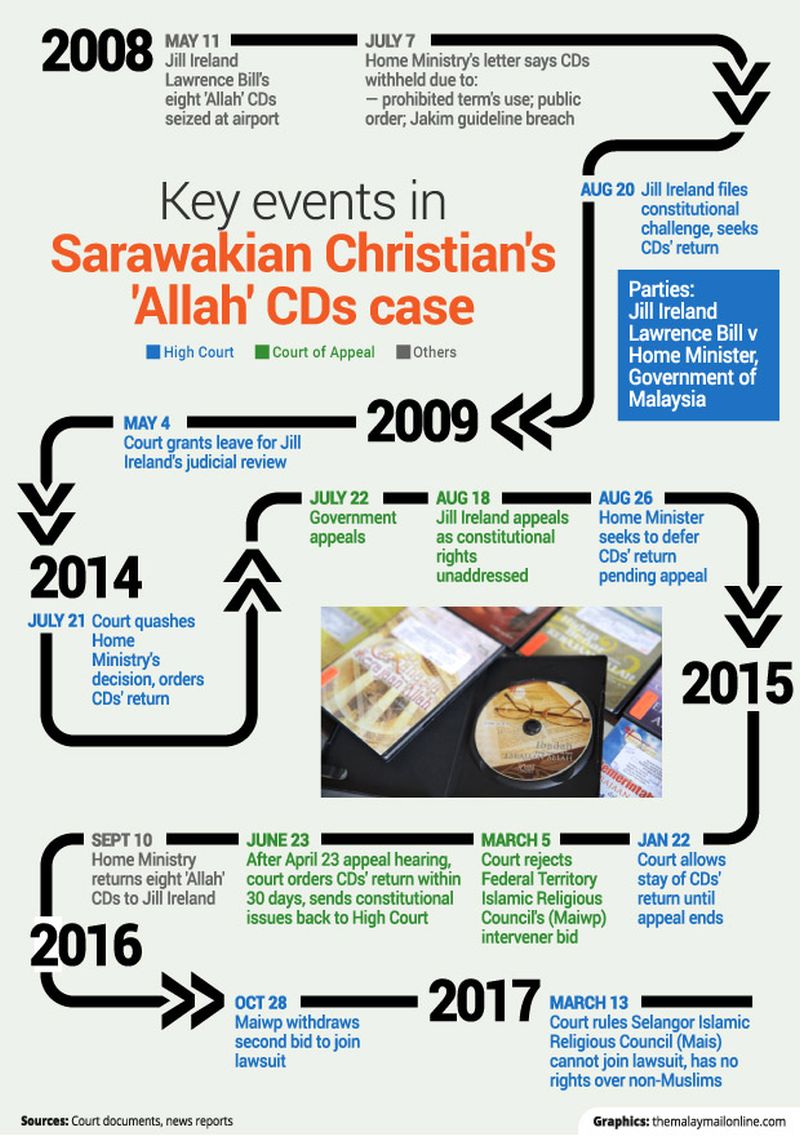