KUALA LUMPUR, Nov 8 ― In Anna Maria Pereira's home in Pandan Indah, a statue of Virgin Mary has allegedly been releasing oil from its eyes for the last two years and, since three months ago, honey.

Pereira, 37, said the multiple “miracles” have drawn thousands of visitors, some from as far as Australia and the UK, to her home over the past two years, despite the sightings not being reported publicly until earlier this week.

“We even had about 600 people coming at one time, three buses from Penang, two buses from Malacca. That time people just came, through word of mouth, they just travelled, so people came without appointment,” the third-generation Catholic told Malay Mail Online in a recent interview at her house.

According to Pereira, it all started in September 2013 when a painting of the Divine Mercy she purchased from the Sacred Heart Church in Kuala Lumpur started releasing oil at the point of Jesus's hands and feet, and heart.

The painting that was then a year old also released “traces of blood” during last year and this year's Lent seasons ― the annual forty-day period of fasting and prayer before Easter ― Pereira claimed. 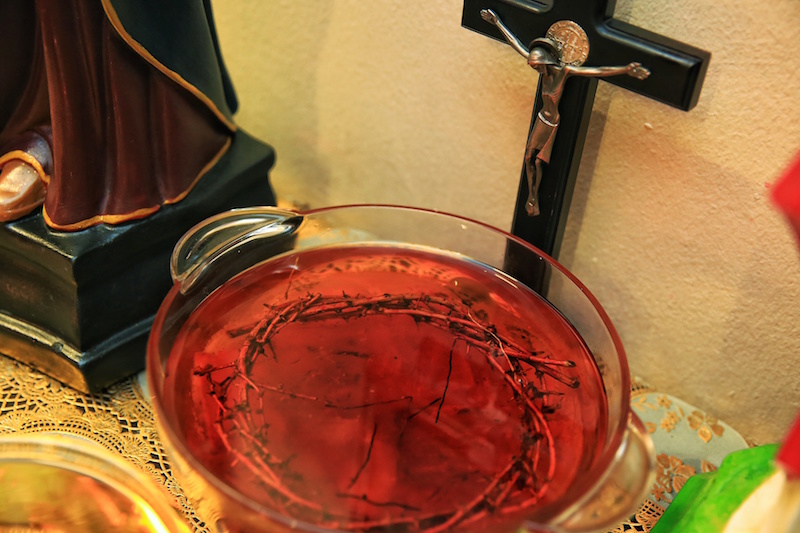 The "Crown of Thorns" is seen submerged in the blood and oil mixture that has been collected in a glass bowl. ― Picture by Saw Siow Feng Catholic priest Fr Albert Leon lifts a sample of the mixture allegedly released by the Divine Mercy statue, said to be a mix of oil, blood, water and honey - with the denser red liquid settling below to show two distinct layers. ― Picture by Saw Siow Feng 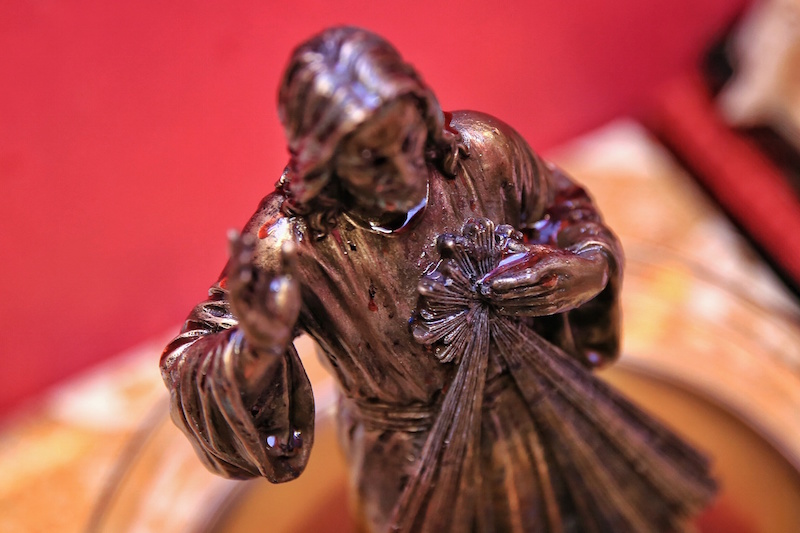 The bronze Divine Mercy figure is shown with an alleged mixture of blood and oil flowing from it from the heart area where a hand is placed. ― Picture by Saw Siow Feng 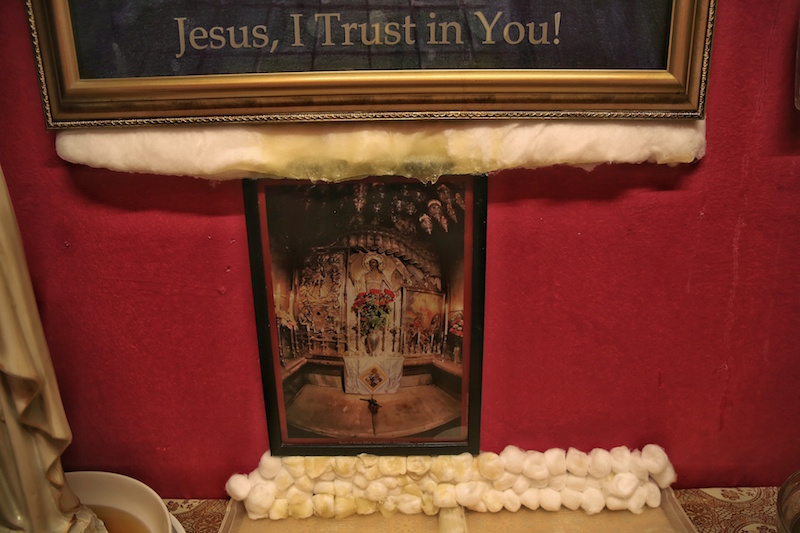 Cotton wads below the Divine Mercy painting is seen absorbing the oil, which Pereira said have been released since September 2013. ― Picture by Saw Siow Feng 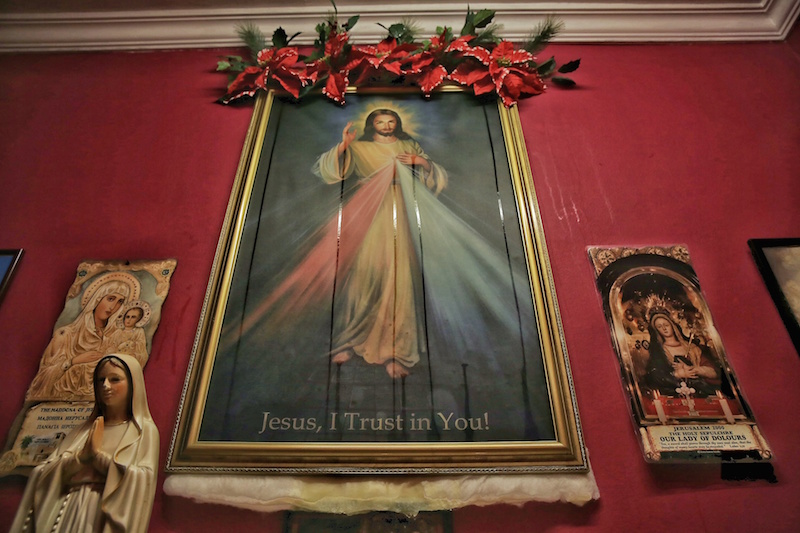 The Virgin Mary statue is shown with the Divine Mercy painting, which has trails of what is believed to be oil flowing from the hands and feet of the depicted Jesus. ― Picture by Saw Siow Feng 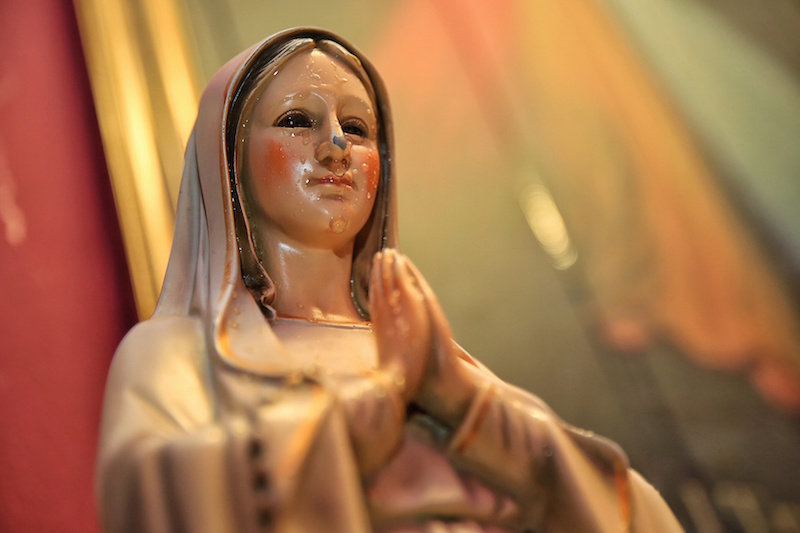 The Virgin Mary statue, which allegedly released oil from her eyes two years ago and now honey since the last three months, is located in a Pandan Indah house. ― Picture by Saw Siow Feng

As for the Virgin Mary statue of a “stone” material that she bought eight years ago from St Anthony's Church in Kuala Lumpur, it started releasing oil in October 2013 from the eyes, she said.

Over the past three months, however, Pereira said the statue has been releasing honey, mostly from the eyes and occasionally the head.

A Crown of Thorns ― a crown made from a thorn bush ― that was purchased by Pereira's family during a pilgrimage to Jerusalem in April 2013, also started releasing oil also in October 2013, Pereira said.

But since Lent last year, the crown has been releasing a mix of oil and a red liquid she believes to be blood..

The fourth “miracle” involves a bronze Divine Mercy statue from Poland that was gifted to Pereira last July. Like the crown, Pereira said this statue has been releasing what appears to be blood and oil from the position of the heart, where one hand is placed.

All these “miracles” have continued on to this day, Pereira claimed, adding that she was uncertain why they have occurred apart from feeling that it is a direct call to the Catholic community to repent and return to God.

Fr Albert Leon, a Catholic priest from India who dropped by just the day before he was due to end his one-month stay in Malaysia, tested a drop of “honey” from the Virgin Mary statue and also the accumulated oil and blood mixture in a bowl where the Divine Mercy statue was placed.

He said the Virgin Mary is venerated along with Jesus in the Catholic Church and is a symbol of mercy and love, adding that this miracle would typically lead to an “apparition” where humans would receive a divine message.

“So I'm very happy that this miracle should be promoted to all the people so that God's presence can be felt by people, we must be God's people, this miracle invites humanity to be very close to them, that is the message,” the Capuchin priest from the St Francis of Assisi church in Tamil Nadu said.

A 71-year-old Catholic man from Puchong, who was visiting to view the statues for the first time, told Malay Mail Online that he had also gone to visit the Virgin Mary statue at Subang Jaya's St Thomas More church ― which was reported last month to have released tears.

“I believe, I believe. Honey doesn't just flow like that, blood doesn't flow just like that. It inspires me, it's an inspiration,” the retiree who declined to be named said of the sightings in Pereira's home.

A retired traveller from New York who only gave her initials as W.K. and had dropped by during her vacation here, told Malay Mail Online: “I feel privileged. I feel very honoured and totally amazed. This is a comfort and a blessing for the people to see this very special and rare event.”

Despite the regular flow of people dropping by to observe or pray, Pereira said her house is not a chapel and is merely a home where miracles have happened, also noting that the Catholic Church has yet to verify any of the sightings in her house.

She said that over 40 priests ― both those locally and abroad ― have visited to date, with some coming to check the sightings and others coming to pray.

Other reported sightings in Malaysia occurred in November 2012, where an image allegedly resembling the Virgin Mary was spotted on the glass panels of the Sime Darby Medical Centre in Subang Jaya, and in March 2015 where tears were allegedly seen on a Virgin Mary statue in the home of a Catholic believer in a village in Sabah.

On October 21, the local Catholic Church's news site for its community, Herald Malaysia Online, published an article by respected Catholic scholar Fr Johann G. Roten where the process and criteria for verifying alleged miracles was explained.

The four stated criteria ― approved in 1978 by the Catholic Church - are that the event must undoubtedly be “truly exceptional and beyond human explanation”; the message must be theologically acceptable, morally sound and error-free; the persons who claimed to have had the apparition would have to be of good character among other things; and the apparition must result in positive spiritual assets such as prayer and increase in charity.