KUALA LUMPUR, May 15 — A few groups of Malaysians have begun gathering supplies to help the thousands of refugees adrift out at sea, despite Putrajaya’s decision to turn away any seaworthy boat carrying the mostly Rohingya Muslims from Malaysia’s maritime border.

The groups have already mobilised collection of food items and medical supplies, and are now working on securing the necessary clearance from the authorities to deliver the aid.

“The problem now is if the ship is either in international waters or Thai waters, we do not know for certain,” social activist Azrul Mohd Khalib told Malay Mail Online when contacted today.

“If it’s international waters it would be easier for us to deliver supplies and all but if Thai waters, it would be more problematic,” he added.

Azrul said there are also plans to set up base in Langkawi, being the nearest point to reach the refugees, apart from using helicopters to airdrop medical supplies.

He added that MERCY Malaysia might launch an initiative to help deliver supplies as well, and urged any group planning to distribute aid to coordinate with them.

Other prominent social activists who have started to mobilise to help the refugees out include Datin Paduka Marina Mahathir, daughter of former prime minister Tun Dr Mahathir Mohamad.

She started a Facebook thread on her page this morning which has already  garnered over 1000 likes, 200 shares and lots of comments from Malaysians chipping in to help.

“Ok this is what I can think of right now to deal with this terrible humanitarian crisis out at sea. This is a temporary solution. The permanent solution needs to be dealt with at the government to government level. As chair of Asean, Malaysia needs to take the lead.

“Does anyone have seaworthy boats? Can we get food, water and other essential items plus medical personnel and send them out to the boats to help these people for now?

Anyone who wants to help, please step forward. Anyone who doesn’t, just keep quiet and step aside. Thanks,” her post on Facebook read. 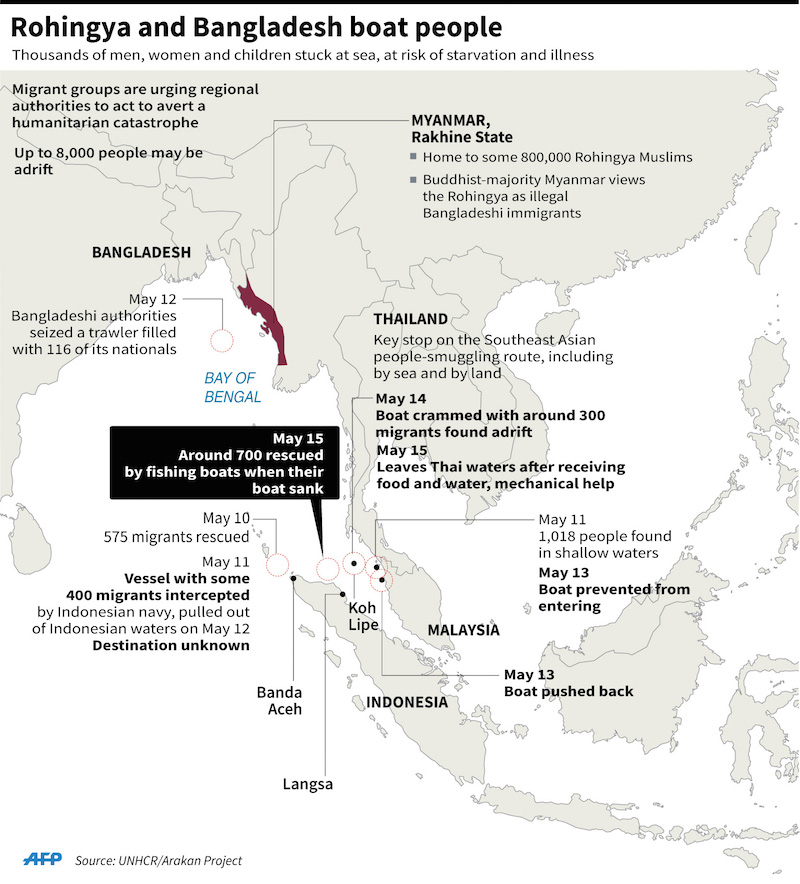 Marina also commented on the post said she needed “movers,shakers and doers” and tagged social activists Azrul and Syed Azmi Alhabshi to help with the crowdsourcing of goods and mobilising people.

Syed Azmi, known for his pet-a-dog session for Muslims which drew a slew of criticism, said he has decided on helping the migrants at sea no matter what.

However, he is currently trying to get the necessary permission as he doesn’t want to land into trouble again.

“We are going but I cannot tell you how it is going to be yet as we have only received a verbal green light. Once I have the paperwork necessary, I will let you know how but I can’t say anything for now as I don’t want to land myself and Malaysia in trouble,” he said.

Over the weekend, more than 1,000 Rohingyas and Bangladeshis were stranded on Langkawi, Kedah, apparently after human traffickers abandoned ship and left them alone.

The Malay Mail Online reported on Tuesday that the Home Ministry classified them as illegal immigrants, the 1,058 of them will be held at the Belantik detention centre in Kedah over the next one to three months before they are sent back to their home countries.

The United States last year downgraded Thailand and Malaysia to its list of the world’s worst centres of human trafficking, dumping them in the same category as North Korea and Syria.