KUALA LUMPUR, Nov 25 — Neighbouring Singapore is a key partner of the “5-Eyes” intelligence group which was revealed to have tapped telephones and monitored communications networks in Kuala Lumpur, according to more top secret documents leaked by intelligence whistleblower Edward Snowden.

In a report by Australian media group Fairfax Media today quoting Dutch daily NRC Handelsblad, it was revealed that Singapore is a key “third party” providing the ring — made of the United States, the United Kingdom, Canada, Australia, and New Zealand — access to Malaysia’s communications channel.

Singapore was included in a map published by NRC, which showed the US’ stranglehold on trans-Pacific communications channels through interception facilities on the US’ West coast, Hawaii and Guam.

The facilities, in turn, tap all cable traffic across the Pacific Ocean, and links between Australia and Japan.

In August, Fairfax had reported that the Singaporean intelligence is a partner of Australia’s electronic espionage agency, the Defence Signals Directorate, to tap the SEA-ME-WE-3 cable that runs from Japan, via Singapore, Djibouti, Suez and the Straits of Gibraltar to Northern Germany.

Singapore’s head of civil service Peter Ong, who had previously been in charge of national security and intelligence co-ordination in its prime minister’s office, is the government’s representative on the telco firm’s board.

It is believed that SingTel had been responsible in expanding the ties between Australia and Singapore’s intelligence and defence in the past 15 years, said the report.

According to Fairfax, Malaysia and Indonesia had been key targets for both Australian and Singaporean intelligence even since the 1970s, since most of its telecommunications and Internet traffic goes through the island city-state. 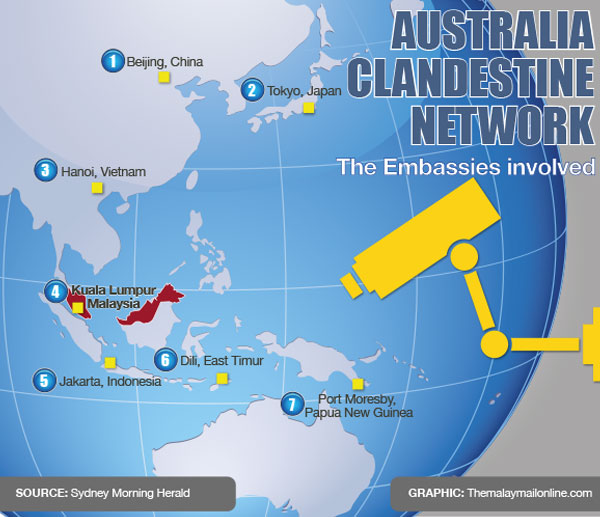 Last month, Snowden had revealed that the US runs a monitoring station in its Kuala Lumpur embassy to tap telephones and monitor communications networks.

A map originally published by Germany magazine Der Spiegel and sighted by Fairfax, showed 90 electronic surveillance facilities worldwide, including in US embassies in Jakarta, Bangkok, Phnom Penh, and Yangon.

Dated August 13, 2010, the map however did not show any such facilities in Singapore, Australia, New Zealand, Britain, and Japan, which are the US’ closest allies.

In August, Australian intelligence sources had confirmed that top-secret intelligence tool XKeyscore — which was revealed by on-the-run Snowden — has been used to spy on Malaysia among other Asia-Pacific countries.

The XKeyscore programme boasted that by 2008 over 300 terrorists had been captured from intelligence gathered by the tool.