Top secret exposé: US spying from its KL embassy 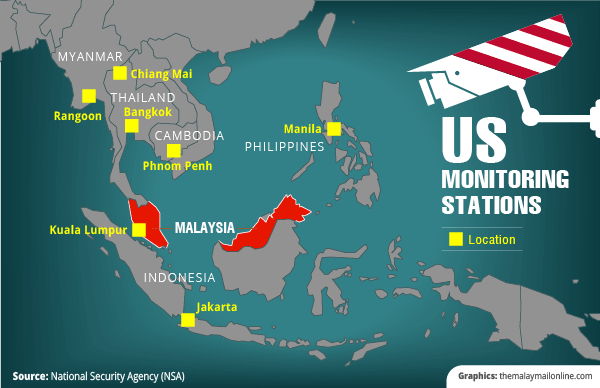 Dated August 13, 2010, the map however did not show any such facilities in Singapore, Australia, New Zealand, Britain, and Japan, which are the US’ closest allies.

At the time of writing, The Malay Mail Online could not reach the US Embassy for comments.

In August, Australian intelligence sources had confirmed that top secret intelligence tool XKeyscore — which was revealed by on-the-run Snowden — has been used to spy on Malaysia among other Asia-Pacific countries.

The admission followed a leaked slideshow published by the UK’s daily The Guardian revealing in detail the US National Security Agency (NSA) program, which the newspaper claimed collects “nearly everything a user does on the Internet”.

The top secret slideshow made in 2008 revealed that the Xkeyscore program allows analysts to search through extensive database of emails, search queries, social media, online chats, and browsing histories of millions of people with no need for prior authorisation.

It was released to the “FVEY” group, which included the US’ “5-eyes” intelligence partners — the US, UK, Australia, Canada, and New Zealand — said SMH.

SMH had previously named Australian signals intelligence facilities at Geraldton in Western Australia, Shoal Bay near Darwin, HMAS Harman near Canberra and the US-Australian Joint Defence Facility at Pine Gap near Alice Springs as contributors to the XKeyscore database.

According to Fairfax Media, Australian intelligence sources recently confirmed that Australia’s electronic espionage agency, the Defence Signals Directorate, is a “full partner” in the XKeyscore program.

The Xkeyscore program boasted that by 2008 over 300 terrorists had been captured from intelligence gathered by the tool.