The artists explained that the mural was still a work in progress when it featured three naked women. — Screengrabs from Facebook/Nor Zigan Zigan
Follow us on Instagram, subscribe to our Telegram channel and browser alerts for the latest news you need to know.
By TAN MEI ZI

PETALING JAYA, April 20 — A group of artists behind a mural in Jeram, Selangor have come forward to address concerns after a Facebook user shared pictures of the unfinished artwork.

The controversy surrounding the post quickly escalated as critics began hurling racist comments against the artists and accused them of disrespecting religion with their work.

In a series of Instagram stories, artist Lyana Leong said the anger over the mural stemmed from a misunderstanding.

She explained that the women in the mural were always meant to be clothed but that she drew them naked at first to get a better understanding of the proportion and scale of their bodies.

The clothing would then be painted on the women’s bodies at a later stage.

“While we were working on the mural, we used a black cloth so the public wouldn’t be able to see the women’s ‘aurat.’

“However, my friend Sliz and I wanted to see how the mural looked from afar and check if the faces or bodies had any imperfections.

“He removed the cloth so we could inspect the mural from afar and we covered it back up again afterwards,” Leong wrote on her Instagram Stories and tagged her fellow artists known as The Sliz and Bibichun. 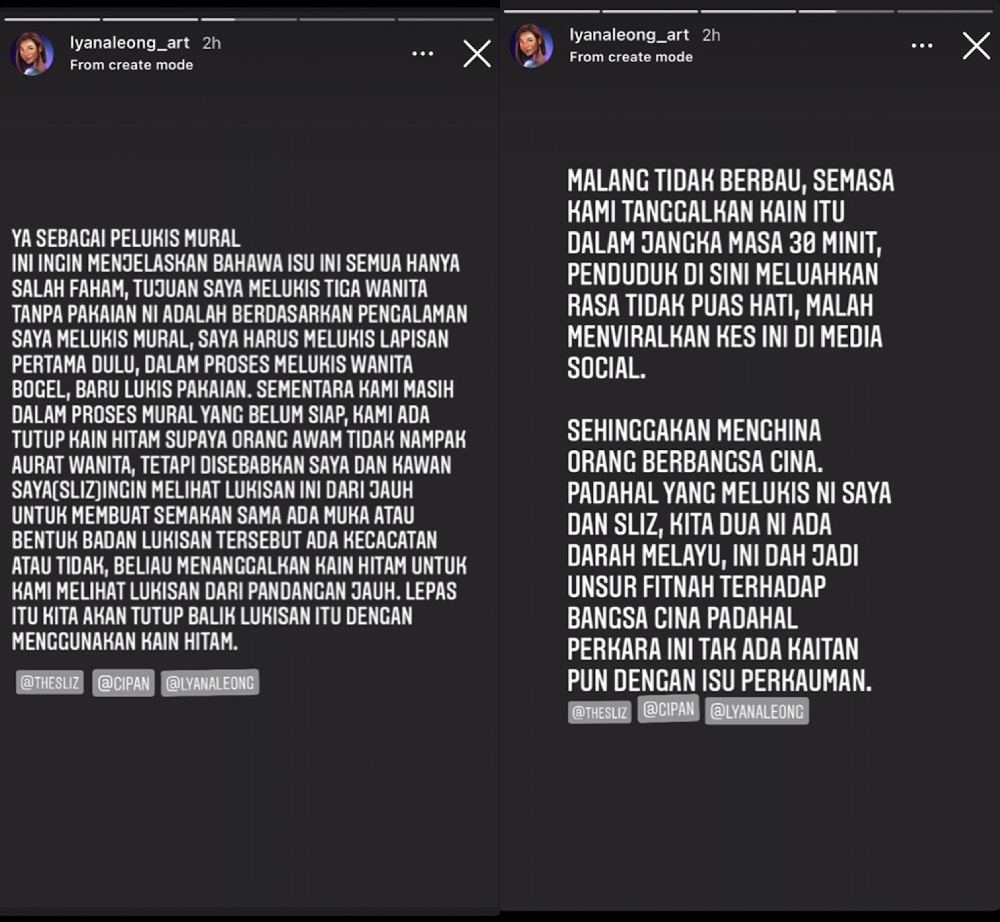 Leong pleaded with social media users to stop using the mural to bring up topics of race. — Screengrabs from Instagram/lyanaleong_art

Leong added that the photos taken by the angry Facebook user were probably snapped when Sliz temporarily removed the black cloth to check on the mural.

She emphasised that the viral photos of the naked women did not represent the final drawing and pleaded with social media users to stop racialising the issue.

Sliz also addressed the controversy on his Instagram Stories and wrote that the artists were paid a visit by the police this morning to discuss the mural.

They were also contacted by the city council and local politicians who received complaints about the artwork last night.

Sliz added that an “angry mob” of over 30 people had also gathered at the mural yesterday, an experience that left him feeling unsettled.

“But to summarise it all, it was a human mistake on my part.

“It’s completely understandable that people misunderstood the mural because (the women in it) WERE naked, but it’s part of a process and also training for (Leong),” wrote Sliz. Sliz said the matter has been settled after the artists clarified their intentions with the local authorities. — Screengrab from Instagram/thesliz

Sliz said that he created the initial design layout of the mural while Leong did most of the work on the figures.

He concluded by saying that they had received the blessings of the local council and that the police have even offered 24-hour protection so they can safely complete the mural.