Woodie Pie co-founder Heidi Tan (right) handles the jewellery-making while her sister Cassandra is in charge of marketing and business development. — Pictures by Ahmad Zamzahuri
Follow us on Instagram, subscribe to our Telegram channel and browser alerts for the latest news you need to know.
By TAN MEI ZI

PETALING JAYA, Jan 17— Malaysian jewellery maker Heidi Tan is all too familiar with the challenges of being a mother, particularly when it comes to breastfeeding.

When a man wrote to her requesting a custom order of jewellery made from his wife’s breast milk, a light bulb went off in her head.

The mother-of-two and her younger sister Cassandra then co-founded Woodie Pie in 2015 to sell handcrafted accessories made from breast milk.

They had previously worked together on a soapmaking business and have since delved into the world of DNA keepsakes.

The special bond that exists between a mother and her baby is something that the duo hope to immortalise by making such pieces.

“The breastfeeding journey isn’t easy. You will go through sore nipples, mastitis, and criticism and negative comments from family members or strangers.

“It’s a pain that only a breastfeeding mother knows.

“I think breast milk jewellery is a tiny reward and recognition for a mother when they go through this period,” Heidi told Malay Mail.

Woodie Pie has already catered to thousands of customers all over the globe, including ones from Malaysia, Singapore, Canada, Australia, Indonesia, and the Philippines.

Some of their customers have even shed happy tears after being surprised with a necklace or bracelet made from their own breast milk.

“Last year, a man contacted us asking us all about the process of posting breast milk to us and we thought it was a bit strange.

“Later, he explained that he was planning on ‘stealing’ his wife’s breast milk from their fridge and sending it to us so we could make a Valentine’s Day gift for her.

“When she received the gift, she was so surprised and cried because it was a lot more meaningful than getting a regular piece of jewellery,” said Cassandra. 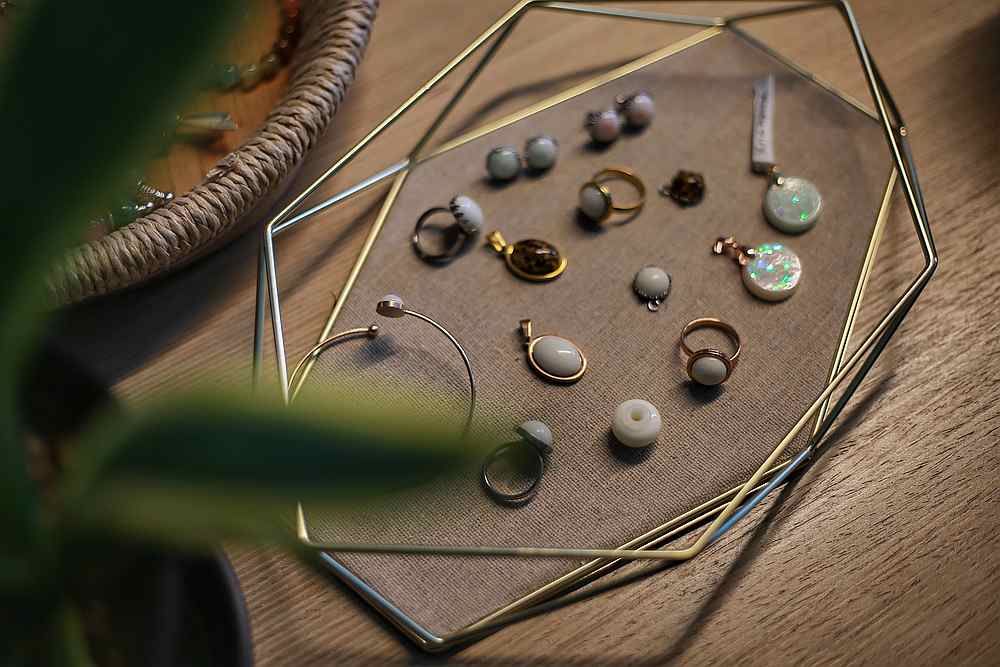 Aside from breast milk, Woodie Pie also offers accessories made from other DNA materials such as hair strands, umbilical cords, milk teeth, and even gallstones.

Heidi said the items can serve as a thoughtful reminder of a person’s past struggles, especially in the case of those made from gallstones.

“If you have a gallstone, I believe the pain is equivalent to the contractions a pregnant woman feels before her baby is born.

“Some doctors say gallstones are caused by oily food, so maybe a keepsake like this can serve as a reminder for that person to pursue a healthier lifestyle.”

A delicate hand and a sharp eye are needed if one wants to craft a high-quality breast milk stone.

When the Woodie Pie team receives a customer’s breast milk, it takes three days for Heidi to preserve and sterilise it before the jewellery-making process can begin.

The liquid is then combined with a solidifying agent and left to set for seven days, after which it is polished to perfection. 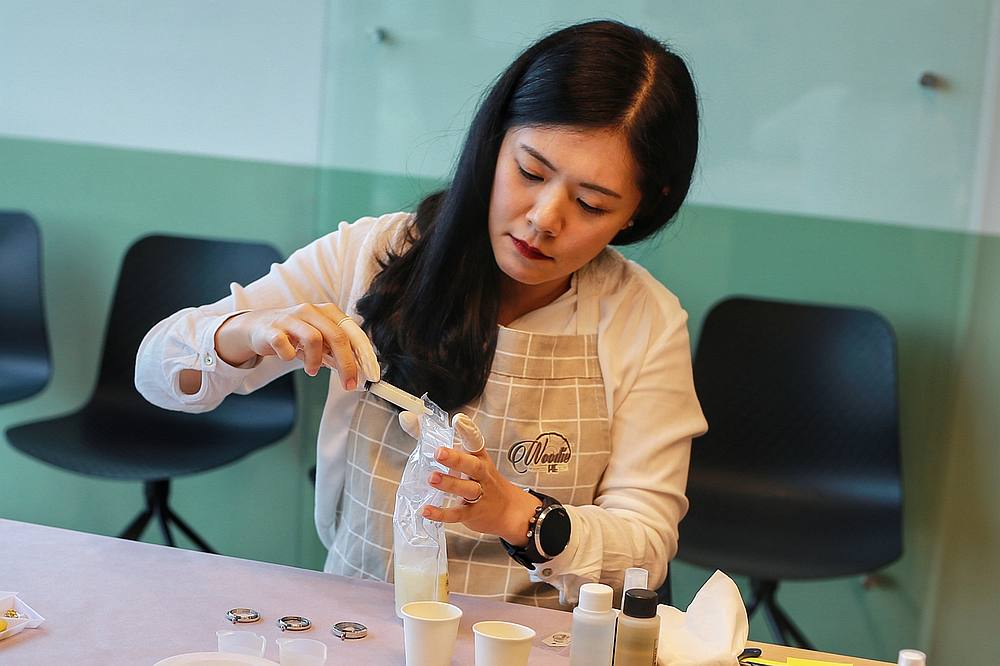 Heidi uses a syringe to extract the breast milk before heating it to get rid of air bubbles. — Picture by Ahmad Zamzahuri

The stone is then kept under observation in case any imperfections start to develop before it is shipped off to its recipient.

Heidi and Cassandra have also found solutions for mothers who cannot supply enough to meet the 5ml minimum requirement to make a single breast milk stone.

They can opt to make a smaller stone with additional chemicals added in to help the solidification process.

Describing every drop of breast milk “as precious as blood',' Cassandra said some mothers who cannot breastfeed their babies due to insufficient supply have ordered their jewellery as a way of making something meaningful out of their experience. 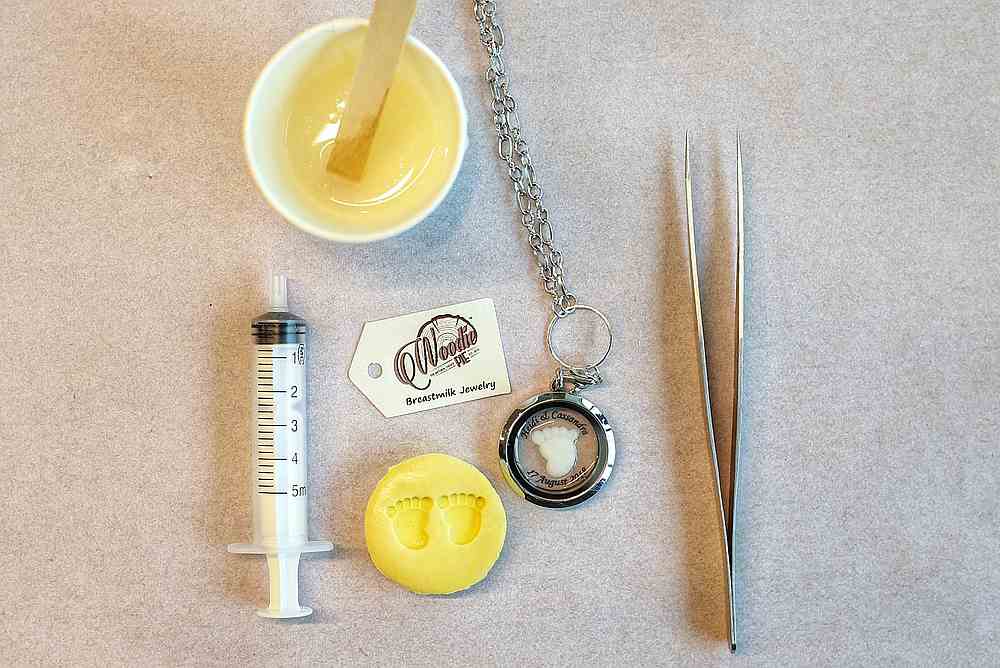 Some of the materials required to make a breast milk keepsake. — Picture by Ahmad Zamzahuri

She added that customers shouldn’t worry about their breast milk going bad during the shipment or jewellery-making process as it does not affect the final product.

“Leftover or spoiled breast milk doesn’t affect the result of the jewellery.

“We once made our product from breast milk that was eight years old.”

The weeks leading up to Valentine’s Day, Mother’s Day, and International Women’s Day are the busiest periods for the Woodie Pie team thanks to the feminine appeal of their items.

Timeless, understated designs such as a bracelet with a milk charm have won over the hearts of their customers and even snagged the Baby Talk PapaMama Reader’s Choice Award for “Best Breast Milk Jewellery and DNA Keepsake” this year.

To get a closer look at the breast milk jewellery from Woodie Pie, check out their website.