‘Creatures of Near Kingdoms’ was intended to be affordable and in soft cover — a book that could travel between spaces. — Picture by by Ham Abu Bakar
Follow us on Instagram, subscribe to our Telegram channel and browser alerts for the latest news you need to know.
By By Penelope Cannata

KUALA LUMPUR, Nov 14 — Zedeck Siew’s first book, Creatures of Near Kingdoms, may focus on the flora and fauna of an imaginary world, but some of it may seem familiar. And with good reason since Siew and fellow Malaysian, illustrator, Sharon Chin drew inspiration from their lives in Port Dickson.

“The book has 75 animals and plants that are imaginary, but native to South-east Asia.

“The thing about the stories is that they are not quite real. So, a lot of them are based on real things or actual folklore, but then they are taken to a different place, or put in a different context.”

The book, launched officially on Nov 10 at Kinokuniya, had been in the works since 2014, and Siew explained he had always had a clear idea of the kind of book he wanted to create.

“In role-playing games there are these things called monster manuals. They’re books full of creatures where you can pick up and put into the game.

“So, I wanted the book to function the same way, in that it’s a book full of animals that you can kind of imagine in your space.”

Although Maple Comics owners Amir Hafizi and Fairul Nizam originally thought the book would be nice as a coffee table book, Zedeck insisted on a different format.

“The fact that we wanted [the book] to be like this; to be softcover and really affordable, is so that it travels. It doesn’t stay on coffee tables.”

This imaginative quality of Zedeck’s work, along with his prose is what captured the attention of Amir and Fairul in the first instance.

“His writing has a feverish quality to it,” Amir says.

“It reminds me of certain sci-fi and fantasy themes from the 70s. So, it had that evergreen quality. And I think it pairs really well with the drawings and the artwork.” 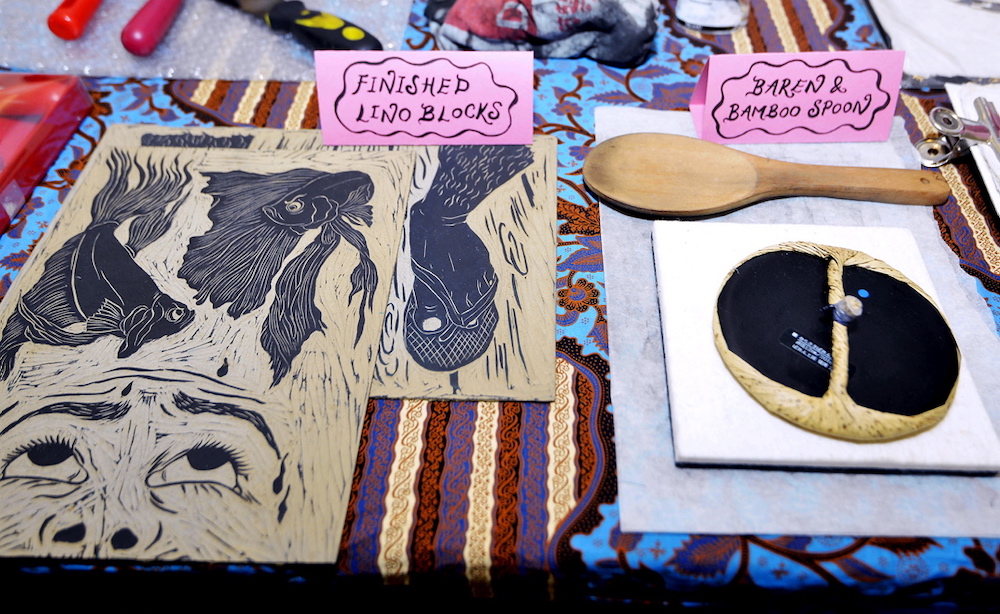 Sharon used the lino cutting technique to create the artwork for the animal stories. — Picture by by Ham Abu Bakar

The artwork, Chin explains, varies between the animal stories and the plant stories.

She used a lino-cutting technique to create the unique art for the animals; for the plant stories, she wanted to create patterns.

“My idea for the patterns was that, because plants are in the landscape, they are usually in the background.

“So, whenever you see animals, they are sort of the actors, and they’re moving in the front. They are the ones who make the action happen. But the plants, to me, they set the stage, they set the atmosphere,” she says.

Siew hopes to be able to re-publish the book in Malay.

Creatures of the Near Kingdom is available for purchase on the Maple Comics website.