KUALA LUMPUR, Feb 11 — Origami, the art of folding paper, is often misunderstood as just a craft for children or artistic adults.

At the Malaysia Origami Academy set up by Kenneth Ch’ng and his wife, Cherry Loh, they hope to educate others on the importance of origami. “It’s much more than just artwork. I like origami because of its technicality and its application,” said Kenneth, a trained electrical engineer who picked up origami from age 8. 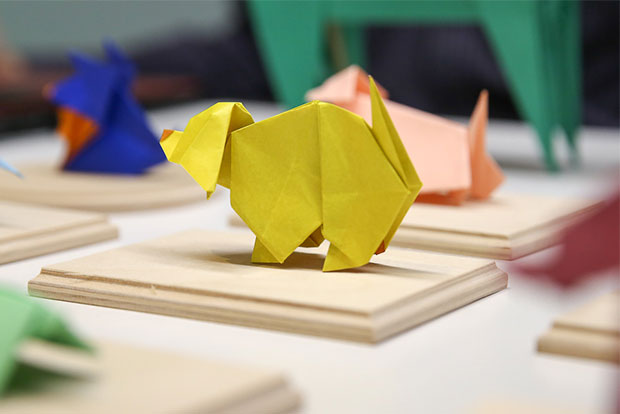 This origami Saint Bernard is designed by Edwin Corrie and folded by Kenneth Ch’ng.

As a curious child, Kenneth discovered a fascination for folding paper. His inquisitive mind started analysing each fold and how it could be made into various shapes. “I didn’t know at that time I was creating by folding and changing things,” he said.

Later, Kenneth found out that origami actually triggers off the right and left hemispheres of the brain, making it an excellent activity to develop skills. In fact, Kenneth tells us that, in Germany, they even use specific folding motions as an alternative physiotherapy for patients. 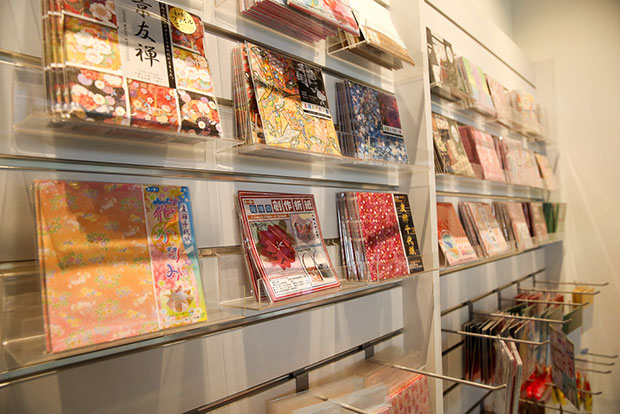 The academy carries a small range of imported origami papers.

“They tested that the folding sequence can trigger the social cognitive brain function,” he said. During his university days, he discovered how origami is used in science, where the folding patterns are used to develop solar panels, airbags, telescope lens and much more. 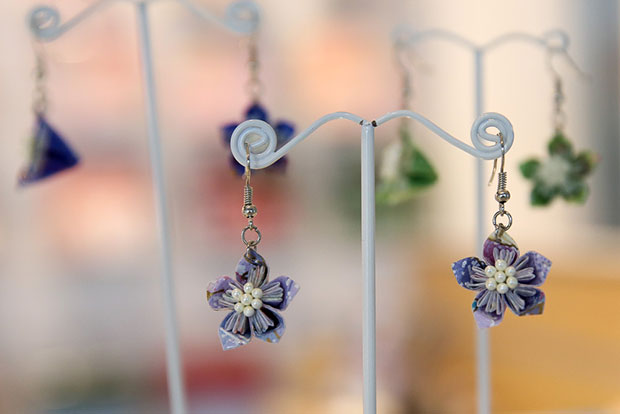 You can also purchase these handmade origami flower earrings with a water resistance coating.

In Japan where he was posted for work in a semi-conductor manufacturing company for eight  years, he recognised the potential in teaching origami. “I went into the science of origami,” he explained.

His lightbulb moment came after he had the opportunity to attend the Tokyo edition of Origami Science Mathematics Education. The conference held every few years explores the interaction of origami with mathematics, science and education. 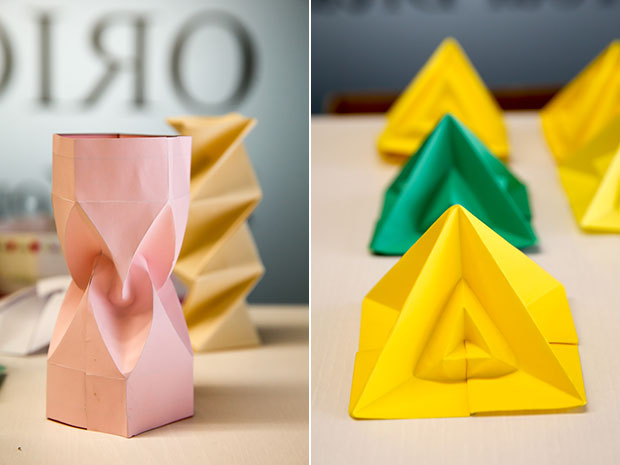 The David Huffman Tower is used to build drugs and nanorobots (left). The nested pyramid is a study of two dimensional patterns (right). 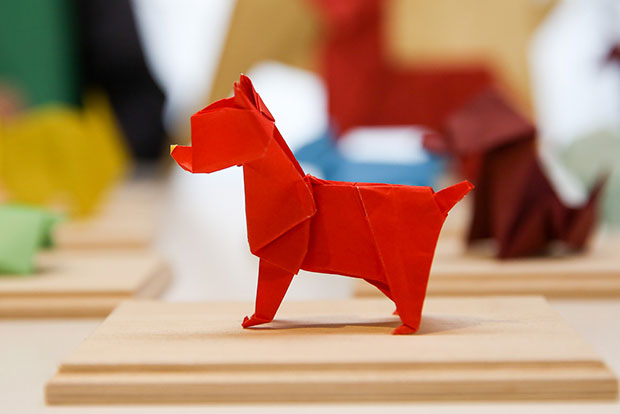 Details matter down to its paws with this bright red origami dog created by Juan Lopaz Figueroa and folded by Kenneth Ch’ng.

“Even if you buy a book, you may not know how to fold as the diagrams are hard to interpret,” With the emergence of YouTube, this has helped many to follow the folding sequence.

However, Kenneth believes that as all you do is follow rather than think about how each fold correlates to the other, that important thought process needed to trigger the brain is somewhat lost. 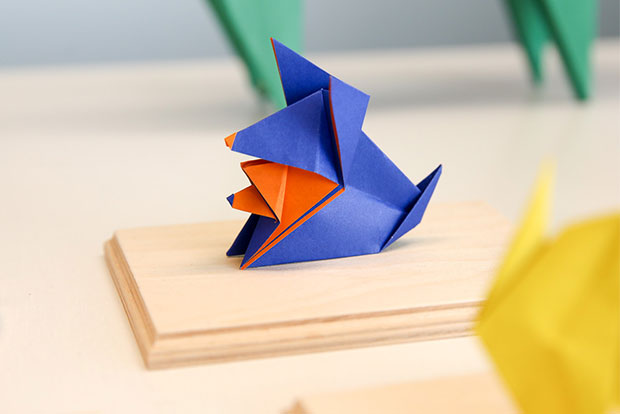 Do you see double with this origami dog from Makoto Yamaguchi that is folded by Kenneth Ch’ng?

His personal experience was when he was stuck folding a swan for close to one year. When he attended the symposium, he met the creator who showed him that elusive fold, hidden and untold in a diagram.

Kenneth relates to us that at the moment he was taught how to fold the swan, he could not hold back his tears of joy. This led him to realise how important teaching others is. He adds, “You go into teaching, you see the joy.” He decided to register Malaysia Origami Academy in 2004. 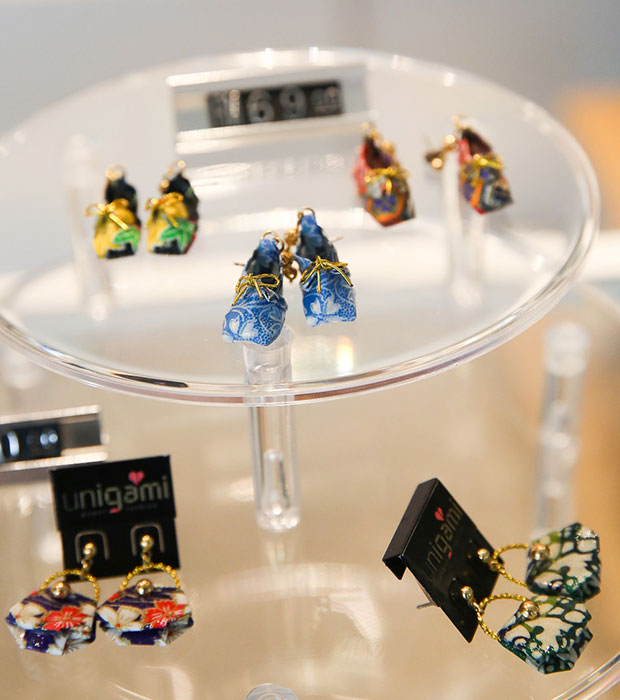 Dainty origami shoes and purses encrusted with Swarovski element crystals can be used as accessories.

After the Fukushima earthquake in 2011, he returned to Penang, his hometown. He decided to take the plunge and set up an origami studio, Cherry Art Studio.

Many people were sceptical about the viability of the business. In November 2014, at the Malaysia Folding Paper Exhibition where around 250 origami art pieces were on display and held at Penang SPICE arena, they recorded 30,000 visitors. Despite the high volume of visitors, only three people signed up for classes. That was when Kenneth realised for his long-term survival, he would need to move his studio to Kuala Lumpur. 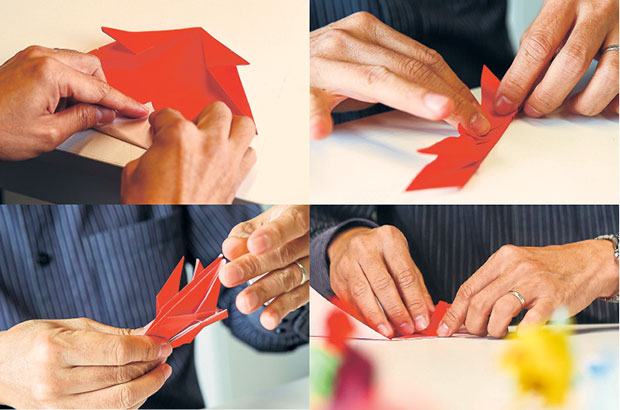 Folding origami triggers off the right and left brain hemispheres.

In 2017, he opened the academy in Publika. Soon, classes were filled up, usually by expatriates who are aware of the importance of origami. His classes are held in small groups of eight to ensure that they are supervised properly.

The academy also provides origami skill level certification. “We are teaching in the classes the know-how and why you do it,” he said. In addition, Kenneth also teaches external classes in One Academy. 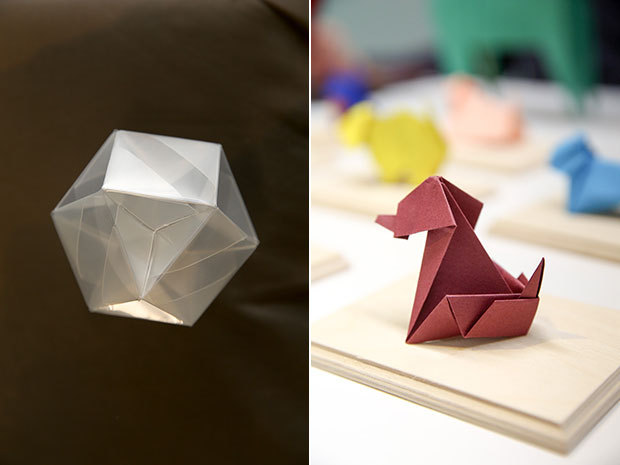 Origami has found its way into science like this hemi cuboctahedron that shows an interlocking design (left). Wag goes the tail for this origami dog designed by Yasuhiro Sano which is folded by Kenneth Ch’ng (right).

Moving forward, he plans to open up an origami gallery. Since the industry is relatively new here, he believes education and awareness is still needed. Since the registration of the academy back in 2004, he has conducted around 1,500 talks and lectures about origami. They also provide design services for exhibitions and workshops.

One important aspect that Kenneth is spreading about origami is legality issues. He explains that the industry is a spider’s web of patents and trademarks for every folding action or even creation made. “Almost 99.9 per cent are patented,” he said. 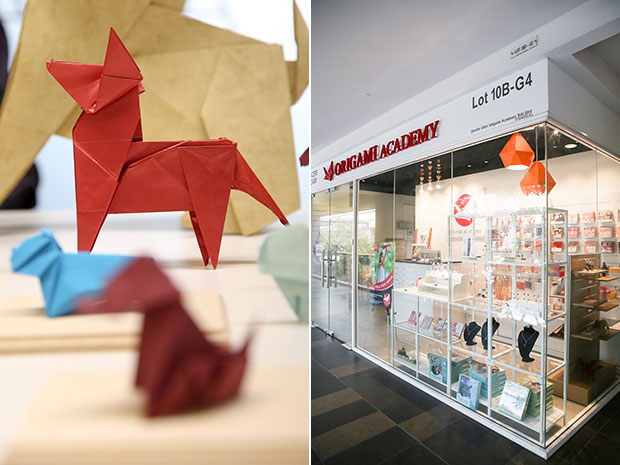 Barking crazy with this origami dog designed by Makoto Yamaguchi that is folded by Kenneth Ch’ng (left). The academy is located in Publika (right).

We may think nothing of following a diagram online and folding say a flower and posting it on social media, until a letter from a lawyer arrives, citing copyright infringement. Kenneth tells us the proper procedure is one must ask the creator for permission before you use it.

“You can fold origami for your own pleasure but not for commercial use,” he explained. With the advent of social media, it’s also not as simple, since one image can lead to a patent dispute, so Kenneth advises that it’s imperative you credit the creator and the folder, or you will be sued. 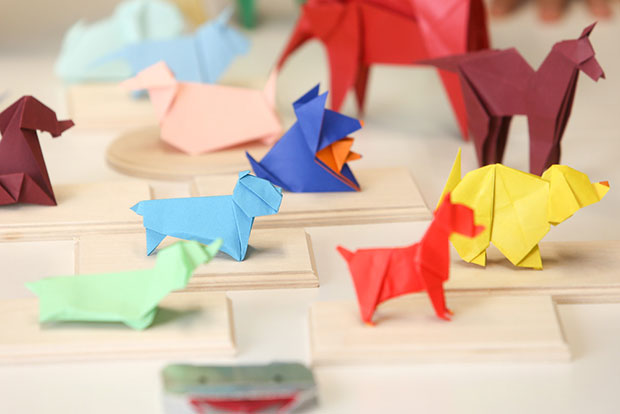 Unlike Japan, where origami has been adopted as part of their culture, origami is not widely recognised here. “It’s a headache as it’s an emerging and new industry here,” he said. Other countries are already offering origami as part of their education curriculum, like Israel. Even universities are offering courses for origami engineering, he advises.

For origami enthusiasts, the next part would be poi, which uses tethered weights that are swung in a variety of movements to create the rhythmical and geometric patterns. As it is affected by gravity, you are constantly creating various patterns that can be used, making it incredibly versatile.

For this year’s festivities, it’s time to fold an origami dog. According to Kenneth, the animal together with the cat and flowers, are one of the most popular origami shapes. Most times, it’s just identified by numbers, rather than the various dog breeds.

One of the hardest dogs to fold is the labrador by Satoshi Kamiya. As its body is hollow, it has many layers but what makes it incredibly beautiful is the facial expression of the dog. “It looks simple after you fold it, it is so difficult. Vice versa, if something looks hard to fold, often looks simple,” said Kenneth.

As diagrams may not show all the steps, Kenneth recommends that you follow the YouTube video links to fold the dog. Just remember to credit the creator in any images you share.

For intermediate levels, watch the video in this link: https://www.youtube.com/watch?v=v6mbDf9j54Q

For experienced levels, watch the video in this link by Seth Friedman: https://www.youtube.com/watch?v=atASww-Sl1M