MELAKA, Feb 11 — Jonker Street (or its official name, Jalan Hang Jebat) is indisputably the focus of everything touristy in Melaka. Sure, the historical heart of Malaysia has other heritage attractions, such as the Stadhuys and clock tower in the Red Square or the emblem of the town, the ruins of the A Famosa fortress. But by sheer throngs of visitors, Jonker Street has every other place beat.

Away from the shops selling antiques, souvenirs and more chicken rice balls than you’d imagine possible in a single street, however, is one of my places in Melaka: Jalan Tokong. 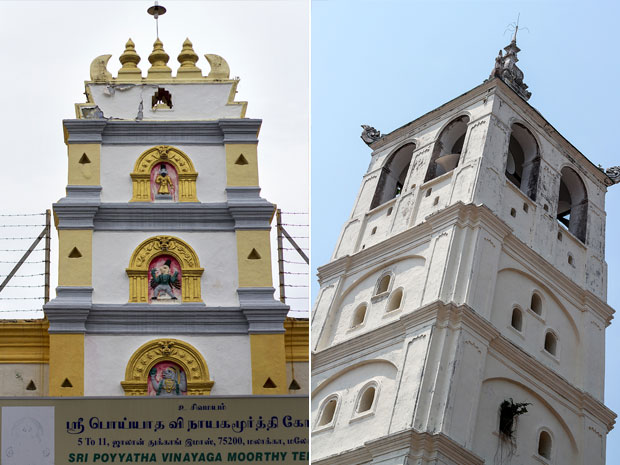 The gate-pyramid or gopura of the Sri Poyatha Moorthi Temple (left). The white pagoda-like minaret of the Kampung Kling Mosque (right)

Running parallel to Jonker Street, Jalan Tokong (Malay for “Temple Street”) has a more relaxed atmosphere. Even the noisy troops regurgitated from smoke-belching tour buses that wander here from Jonker Street lower their volume (or as much as they could), out of a sense of wonder and respect.

For where else in Melaka (or Malaysia, or the world, for that matter) could you find three different houses of worship coexisting in religious harmony? And it has been this way not for a smattering of years or a few decades but centuries. 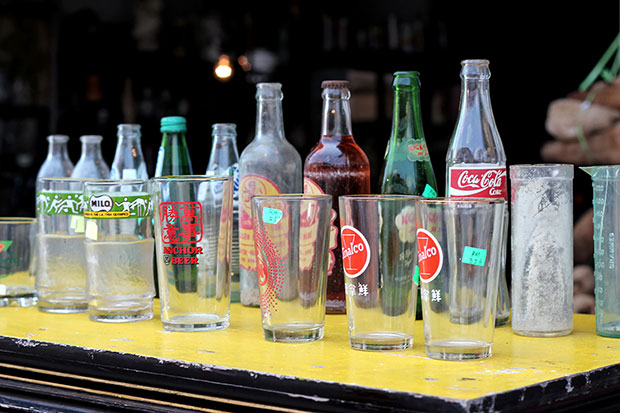 If you stand on either end of Jalan Tokong (its official name is Jalan Tukang Emas), you can see all three structures, one after the next, stretching into the distance: the gate-pyramid or gopura of the Sri Poyatha Moorthi Temple; the white pagoda-like minaret of the Kampung Kling Mosque, tipped in green; the dramatic flag masts of the Cheng Hoon Teng Temple, soaring towards heaven.

No wonder Jalan Tokong has earned its moniker of Harmony Street. 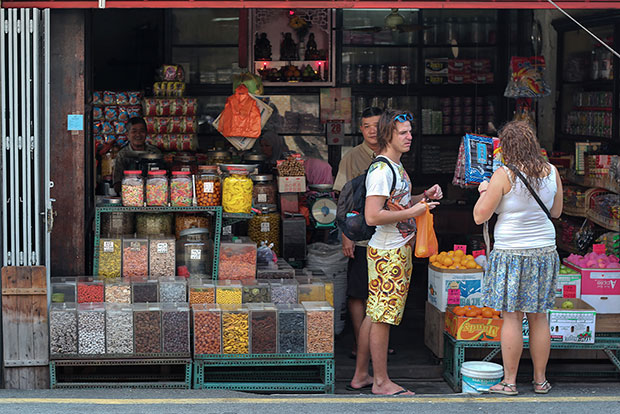 We begin our explorations with the Sri Poyatha Moorthi Temple. Not only is it the oldest Hindu temple in Malaysia, it is also one of the few remaining Chitty temples left in the country. The Chitty community, also known as Indian Peranakans, first settled in Melaka during the Sultanate period as traders from Panai in Tamil Nadu. It was one of the community’s leaders, Thavinayagar Chitty, who first built the temple in 1781 on a plot of land given by the Dutch colonial rulers of that era. 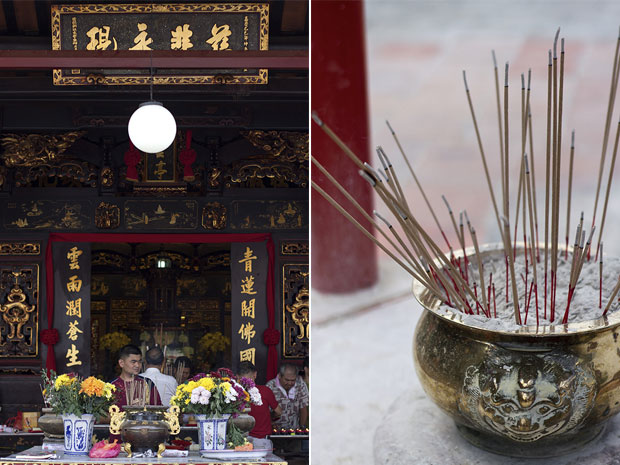 Growing up in Melaka, I just took for granted, as my school friends did, that there were many different communities — one friend was a Baba, another a Eurasian (more specifically, Kristang or Portuguese Melakan), yet another a Chitty. Only after I moved to Kuala Lumpur for work, did I realise what a rich cultural heritage this is — such a diversity of races, religions and customs!

Playing tour guide to my friends (some visiting from overseas, others simply from other states; all enamoured of my hometown’s history and stories), I would tell them that the temple is dedicated to Ganesha, the Hindu god with the head of an elephant. I tell them he’s known as the Lord of Obstacles, that he removes obstacles in the path of worshippers. My friends often nod happily, possibly imagining a colleague at work receiving a sudden transfer to Timbuktu. 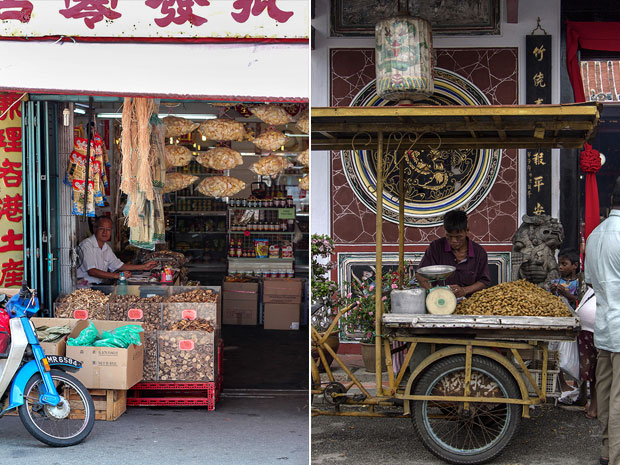 Further down the street is a mosque quite unlike any other most of my visiting friends have seen before. The Kampung Kling Mosque is painted as white as snow, with rooftop tiles green as jade. The current brick building was constructed in 1872. However, an earlier structure, made from wood, was originally built in 1748 by Indian Muslim traders who resided in a village called Kampung Kling (hence the name of the mosque).

With a spectrum of architectural influences, both Asian — Chinese, Hindu and Sumatran — and European, such as the Victorian chandelier and Corinthian columns, the Kampung Kling Mosque stands as the ultimate showcase of how Melaka is a treasured melting pot of cultures. 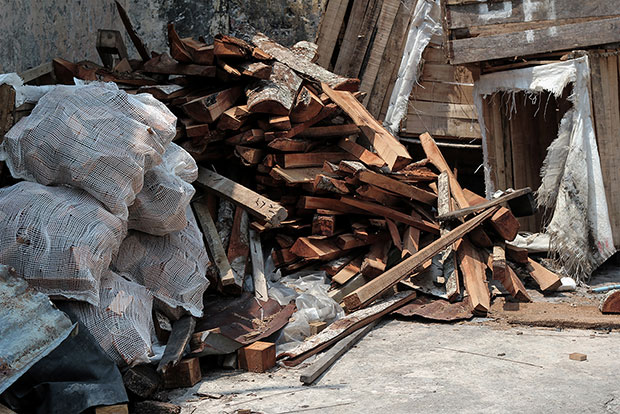 Back lanes are filled with second-hand wood and other detritus

Moving on, we pass traditional Chinese shophouses supplying afterlife necessities such as incense, Hell banknotes, and even paper versions of iPads and BMWs. Most of their customers buy these for ancestor worship at the nearby Cheng Hoon Teng Temple.

First commissioned by Tay Kie Ki (a.k.a. Tay Hong Yong), a kapitan (captain or leader) of Melakan’s Chinese community in 1645, the temple is a centre of the teachings that represent the pillars of Chinese life of that time: the Three Doctrinal Systems of Confucianism, Taoism and Buddhism. 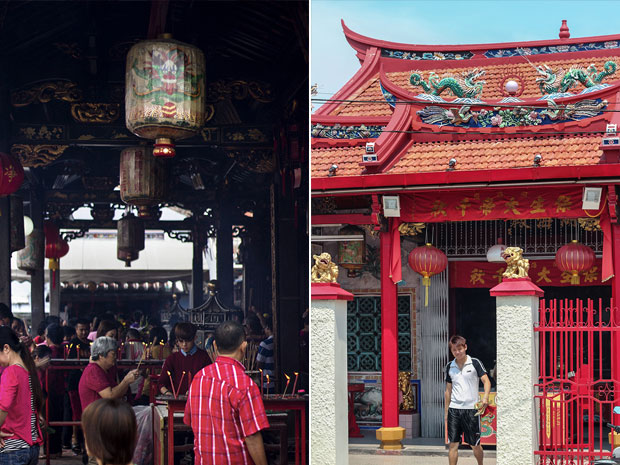 Today, the temple (which is also known Guan Yin Teng as it is dedicated to Guan Yin, the Goddess of Mercy) sees devotees flocking to it during festival days to offer prayers. Pots of incense ash and joss sticks are everywhere. The beautiful South Chinese architecture are courtesy of migrant artisans from provinces in China’s south, such as Guandong and Fujian. Every aspect is aligned with feng shui.

Opposite Cheng Hoon Teng is another temple, albeit one that follows Mahayana Buddhism. The Xiang Lin Si Temple, named after a monk from China, started as a kampung-style wooden house in 1958 before being rebuilt as a double-storey brick building in 1985. Its relatively modern architecture stands in contrast with the others along Jalan Tokong. 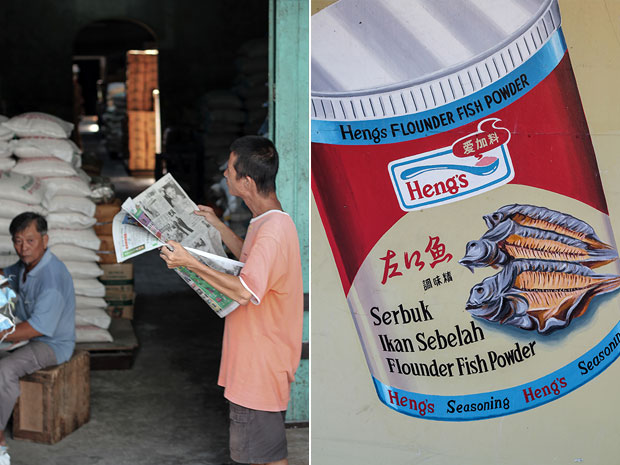 Catching up on the news (left). Murals of yesteryear icons such as a can of flounder fish powder (right)

Other signs of street life abound, here and in the surrounding lanes. A kacang putih vendor plies his trade. Back lanes are filled with second-hand wood and other detritus. Murals of yesteryear icons (cans of flounder fish powder, anyone?) are freshly painted on weather-worn walls.

Red lanterns hang between shophouses. Some of these are content to remain kedai runcit (sundry shops) or warehouses, selling dried mushrooms and fish maw or storing sacks of rice. Others try their luck with tourists, setting up tables with retro memorabilia such as soft drink glass bottles from another time.

There is a sense of real life here along Temple Street, with its places of worship and its ordinary residents going about their daily routines. There is harmony here, and peace, and prosperity.