PETALING JAYA, April 22 – It's 5am. Your tummy is rumbling for food. Most people would be in bed but there are those who are just finishing their midnight shift.

Others may be starting their early morning shift. Or they may not have even slept the whole night.

Everyone's got their own story but one thing is certain, the stomach needs to be fed.

Looking for a bowl of hot noodles to satisfy your hunger in the early morning hours sounds like an impossible task. Hence I was grateful to discover this particular stall.

It's run by a woman who is carrying on her late father's legacy to serve up a flavourful bowl of curry noodles. Also known as 4am wantan mee, she had to switch to opening from 5am with the operating restrictions during the pandemic. Till today, she has stuck to that opening time.

This stall was started back in 1971, where it operated in front of the market. Their regulars were the market stall holders who would fill up their tummies with the noodles before they started serving customers.

Throughout the years, the stall moved around the Sea Park area. Eventually they ended up at this corner coffee shop. You will be surprised but at 5.30am, there are customers slurping down the curry mee at the almost empty coffee shop

By the time I got there by 5.30am, I was surprised to see a table full of customers. Apparently this stall is frequented by university students.

I decided to try a bowl of curry wantan mee there. The plan was to take away the rest so I can sample the other items.

Initially I was worried that the curry would be too heavy for such an early meal. Surprisingly it wasn't. The curry was fragrant with lemongrass but still light on the stomach. I found myself slurping down the thin egg noodles which were nice and springy.

Equally enjoyable was the topping of minced pork. This item is featured in all their noodles, which adds a homestyle element.

The mince was well prepared with a fluffy texture. Personally I find minced pork to be more enjoyable with curry compared to say char siu or siew yoke. That pairing with wantan mee is also an old school one, which very few stalls do in the Klang Valley.

The beancurd puffs had absorbed the delicious curry broth hence each bite of that was slowly relished. Stir in their spicy, fragrant sambal to add a chilli kick if you wish. Expect to fork out RM7.50 for a small portion of the noodles. For their big portion, it's RM8.50. You can also take away the curry mee, just heat up the fragrant curry and rejuvenate the bowl of noodles

Later in the morning, I sampled the other items after heating up the broths. I enjoyed the dry curry noodles immensely. It's essentially wantan mee with the same toppings as the curry mee.

The difference is the curry broth, which you add to the noodles. The curry plus the sweet savoury seasoning for the noodles is pure magic with its creaminess and as a tinge of sweetness. 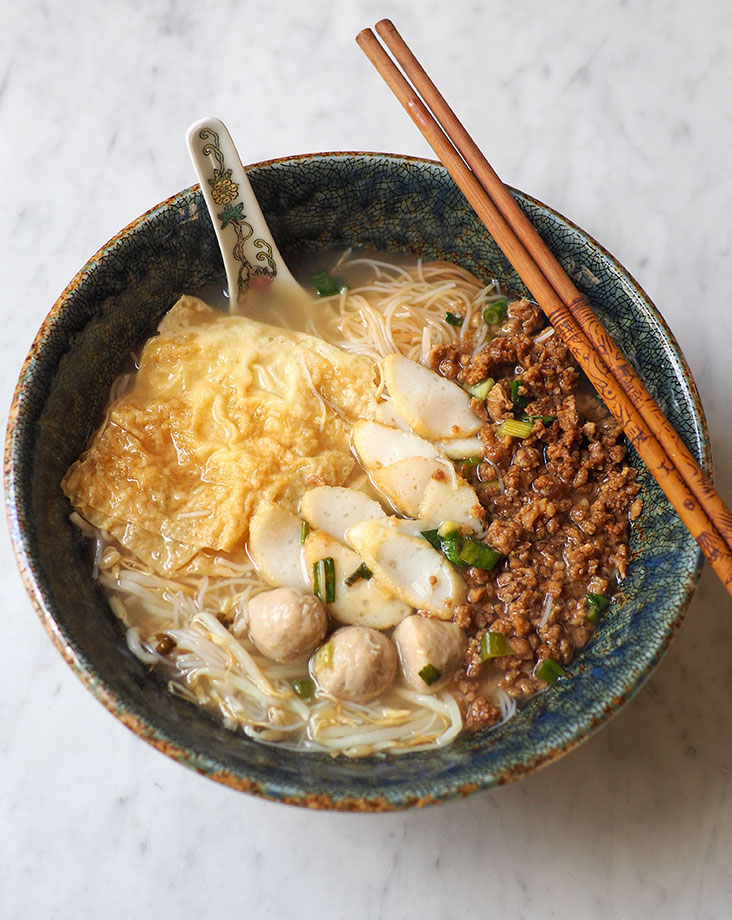 If your tummy prefers a lighter taste in the morning, there's also a clear soup option with a choice of your noodles that is served with the minced pork, fish cake slices, pork balls and 'fuchuk'

If you prefer, there's also the clear soup option. The soup noodles are comforting with the light, clear broth. For the soup version, you get an extra piece of fuchuk. This round, I paired it with vermicelli noodles.

For the dry version, this was wantan mee on its own which was enjoyable too. The small portion of noodles is RM7 while the big portion is RM7.50

The dry 'wantan mee' is also a good option just on its own; its deliciousness lies in that minced pork and the sweetish sauce

From what I read, the wantan mee tends to run out first. If you're not fussed, you can opt for other types of noodles.

The owner told me she has cut back on business as she also juggles looking after her 80-plus mother after her father died. Some days, she will close by 9am, so it's best to get here early to avoid disappointment.

Just note also that the days off are not fixed. It's best to follow their Facebook to get updates. They tend to update quite late though. I wasn't able to get to try the noodles on my first attempt as they closed earlier... it was the fifteenth day of the lunar month.