BANGKOK, Sept 30 — When one is still at home most of the time, as I am, finding new ways to cook can be a matter of rejoicing or despair. There is only that much food delivery and takeaway anyone can endure, and I’m not up for dining out regularly quite just yet, so it’s to the kitchen then.

There are many pantry staples but none, at least to me, are as versatile as the humble egg.

Now I’m also missing travelling, particularly one of my favourite cities in the world: Bangkok. Given these conditions, why not marry both conundrums and make the best of things?

Make lemonade with lemons, they say. Well, why not make omelettes (and more) with all the eggs you have?

If all my trips to The Land of Smiles in the past have taught me anything, it’s that Thais know how to take an ordinary egg and make it extraordinary.

Take the Thai style omelette or khai jiao. When ordering this at a proper Thai restaurant, you are guaranteed of extra crispy edges; its centre is almost custardy whilst remaining light and fluffy.

You can taste the generous splash of nam pla (fish sauce), some acidity from fresh lime juice, and some body from a dollop of cornstarch gruel. Drizzled with spicy chilli sauce and served piping hot, there’s nothing quite like your first bite of khai jiao.

Of course, as with everything else in life, you can always jazz it up a little. One popular rendition is the khai jiao pu, where chunks of fresh crabmeat are added to the omelette. If this sounds sumptuous, then it might come as no surprise that prominent khai jiao pu chef Jay Fai, has seen her crabmeat omelette stall awarded a Michelin star.

Beyond crab meat, there are myriad other variations on the basic Thai omelette. Stuffed omelettes or khai yat sai is typically filled with ingredients such as minced pork, spring onions and tomatoes. The tangy kang cha-om khai is a traditional soup made with acacia leaf omelette and cowslip creeper.

One Thai omelette that will look familiar to fans of our Malaysian orh chien is hoy tod; both are oyster omelettes. The Thai take, however, can also be made with mussels, and tends to be crispier. 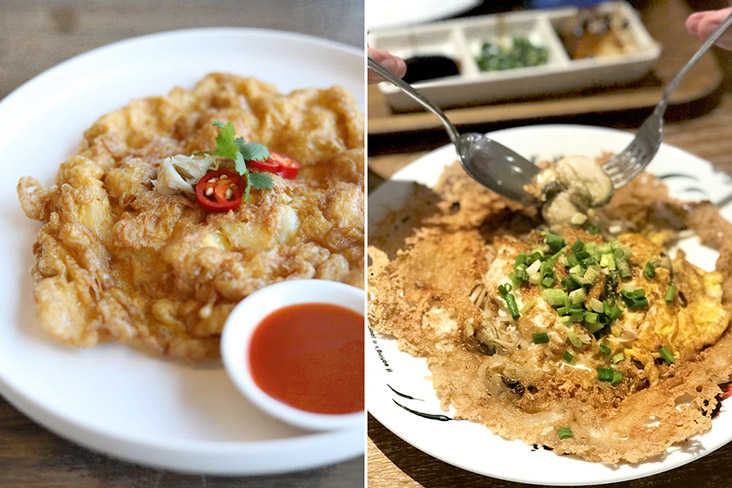 Thai omelettes can be stuffed in the form of 'khai yat sai' (left) or mixed with oysters as 'hoy tod' (right).

Whether it’s plump oysters or magnificent mussels that go into your hoy tod, one thing is for sure: there will be plenty of bean sprouts for a refreshing crunch. A generous topping of chopped spring onions, and you’ll have the perfect hawker snack.

You might be wondering why some of the “omelettes” in Thailand are riddled with holes. These aren’t omelettes but hor khai or Thai egg net threads.

Hor khai is generally used to hold other foods, be it a platter of appetisers such as prawn cakes and crab meat spring rolls, or as a wrap for stuffed sweet peppers. The latter is known as prik yuak sot sai, one of the accompaniments for khao chae (“rice soaked in flower-scented water”). 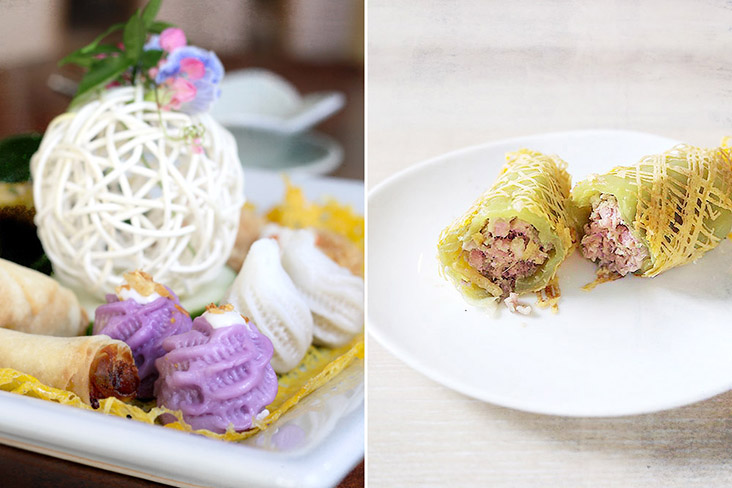 'Hor khai' (Thai egg net threads) is used to hold other foods, such as appetisers (left) or as a wrap for stuffed sweet peppers (right).

To create this delicate egg lace with its distinctive cross-hatch appearance, beaten eggs are drizzled over hot oil in a wok. Back and forth in alternating, opposite directions to create a lattice-like pattern.

A more specific variation of hor khai is known as foi thong. Reminiscent of the Portuguese fios de ovos, the sweet foi thong is made by drizzling the beaten egg, not over hot oil, but boiling syrup. The resultant threads are even finer, which is why foi thong is also called golden egg yolk threads. A lot of that notoriety has got to do with a widely shared story about how a redoubtable woman, disgusted with how her son-in-law treated her daughter, decided to teach him a lesson. The fine lady served the rake a dish of deep-fried eggs, telling him that if he didn’t mend his ways, it’ll be his family jewels that will go into the wok next!

Sweet, salty, sour and spicy, and as pungent as you can bear — it’s the entire Thai flavour spectrum in a single dish!

Just like Malaysia, Thailand has found many uses for preserved eggs, in particular the salted egg or khai kaem. From a moreish plate of fuk-tong pad khai or stir-fried pumpkin with salted egg and crab meat to a familiar dish of salted egg squid, somewhat drier than our version but just as tasty, khai kaem can be very addictive. 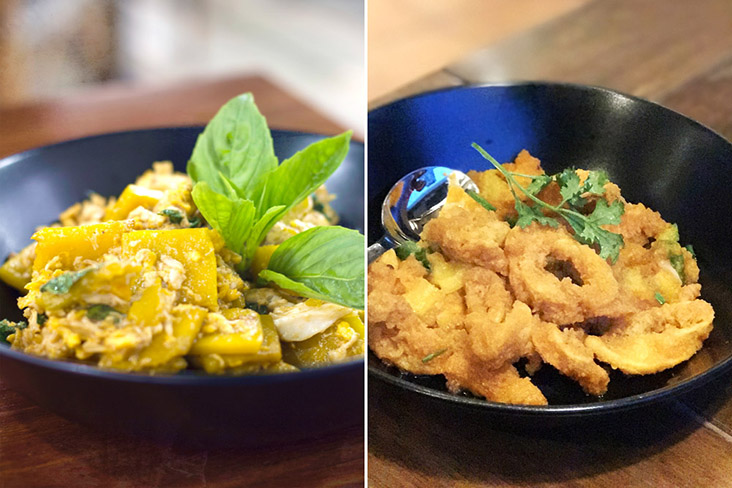 But salted eggs aren’t only meant for savoury dishes, at least not in Thailand.

To end your meal with a sweet finish, there is an abundance of khanom wan or Thai desserts to relish. If the restaurant has bua loy khai kaem wan on its menu, make sure to order it.

These warm glutinous rice flour dumplings are salty-sweet and swim in a bath of rich coconut cream. But what deepens the draw of this simple dessert is the requisite addition of a single salted egg yolk to make it even more luxurious. 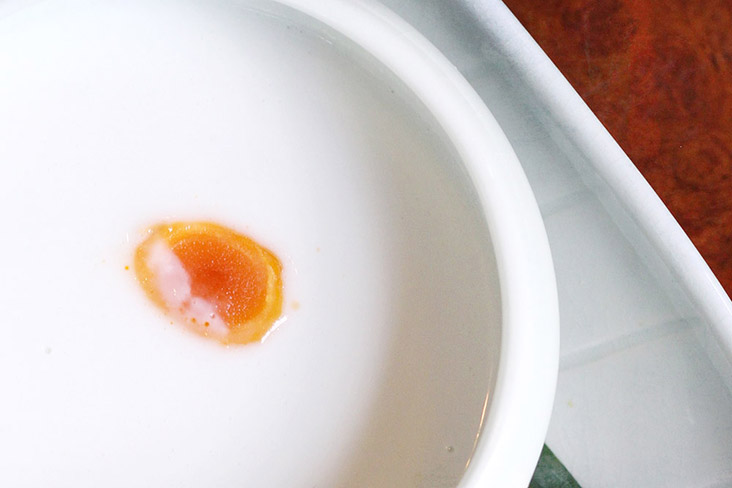 But sometimes we just desire the simplest of fare. When I first visited Bangkok, I often asked for khai dao when I really meant khai jiao, the Thai style omelette that we began this “egg-sploration” with.

Yet I was never disappointed with my mispronounced order; more often than not, I was delighted.

Khai dao means a basic fried egg in Thai though in Thailand, something so simple can be amazing. As with a khai jiao, the wok must be nearly smoking and the cook will ladle the hot oil over the egg to ensure the edges crisp up beautifully. 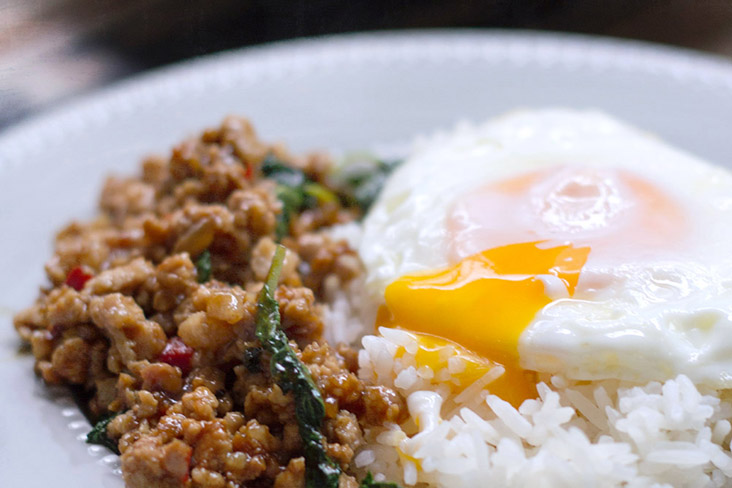 Served over a plate of white steamed rice, as you would with a side of krapao moo (holy basil stir fry with pork) or atop a plate of crab meat fried rice, it’s the pièce de résistance.

Oozing orange yolk, tender whites and the crunch of the golden lace, it’s the perfect egg, really. Wouldn’t you agree?