Fast and furious no more? Bangkok’s infamous No.8 bus

Japan in a salad bowl — try this wasabi prawn salad at home!

KUALA LUMPUR, March 20 — I miss Japan. The Land of the Rising Sun has captured my heart with the generosity of its people and culture, the beauty of its landscapes — both natural and man-made, and the diverse flavours of its cuisine.

Alas, I won’t be making a trip back any time soon but one ingredient that always reminds me of Japan is the delicate yet pungent wasabi. After all, one will be hard-pressed to find a single sushi bar or Japanese family restaurant around the world without this signature green condiment.

Of course, most wasabi that we encounter isn’t real wasabi but a mixture of horseradish, mustard and green food colouring. The reason for this is simply the scarcity of real wasabi. Native to Japan, the plant is challenging to cultivate and mostly grows in flowing stream beds in mountainous river valleys.

Cultivated mainly in the Izu peninsula and the Nagano and Iwate prefectures, wasabi is also grown outside Japan — as nearby as Taiwan and as far away as the UK — with some degree of success. 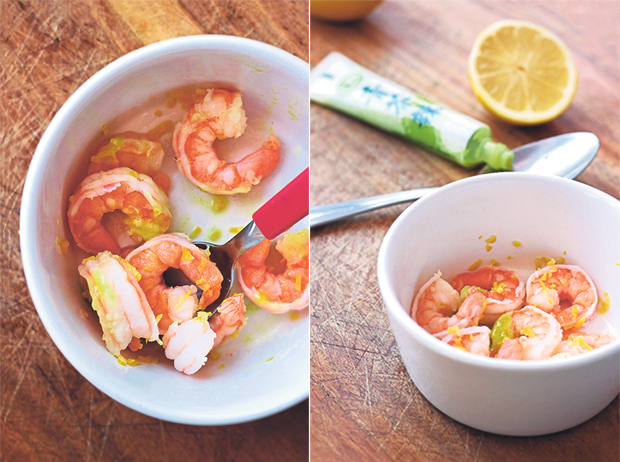 Remove the shells after the prawns have been cooked to keep the shellfish moist (left). Commercially available seiyo wasabi (“western wasabi”) is made from horseradish, mustard and green food colouring (right)

But the root remains a luxury. I’ve only tasted it in fine Japanese restaurants such as those in Kyoto serving traditional kaiseki-ryori cuisine where the knobbly root is grated by hand using a metal oroshigane grater.

Fortunately I’m no true food connoisseur (read: not a food snob), so the more common and mass produced seiyo wasabi (“western wasabi”) makes me happy enough. I know it’s really horseradish but even my Japanese friends are more than fine with this, so who am I to argue?

Another benefit of not hankering after the “real deal” is that it’s much easier to recreate a slice of my much-missed Japan at home with this green-paste-in-a-tube. It’s readily available at most supermarkets (you don’t even need to track down a Japanese specialty grocer). Here I combine wasabi with some ebi (prawns) in a refreshing salad that will delight given the current heatwave in Malaysia.

This is really a very simple salad, quick and easy enough to prepare even on a busy day. You do have to make sure you don’t overcook the prawns though. The trick is to cook them in their shells, removing the shells only after they have been cooked. To save some time, you can prepare the prawns ahead of time, then keep them in a covered container in the fridge till needed. Lemons — both the juice and zest — add a brightness to the salad (left). Any mixed green salad leaves will do; just make sure they are properly drained after washing (right)

Variations on this recipe are nearly unlimited; just substitute another spice or flavour bomb for the wasabi. Turmeric would work well if you toast the powder before adding to the prawns, or grating it finely if you’re using fresh turmeric root. Some kimchi “juice” — the liquid from your container of kimchi in the fridge — can be lovely but you may need to increase the honey to two tablespoons to balance out the acidity.

(After all, it could be India or Korea that you’re missing. Go for it.)

Whether you use wasabi or another ingredient to give the prawns a kick, be judicious with the amount. Better to under-season, which you can correct accordingly, than over-season in which case you risk overwhelming the tender, fragile shellfish.

6-8 prawns (depending on size)

Juice and zest from 2 lemons

Salt and pepper to taste

A handful of toasted almond flakes

Boil the prawns in some lightly salted water. Remove and set aside when cooked. After cooling for 5-10 minutes, remove the prawn shells. 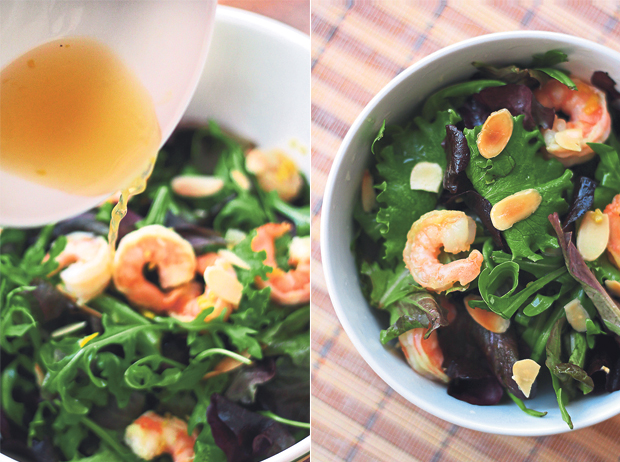 Add the honey, sesame oil and lemon juice to the salad before tossing (left). Almond flakes add a nice crunch to this salad (right)

Using a microplane, zest the two lemons and add the zest to the cooked prawns. Cut the lemons into halves, juice them and set the juice aside. Add the wasabi to the prawns and lemon zest. Mix well.

Add honey and sesame oil to the lemon juice and combine to make the dressing. Season with salt and pepper. Mix the wasabi prawns with the washed and drained salad leaves. Pour the dressing over the prawn salad and toss. Garnish with toasted almond flakes just before serving.

Serves two as an appetiser or side dish. Alternatively this will work as a light main dish for one.