Rainbow-hued 'nuudles' — freshly made vegetable noodles by Ah Ma’s Secret. — Pictures courtesy of Ah Ma’s Secret
Follow us on Instagram, subscribe to our Telegram channel and browser alerts for the latest news you need to know.
By Kenny Mah IPOH, Sept 13 – Rainbow-hued and springy. Thick and thin, curly and flat. These freshly made noodles are a feast for the taste buds and the eyes.

Nutritionists might rejoice too, these "nuudles” by Ah Ma’s Secret are made with vegetables too. Surely noodles can’t get any healthier than this?

Ah Ma’s Secret is headed by Chong Yoke Kong, 46, who is the youngest son of the noodle company’s founder, Madam Chin Choon Thai. Since he inherited the business from his mother, he has been actively expanding it for a new generation of noodle lovers. 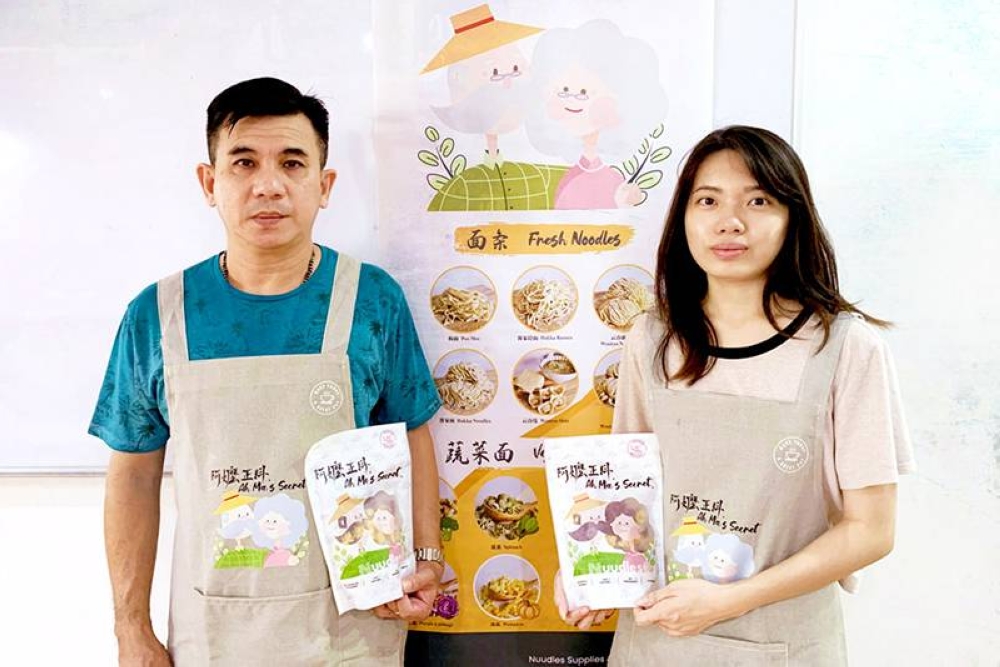 He proudly shares, "I’m the second generation of my family to make noodles. I have been helping my mother since a young age. These days I focus more on offline distribution.”

That distinction is crucial as Ah Ma’s Secret has since moved into the online space thanks to Chong’s niece, Stephanie Hor, 25. The architecture graduate says, "I completed my degree when the pandemic hit and found it hard to get a job as the whole industry was affected.”

The family business thus became a lifeline to Hor as she began helping out her uncle by establishing an online presence for Ah Ma’s Secret. What was traditionally brick-and-mortar is now able to further its reach to new market segments via social media.

One major selling point, Hor soon realised, is the story behind Ah Ma’s Secret and not just how their vegetable-based noodles are a healthier alternative.

She shares, "When our founder first began making these traditional homemade noodles in the early 1980s, she made it for her loved ones in Ipoh.”

It was later that the matriarch discovered she could earn a decent living for her family by selling her noodles, which she called "dāo má chet” in Hakka.

The name comes from the big knife that the Hakkas call "dāo má”; this was used to cut dough into strips. "Chet” (or qiè in Mandarin) simply means "cut.”

Chong explains, "These noodles were later called pan mee after they were brought to KL. They can come in a variety of shapes and thicknesses. My mother’s dāo má chet became popular enough that she could establish a manufacturing plant.”

When the business was passed down to him, Chong continued to innovate by developing new products. To stand out from other commercial noodle producers, he renamed the business as Ah Ma’s Secret (or Ā Mà Zhèng Liaò in Mandarin).

The rebranding, Chong hoped, would signify the authenticity of their traditional noodle making method based on his mother’s secret recipe. But even the best traditions need some updates to keep up with changing tastes and customer demands.

He says, "We only had fresh noodles such as pan mee and wonton noodles when we first started. Our noodles are all freshly made and non-dried. A typical recipe would require more food grade kansui (lye water) to extend the shelf life of the noodles. However our noodles consist of less kansui to ensure the noodles are chewy enough.” Freshly made wonton 'nuudles' in varying thickness and lengths.

To further differentiate themselves from their competitors, Ah Ma’s Secret now also makes vegetable noodles or nuudles (yet another attempt at rebranding, this time targeting health conscious millennials). Ah Ma’s Secret even has 'pan mee' made with vegetable purée.

Hor enthuses, "The ingredients for our nuudles are very simple - only vegetable purée and flour. These are salt, sugar, additive and preservative free. This is because we want the nuudles to be as natural as possible for everyone.”

To reach out to new market segments, Ah Ma’s Secret has been participating in weekend bazaars and markets. Hor says, "We started running stalls at such events recently to increase our brand exposure.”

But just getting out there isn’t enough as Hor soon discovered. She recalls, "When we first launched the brand online, plain fresh noodles did not seem attractive enough to the netizens. So we decided to make our vegetable noodles – something that is fun and yet nutritious to draw the attention of parents with kids and health conscious people.”

The result is a plethora of nuudles made with spinach, carrots and pumpkin. An explosion of antioxidant-rich red-purples from sweet potatoes, beetroot and purple cabbage. Ah Ma’s Secret even makes pasta-shaped nuudles, such as shell, sakura and spiral versions that cater to those wishing to add a bit of colour and nutrients to their favourite pasta dishes. Perhaps the best way to acknowledge and celebrate Ah Ma’s original secret recipe is to enjoy a bowl of her dāo má chet (or pan mee, as us KL-ites call these noodles), only more colourful and healthier now with a verdant, Popeye-approved tinge of spinach.