Kaobahn: Thai flavours of a home away from home

BANGKOK, Sept 23 — My favourite Thai dish is pad krapao, a quick stir-fry of minced pork with Thai holy basil and chillies served with hot steamed jasmine rice. It’s so popular you can find ready-to-go versions from convenience stores and cooked to order at many roadside stalls.

Easily available, yes, yet so many don’t taste quite right. Too salty, too sweet. Not spicy enough, not aromatic enough. So when we found a place that made it just right, every time, we knew we had struck gold.

Kaobahn, which literally means “food from home”, was started two years ago by 38-year-old Prame Srirungthum. We first came across Kaobahn’s home-cooked delights at Some Time Blue, a café along the same soi run by his younger sister Sutida, the National Thailand Brewer’s Cup 2016 Champion. 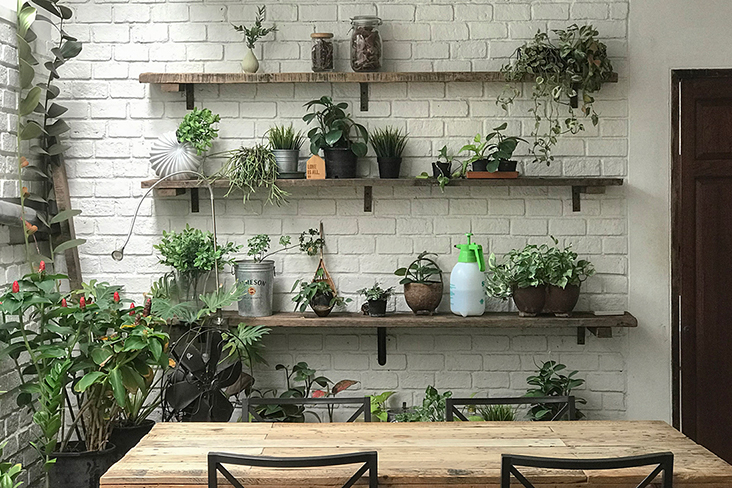 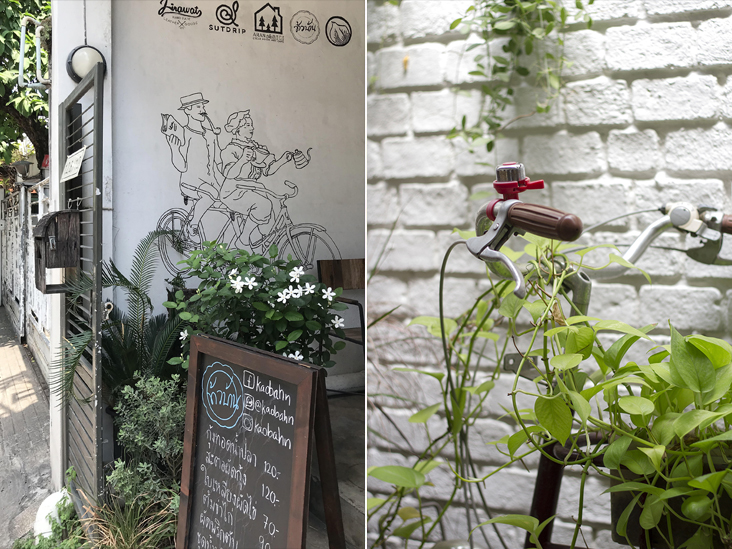 Enter Kaobahn and enjoy “food from home” (left). Even the bicycle feels at home, allowing creepers to adorn it! (right)

We wanted some food to go with her award-winning coffee, and she called for delivery from nearby Kaobahn.

One taste was all it took to get us hooked.

Her elder brother, who also runs a cyber security consulting firm, recalls, “My mum would always cook and bring food to Some Time Blue as a lunch box. So we start to share our lunch boxes with everyone there. All our friends liked her food and asked us to open a restaurant.”

Entering Kaobahn is, appropriately enough, more like entering a home rather than a restaurant. The sunny interior — thanks to a skylight — is decorated like an indoor garden with plenty of lush greenery. Even the bicycle feels at home, allowing creepers to adorn it!

They say to ready your stomach for a good meal, you should start with a hot soup. At Kaobahn, we gleefully prepare with their tom yum goong nam sai, a clear broth version of the classic hot and sour Thai soup, chockful of seafood. Equally comforting is their tom kha gai (chicken coconut soup), the acidity of the lime juice giving the creamy coconut milk a refreshing note. 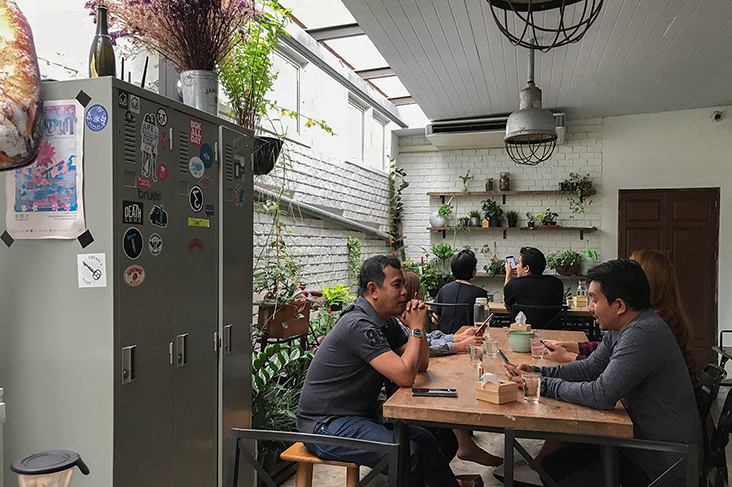 Patrons are mostly Thai, a good sign the restaurant has the approval of locals 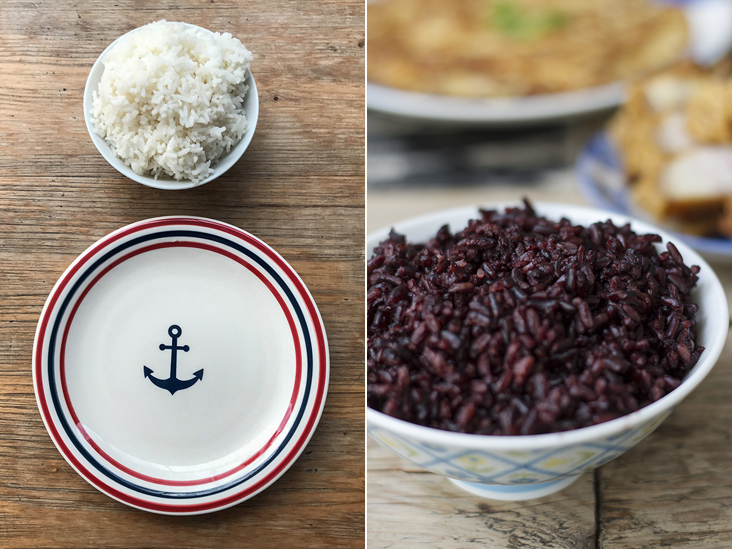 No Thai meal would be complete without a bowl of fluffy jasmine rice or kao (left). For more bite, try the kao niow dahm, a long grain glutinous rice purplish black in colour (right)

Thai curries tend to be of the green or red persuasion. The yellow curry, gaaeng leuuang saai buaa, from southern Thailand is not as common, which is a pity. Fresh turmeric gives the curry its brilliant yellow — the ochre-tinged lotus stems a signature feature — while tamarind offers sour to go with its heat.

Might this be too spicy for some? Srirungthum notes that their flavours are influenced by Thai-Chinese cuisine and lean towards spicy. He says, “Customers drop by Kaobahn tend to be busy working people living in the city who miss home-cooked food, the way their mothers would make it.”

It’s easy to see what draws them here. For meat lovers, the moo grob (crispy pork) has a very addictive “you can’t stop at one pop” quality. Kaobahn’s peek gai tod gluea (fried chicken wings) uses mid-joint wings instead of drumettes so they’re succulent rather than dry; they taste good even without the accompanying sriracha sauce. 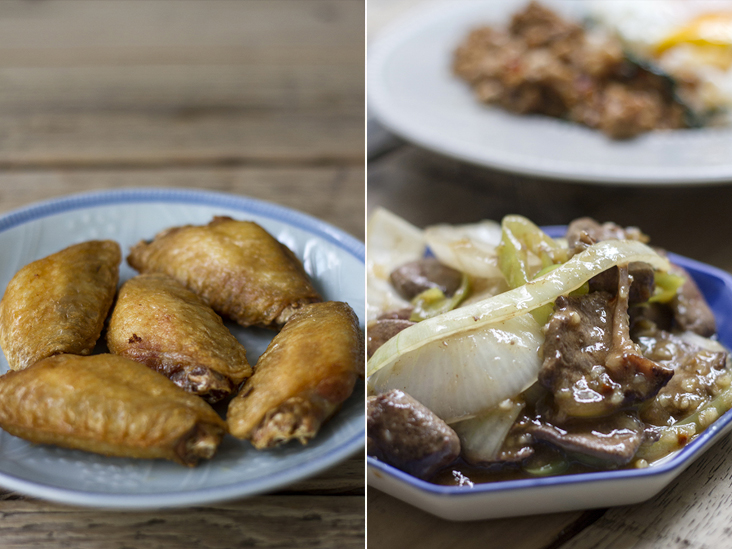 The garlic theme continues with pla muek tod krathiam, albeit levelled up a hundredfold with the crunchy aromatic bits smothering the bouncy squid. If you don’t fancy so much fried garlic (but why wouldn’t you?), the humk pad kai kem glazes the stir-fried squid with salted egg yolk for a silky finish.

If this sounds like one dish too many, fret not. According to Srirungthum, Kaobahn’s dishes are served in small portions so customers can order a variety: “Mum goes shopping for the ingredients at the local market. She chooses what goes on the menu so there are daily specials on top of the standard items.” 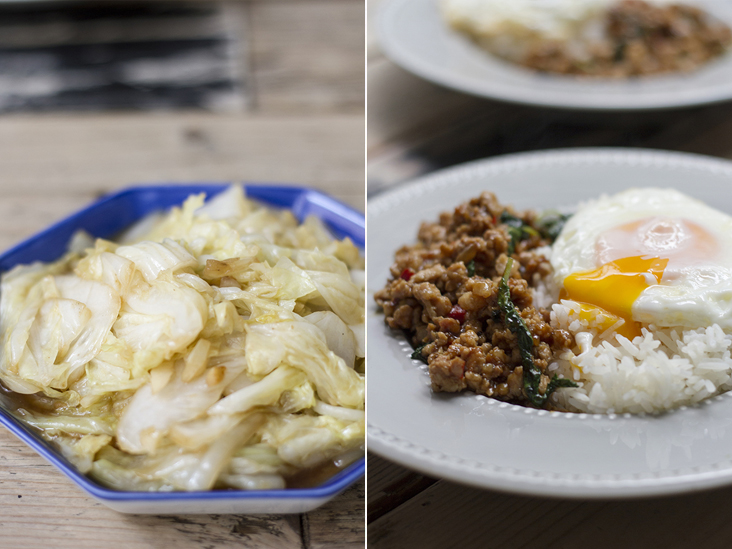 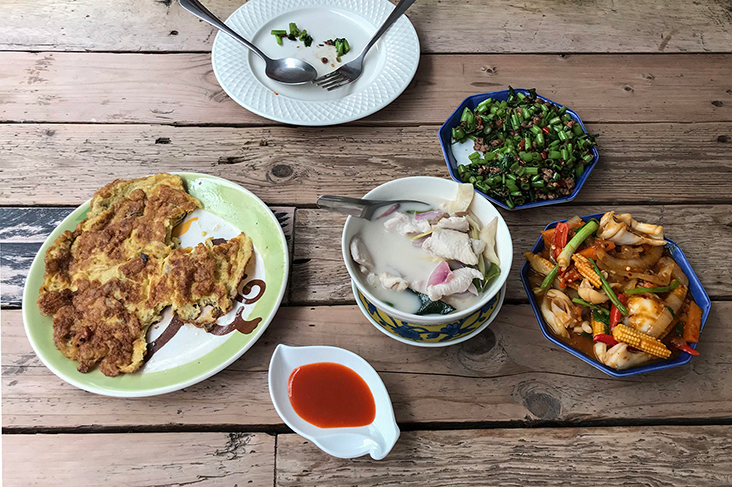 Taking up the challenge, we try four to five new dishes every time we dine here. Larger groups order even more and it can be educational to observe Thai culture at the dining table. Traditional etiquette means the youngest will serve the others who are more senior. It’s heart-warming.

No Thai meal would be complete without a bowl of fluffy jasmine rice or kao. Those looking for more of a bite can try the kao niow dahm, a long grain glutinous rice. Purplish black in colour, it is chewier than normal rice but not as sticky as glutinous rice. Its hue alone could whet your appetite.

The best part of every meal, for many, is the egg dish, and there’s nothing quite like a Thai-style omelette or khai jiao. Crisped up edges adorning layers upon layers of custard within, go for broke by asking for one studded with naman moo (crispy pork lard); you won’t regret it. 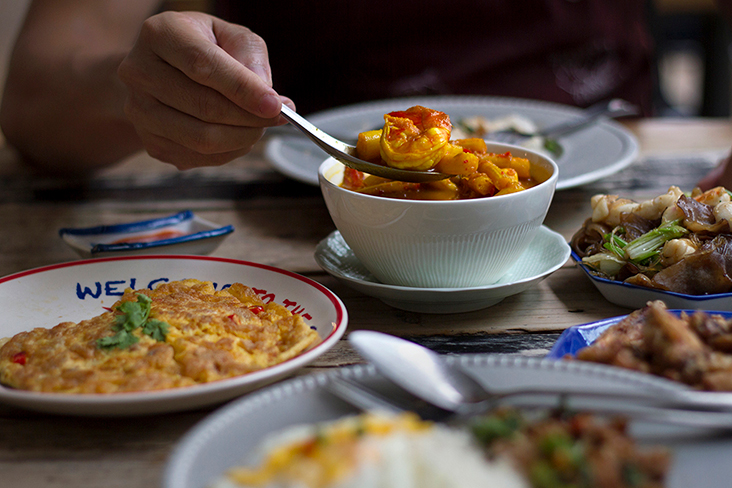 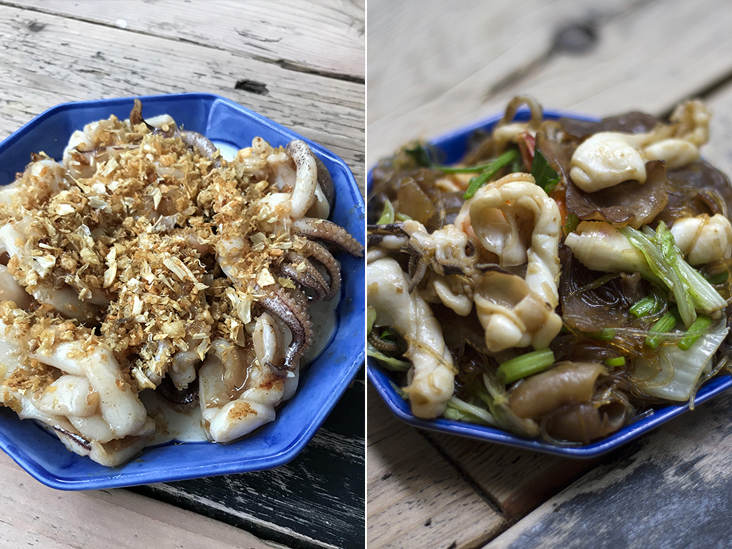 Or go even more basic: a single perfectly fried egg (khai dao), its runny centre waiting to be pierced and to spill, atop my aforementioned favourite pad krapao. Pad krapao is the quintessential Thai one-meal dish, beloved of children across the country, and once you’ve had it, it’s easy to understand why.

At Kaobahn, the pad krapao tastes like your childhood, even if you’ve never had this as a kid: it tastes of home, of a mother’s cooking.