JANUARY 17 — Puchong MP Gobind Singh Deo has questioned whether both the Malaysian Anti-Corruption Commission (MACC) and the Securities Commission of Malaysia (SC) can effectively carry out probes or investigations against each other, especially since they involve complaints against top-ranking officials.

On January 5, MACC chief commissioner Tan Sri Azam Baki in a news conference admitted that he had allowed his brother Nasir Baki to use his share trading account to buy the shares in two public-listed companies in 2015.

The Securities Commission (SC) later announced that Azam would be called in for questioning over alleged violation of stock trading laws.

On January 10, it was also reported that MACC was also looking into complaints against SC board members over misconduct among themselves.

Gobind has raised the possibility of conflict of interest, saying it could cast doubt on the investigations’ impartiality. He is rightly concerned Azam remains in office and section 5 of the MACC Act 2009 states that the head of the MACC is responsible for the direction, control and supervision of all matters relating to the commission.

More so when three senior officers have issued a statement offering their full support to their chief. 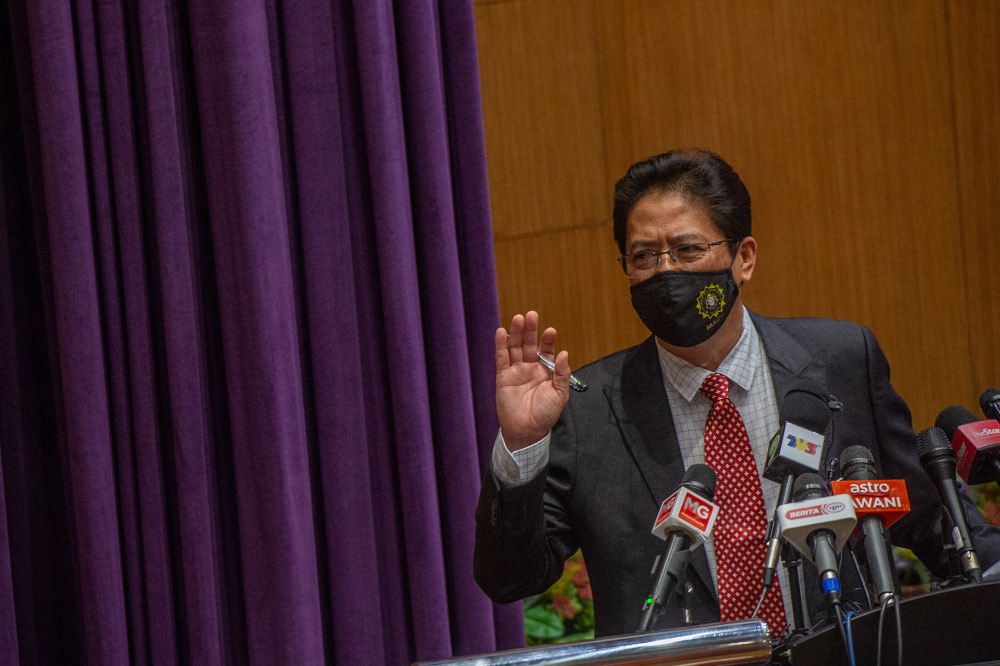 On January 5, MACC chief commissioner Tan Sri Azam Baki in a news conference admitted that he had allowed his brother Nasir Baki to use his share trading account to buy the shares in two public-listed companies in 2015. — Picture by Shafwan Zaidon

Gobind has therefore called on the attorney general (AG) to state whether there was a conflict or the likelihood that the investigations would be compromised or seen as compromised in such circumstances.

Perhaps the AG’s Chambers (AGC) should look at section 5(4) of the Act. It states that the MACC chief commissioner “shall, during his term of office as such, be deemed to be a member of the general public service of the Federation for purposes of discipline.”

All officers and junior officers of the MACC are also members of the general public service of the Federation.

The Commission that exercises jurisdiction over the general public service of the Federation is the Public Service Commission (PSC) established under Article 139(1) of the Constitution. The PSC is the Disciplinary Authority defined under regulation no. 3 of Regulations 1993.

It looks like Regulations 1993 have been overlooked, particularly regulation no. 43 on “Interdiction for the purpose of investigation”.

Regulation no. 43(1) states that “if an officer is alleged or reasonably suspected of having committed a criminal offence or a serious disciplinary offence”, the Disciplinary Authority having the jurisdiction to impose a punishment of dismissal or reduction in rank on such officer may interdict the officer for a period not exceeding two months for the purpose of facilitating investigation against the officer.

“Criminal offence” is defined as any offence involving fraud or dishonesty or moral turpitude.

An officer who has been interdicted under the regulation is entitled to receive full emoluments during the period of his interdiction.

Simply put, an interdiction is an official instruction from the Disciplinary Authority telling an officer that he or she is to stay away from work during the notice period, while still remaining on the payroll.

Perhaps the word is best described in Malay, that is, “ditahan kerja.”

In layman terms, the officer is put on a “garden leave.”

Clearly, the PSC is empowered under Regulation 1993  —  made by the YDPA under authority of the highest law of the land  —  to put an officer of the general service of the Federation to a garden leave to facilitate an investigation against the officer.

The AGC should advise the PSC to refer to its power to interdict an officer. So, let’s hear from the PSC.

That’s the Public Service Commission and not the Parliamentary Select Committee.