After absorbing everything thrown at them by the star-studded JDT, the City slickers tore the formbook to shreds when Zhafri Yahya and skipper Paulo Josue struck in the 66th and 74th minutes respectively to make sure of victory on a historic night.

The City Boys’ against-the-odds victory, which came on the 100th anniversary of the Malaysia Cup competition, also earned them a place in Asia’s secondary club football tournament, the AFC (Asian Football Confederation) Cup next season.

KL City, who were known as Kuala Lumpur FA before the privatisation of Malaysia League (M-League) clubs, managed to bag a hat-trick of Malaysia Cup wins during their heyday when they defeated Kedah in the final on all three occasions in 1987, 1988 and 1989.

With almost 20,000 fans watching from the stands, the first half saw the Southern Tigers launch a series of assaults on the KL City goalmouth but the City Boys managed to ward them off with some gutsy defending, desperate tackles and outstanding goalkeeping by Kevin Ray Mendoza.

But that doesn’t mean it was all one-way traffic as KL City did manage to launch a few threatening attacks to show that they too meant business.

However, it was JDT who nearly drew first blood when a Bergson da Silva’s shot from outside the box beat Mendoza but not the left post. 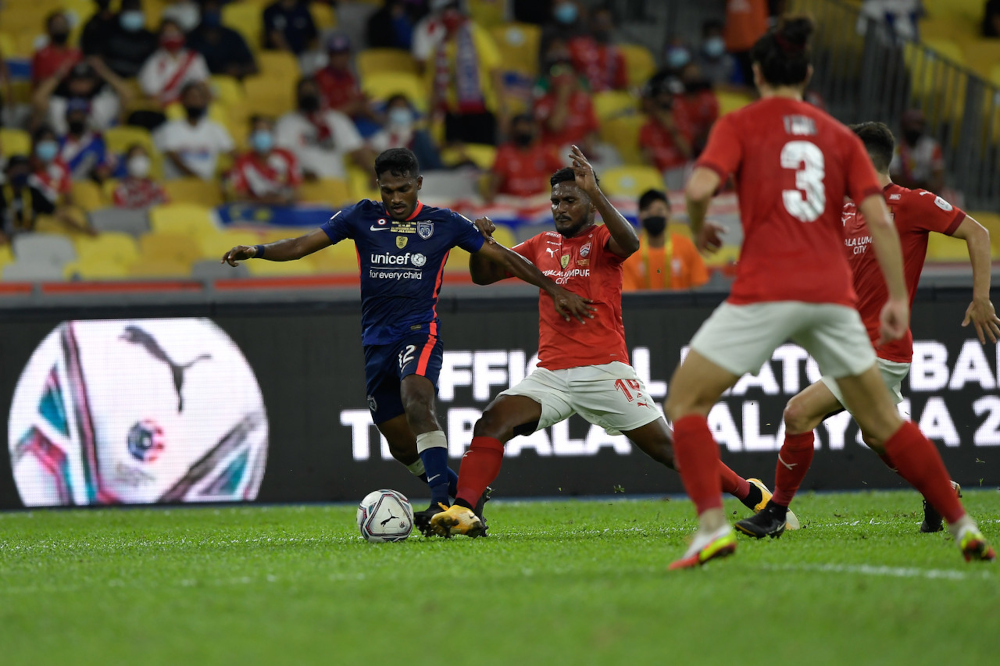 Filipino custodian Mendoza then showed his agility and composure under pressure when he saved two quick attempts.

In the 36th minute, he saved a Mauricio dos Santos header off a free-kick taken by Arif Aiman Hanapi and then, a minute later, he safely gathered a header by Safawi Rasid.

KL City, under the guidance of coach Bojan Hodak, then slowly but surely began to show their attacking intent in the second half and had a chance to break the deadlock when Colombian hitman Romel Morales broke into JDT’s penalty box in the 59th minute but quick action by JDT goalkeeper Farizal Marlias defused the threat.

JDT had been warned. The next time KL City laid siege on the JDT goalmouth, it would prove disastrous for them.

And that duly came in the 66th minute when J. Partiban sent in an inch-perfect cross from the left for Zhafri to tap home from close range.

As coach Benjamin Mora’s JDT team went searching for the equaliser, KL City delivered the knockout blow when skipper Paulo Josue chested down a brilliant pass from Hadin Azman before volleying the ball past Farizal.

In the semi-finals, KL City edged Melaka United 5-3 on penalties after both teams were tied 2-2 in the semi-finals while JDT, the 2017 and 2019 champions, dumped Terengganu FC 4-1 on aggregate.

Zhafri was later named Man of the Match during the prize-presentation ceremony, that was attended by Communications and Multimedia Minister Tan Sri Annuar Musa, who is also the KL City FC president, and Youth and Sports Minister Datuk Seri Ahmad Faizal Azumu.

As the jubilant KL City players rejoiced after raising the Malaysia Cup aloft, the crestfallen JDT players could just stand and watch.

For the record, this is the first time KL City and JDT are meeting in the Malaysia Cup final after the privatisation of Malaysia League (M-League) clubs, although the Johor FA did beat Kuala Lumpur FA to lift the Malaysia Cup in 1985.

The Malaysia Cup competition was temporarily halted from 1942 to 1947 during World War II, while the 2020 edition was cancelled due to the Covid-19 pandemic. — Bernama