Covid-19: Some travellers arriving in Singapore to be swabbed only once; border curbs eased for six more countries

SINGAPORE, Oct 24 — All travellers from Category III and IV countries such as Malaysia, Indonesia and Vietnam who are entering Singapore will no longer need to take a swab test upon arrival but will do so only at the end of their stay-home notice period, the authorities said yesterday.

Similarly, travellers from Category II countries such as France, Germany, the United Kingdom and the United State who are coming here but not on the Vaccinated Travel Lane scheme will also no longer need to take a swab test upon arrival but will do so only at the end of their seven-day stay-home notice.

In a statement, the Ministry of Health (MOH) also said that from 11.59pm on Oct 26, all travellers with a 14-day travel history to Bangladesh, India, Myanmar, Nepal, Pakistan and Sri Lanka before departure will be allowed to enter and transit through Singapore.

Later in the day, however, the ministry amended the statement on its website to say that short-term visitors are excluded.

The move to let in travellers such as work pass holders is one that authorities expect will be welcomed by businesses, especially those in the construction industry, that have been facing a dire drought of foreign labour.

These travellers will still be subject to border controls for Category IV countries. They include having to take a polymerase chain reaction (PCR) test within 48 hours before departure, serving 10 days isolation at a dedicated facility and a PCR test at the end of isolation.

Separately, Health Minister Ong Ye Kung said that the authorities will be allowing more foreign domestic workers to enter Singapore, from the present 200 a week to 1,000 a week.

“This will help us to start to clear the backlog of applications from families for domestic helpers,” he said at a news conference by the national Covid-19 task force.

Mr Ong, a co-chair of the task force, said that the Ministry of Manpower will review the entry numbers regularly together with the task force “with a view to fulfil the needs of families as quickly and as promptly as possible”.

When the new measures kick in, all travellers from countries under Category II, III and IV entering Singapore but not on the Vaccinated Travel Lane scheme will no longer need to take an on-arrival PCR test.

This means that they will only need to take one PCR test after arriving in Singapore.

These travellers will also no longer need to take extra antigen rapid tests on the third and seventh day of their isolation. This includes travellers who arrived in Singapore from 11.59pm on Oct 21.

For all Category I travellers, as well as Category II travellers under the travel lane, it was earlier announced that they will take only one PCR test when they arrive in Singapore.

Instead of serving their stay-home notices at a dedicated facility, all travellers with travel history to Category III regions will be able to do so at their place of accommodation.

These travellers were previously allowed to serve isolation at their place of accommodation only if they met certain criteria. These criteria will be scrapped from 11.59pm on Oct 26.

All such travellers must remain in their declared residence and must wear an electronic monitoring device throughout their isolation period.

“Action will be taken against those who breach their stay-home notice requirements or make false declarations,” MOH said.

“Travellers residing with unvaccinated vulnerable individuals are strongly encouraged to serve their stay-home notice in isolation in a separate room and minimise contact with these vulnerable household members.”

Travellers must take private transport, such as taxis or private-hire cars, to their declared place of residence and are strictly prohibited from taking public transport, MOH said. 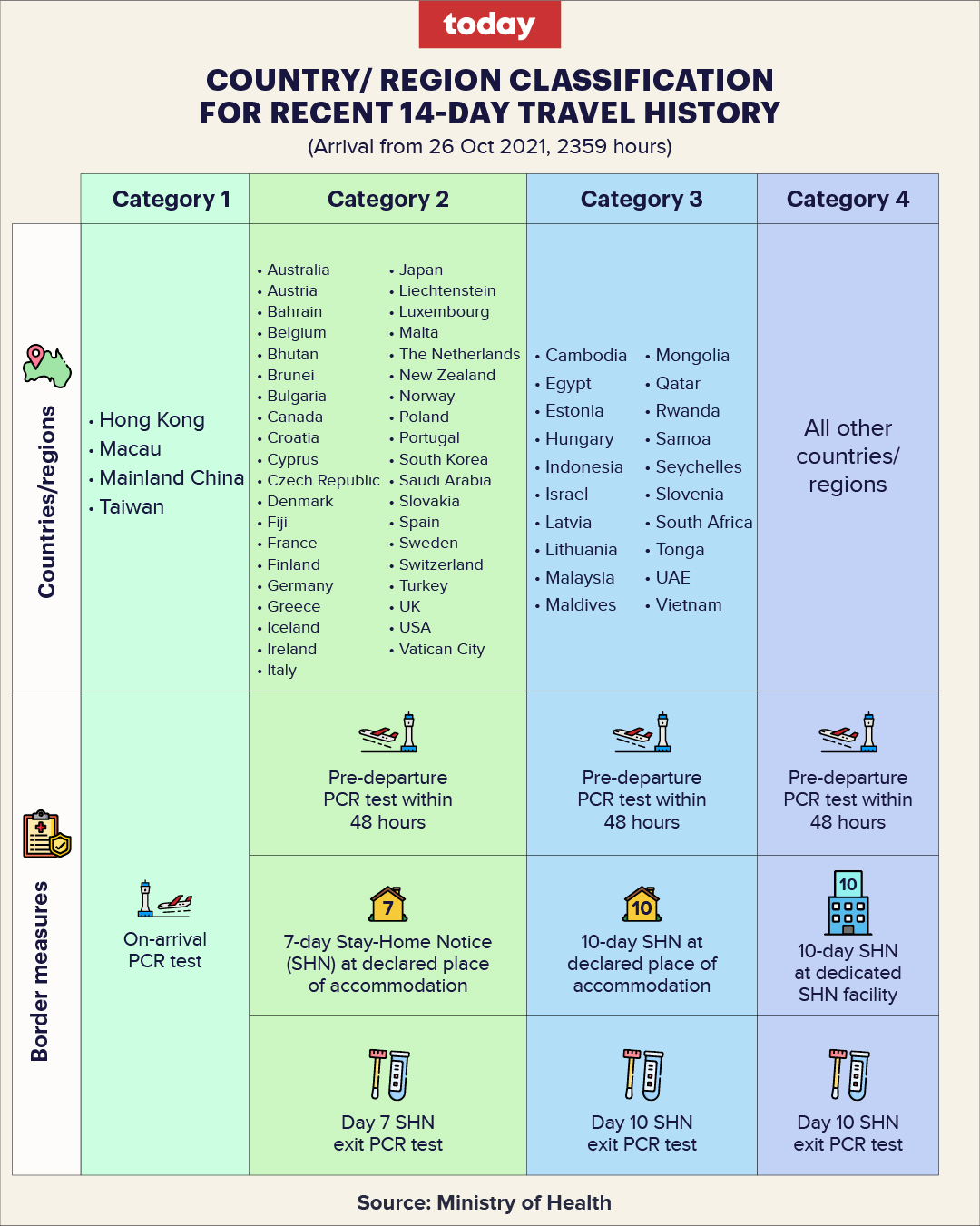