Why one party dominates Singapore politics

SINGAPORE, July 6 — Singaporeans are expected to return the People’s Action Party to power in a July 10 general election, extending its unbroken rule since the South-east Asian island’s independence in 1965.

Having overseen rapid economic growth and prosperity, the PAP has become entrenched in power. But there are other factors that have kept rivals at bay.

Voting in the former British colony is compulsory, and around 2.65 million will cast their ballots in the coming election.

Singapore’s electoral system is broadly based on the Westminster ‘first-past-the-post’ model where the candidate who wins the most votes in each constituency is elected, and the number of seats is not proportionate to the vote share. 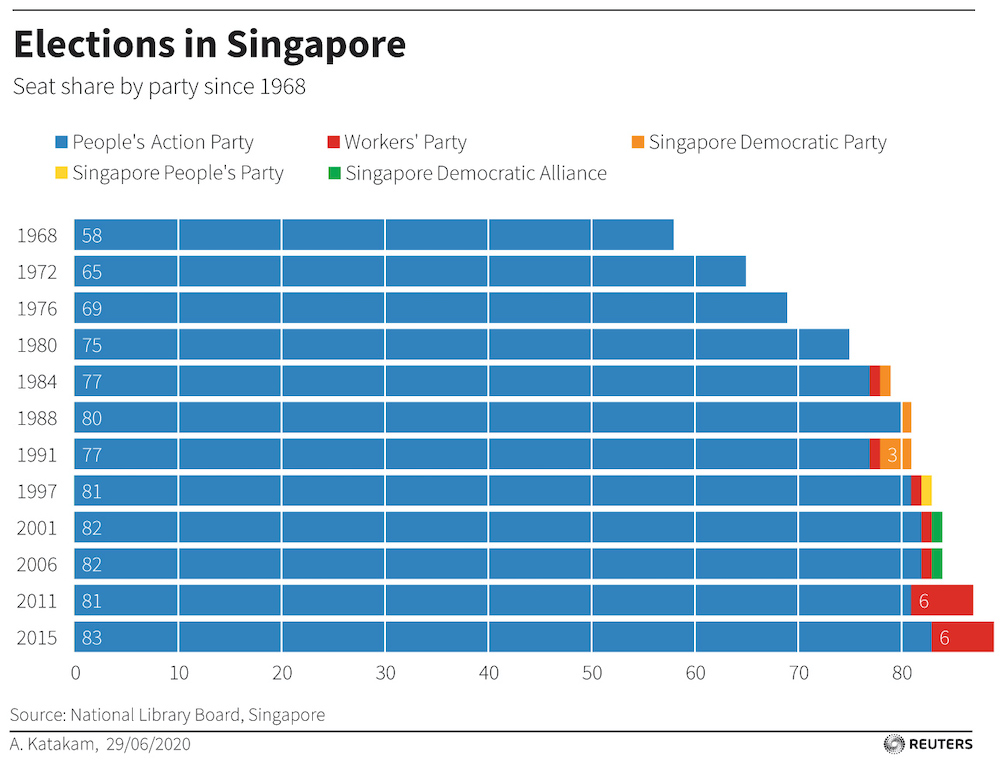 In the last 2015 election, the PAP garnered 69.9 per cent of the vote but secured about 93 per cent of parliamentary seats.

But there is also a twist in Singapore’s electoral system. In some constituencies, candidates run in teams of up to six with at least one member from a minority group — a system designed to ensure better racial representation in the Chinese majority city-state.

But the ruling party is sensitive to shifts in its overall vote share. After its worst result in 2011, when it secured 60 per cent of the vote, the PAP accelerated foreign labour curbs to allay people’s unease about immigration and jobs. Similar issues have dominated this campaign as Singapore braces for its deepest ever recession due to the coronavirus pandemic.

Rights groups like Asean Parliamentarians for Human Rights have long-flagged various other election processes that they say disadvantage the opposition.

For example, Singapore’s electoral divisions are revised regularly to reflect population growth and shifts. But the process is opaque and opposition figures have previously made allegations of gerrymandering.

The prime minister can also call for an election, with presidential approval, at short notice, creating difficulties for the opposition to prepare. The campaigning period for the coming vote is just nine days.

The financial cost of running can also be a deterrent. Candidates must put up election deposits of S$13,500 (RM41,500 to stand, compared to £500 pounds (RM2,672) in Britain, and they need to win more than one-eighth of total votes to get their deposit back.

The opposition is fractured.

A record 11 parties will be contesting the 2020 election: The PAP will stand in all 93 seats, followed by the new Progress Singapore Party (24), the Workers’ Party (21) and the Singapore Democratic Party (11). The rest will stand in 10 or fewer.

Political analysts say opposition parties tend to pitch themselves as a check against the PAP’s dominance rather than offering a viable alternative government.

The mainstream local media — which has close ties to the government — generally supports the government and state policies even during an election, rights groups say. The PAP did not respond to a request for comment and its leaders have previously said press freedoms must be practised with national interests in mind.

Opposition figures, including the late JB Jeyaretnam and the SDP’s Chee Soon Juan, have been sued by PAP members and made bankrupt. PAP leaders have said the libel suits were necessary to protect their reputations.

More recently, some opposition figures fell foul of a controversial fake news law, and were told their online posts must carry a banner stating that they contain false information. — Reuters