Thursday, 31 Mar 2022 7:14 AM MYT By Praba Ganesan
Follow us on Instagram, subscribe to our Telegram channel and browser alerts for the latest news you need to know.
By Praba Ganesan

MARCH 31 — The foreign minister wrote to the US secretary of state last week, which is not completely ground-breaking. All countries write to America.

However, he wrote in Malay.

Cue for all kinds of Malaysians to lose their minds.

The former pride and joy of the British Empire has lost its lustre. Moan and groan, end of history.

But here’s the rub. As much as Anglophiles accuse the Malay right, led by Prime Minister Ismail Sabri Yaakob, of certifying Malaysia’s relegation from a nation of English speakers to also-rans, they miss the other point: they threaten to belittle the Malay language.

In an election year, where three factions — Umno, Bersatu-PAS and Pejuang — battle for the hearts and souls of Malays, playing up the language or better defending it is campaign gold. 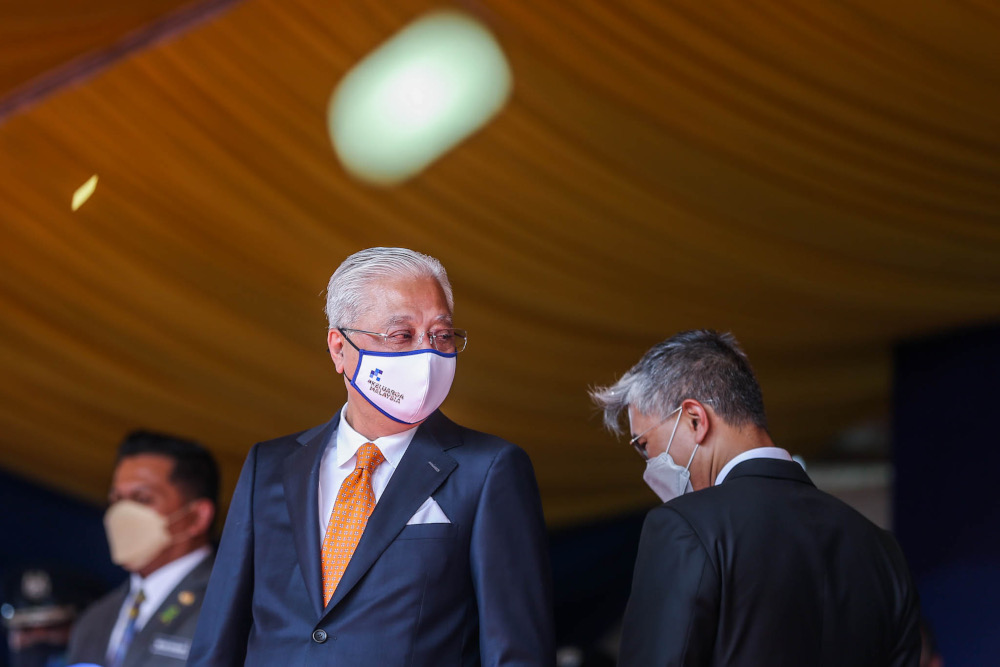 Ismail Sabri, most opinions converge, covers his English inadequacies with the pretence to prioritise Malay. — Picture by Hari Anggara

The prime minister loses no sleep or votes from being adamantly Malay speaking. Shout a bit louder, he’d appreciate the criticism.

Neither does the foreign minister. Saifuddin Abdullah’s defence of Pahang’s Indera Mahkota is no walk in the park. The parliamentary constituency won by PKR the last three elections is a mixed seat perfect for the party.

Which is why for the Bersatu candidate, being accused of loving Malay too much at the expense of English is not a burden. It is a splendid counterweight, to muster Malay support to offset the loss of Chinese and Indian votes to either Pakatan or BN.

Saifuddin will remember losing Temerloh in 2013 to the openly chauvinistic Nasruddin Tantawi where his liberal views made him an open target.

Settle down and unpack the matter in a reasonable manner.

The foreign service has various means to achieve Malaysia’s international objectives, regardless of language. The Washington Post does not report on communique from Malaysia quite as often. Our sense of self-import might require a modicum of restraint in this instance.

We are important but global politics is not driven by Malaysia’s appetite.

Repeated to death, this whimsical line on how state department employees rather toss the minister’s letter in the trash than translate it.

Firstly, if the US ignores Malaysia at the first turn because it cannot be bothered to translate from Malay, it really speaks volumes about our country’s standing in the world’s eye.

In reality, all communication from Malaysia is worth reading by state employees. One half of the world’s busiest Straits of Malacca and pivotal member of Asean to counter China’s influence in Asia Pacific, South China Sea in particular, Malaysia is listened to.

That’s the fine line where Malaysia sits. Not a force in international geopolitics but geographically too important to be ignored.

The use of Malay does not nullify anything.

The slow demise of English as a dominant language did not happen overnight.

At independence, a minority of Malaysians were highly educated but all in English.

Over 60 years, the broadening of education to all Malaysians in Malay, with the continued presence of English, only meant one thing eventually, Malay being the dominant language of the people.

This column agrees vehemently that English is critical for Malaysia’s future to compete with the world. Those depressed by the Malay overemphasis by the current government should realise changes are underway.

The pendulum swings the opposite direction in English’s favour as globalisation goes unimpeded — rise of private education, emergence of alternative education, children taught by Internet not taska first and streamed entertainment. Unfortunately, truer for M40 than B40 families.

Conceded, the missteps from the past decades mean Malaysia has to catch up with neighbours, but in a generation more Malaysians are likelier to be comfortable in an English speaking environment than presently.

But for now, barking at a government  going political in an election year does not change the previous errors. Take heart in the other changes which raise the use of English.

Ismail Sabri, most opinions converge, covers his English inadequacies with the pretence to prioritise Malay. Which works to his advantage.

What worries more, much of the attacks on his language policies verge on abuse of Malay as a language of standing.

To say Malay is not a language the world wants to translate, hurts.

Put the prime minister and his party aside, and realise Malay is our language.

Our pledge was to speak as one nation by speaking to each other in our language. That Malaysians can exchange their most intimate thoughts, misgivings and fears with each other through the Malay language, so that we solve our problems and bridge our cultural distances through the use of one language.

Where is the sense of obligation to that higher ideal?

Think about it. If in Semenanjung, all Malaysians spoke Malay with consummate ease and connected through it, Umno, Bersatu and Pejuang’s race exclusivity would look ludicrous.

The question would be, “Why separate people when they speak like brothers to each other in their common language?”

Which is why the fairer minded among us have to watch carefully what the government does but not fall for every ploy intended to shore up votes in the coming election.

The balance between Malay and English in this Malaysian reality is not exact science. It requires compromise and even more discourse.

But to condemn one to elevate the other won’t have the desired effect. It only helps one political party to pick up enough parliamentary seats to hamstrung progress on all other fronts.