Golden age on the horizon for Asian golfers?

JANUARY 24 — When Hideki Matsuyama thumped a magnificent 3-wood approach from 276 yards and landed his ball inside three feet of the flag to equal a record that has stood for over a decade, KJ Choi was the least surprised to see that moment of magic by the Japanese superstar.

Choi, arguably the greatest golf export from South Korea, has proudly held the record of most PGA Tour victories by an Asian golfer with his haul of eight titles since 2011 and he was beaming with pride to see Matsuyama matching his collection at such a rapid pace.

The Korean legend was nearly 41 years of age when he claimed his eighth and final PGA Tour title at the 2011 Players Championship and has no doubt that Matsuyama, who turns 30 on February 25, will go on to set a new and much higher benchmark for other Asians to chase and emulate in years to come.

Choi met Matsuyama for the first time about 10 years ago and remembers being impressed by the young man’s attitude towards the game and passion in wanting to become the best. He said Matsuyama was “unique” and possessed “special golf skills”.

“When I first met Hideki, he was about 19 or 20 years old. I thought he had the passion from a young age. That’s the thing I remember about him. He is very calm and takes control of himself. He has lots of passion in golf and I said to myself he has a future in the game. He had a special golfing skill and was different from others. He had techniques which was unique. The flexibility and speed was great and I think he will improve more from now onwards,” said 51-year-old Choi, who now plays primarily on PGA Tour Champions (over-50 circuit) but still makes the occasional appearance on the PGA Tour.

Matsuyama won the Sony Open in Hawaii in style in a playoff against Russell Henley over a week ago and the manner in which he produced his third win within the space of nine months was remarkable. He trailed by five with nine to play but chipped into Henley’s lead with four clutch birdies before delivering the sucker punch in the playoff with the stunning 3-wood shot.

What was striking was the fact Matsuyama produced his career best putting week in Hawaii, gaining 7.26 strokes over the field when his flatstick has so often held him back from even greater success in the past. Amazingly, he sits a lowly 174th in putting this season, whereas he was 175th last season and 170th during the 2019-20 campaign. In sharp contrast, he ranked second for Strokes Gained: Tee to Green (2019-20) and was 15th last season, which largely explains why he was winless for over three years until his memorable Masters triumph last April which he followed up with another win at the Zozo Championship on home soil in October 2021. 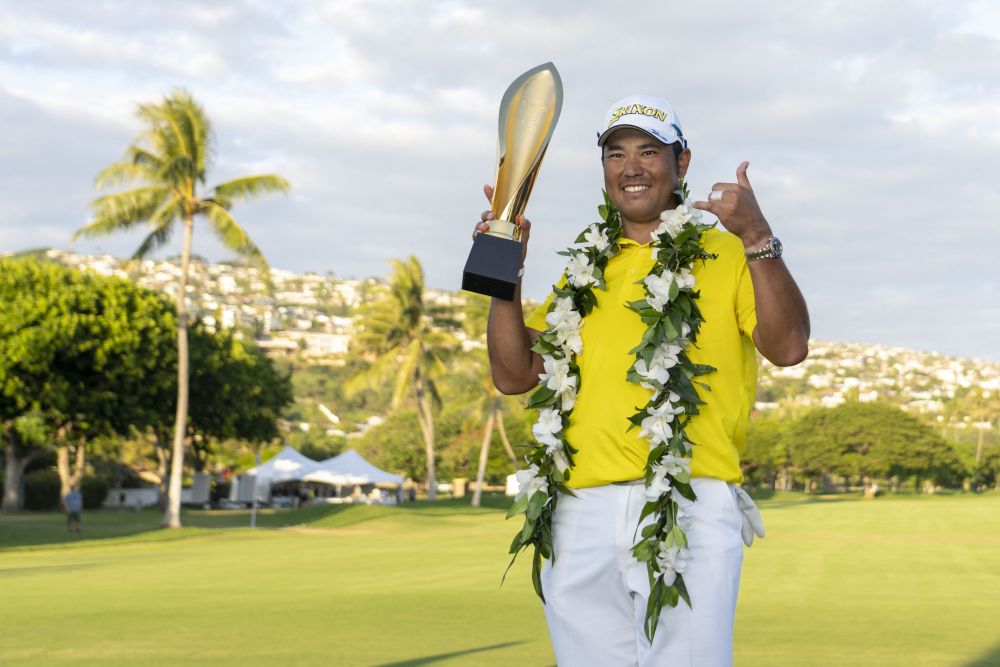 Hideki Matsuyama hoists the trophy during the final round of the Sony Open at the Waialae Country Club, Honolulu January 16, 2022. — Reuters pic

Choi believes Matsuyama will now free-wheel his way into double digits for career wins on the PGA Tour and said the key was for the ultra-talented Japanese to stay injury-free as he prepares for life in his 30s.

“It is important he doesn’t get injured. That’s the top thing. If he keeps his condition, he definitely can win more events. I always think athletes are here to break records and to make new records. And we always need to be at our best in order to do that. I’m happy Hideki achieved what I have fulfilled,” said Choi, who was the first Korean to earn a PGA Tour card in 1999.

With Matsuyama, who returns to action at the Farmers Insurance Open at Torrey Pines this week, trending upwards, Choi believes a golden age is now on the horizon for Asian golf, with other Korean rising stars including Sungjae Im, Si Woo Kim, KH Lee, Seungyul Noh and Sung Kang carrying the charge. Kim, 26, is already a three-time winner, Im, 23, has won twice while Lee and Noh, both 30, and 34-year-old Kang hold one victory each. Choi also believes Matsuyama can become World No. 1 in the near future.

“Hideki’s record will impact the younger generation and other Asian players will want to become like him. I think Hideki’s win will affect his career a lot. I remember me saying in an interview there will be a No. 1 Asian player soon. We have Asians who have won majors, and if Hideki keeps his condition without having to go through injuries, he will get many more wins.”

With the 2022 Presidents Cup scheduled to be played at Quail Hollow this September, Choi, who has been a mainstay for the International Team as player and assistant captain, reckons Matsuyama can also play a starring role in captain Trevor Immelman’s plans to topple a mighty United States Team.

“When the Presidents Cup was played in Korea in 2015, I told Hideki it is important to look towards to the future. I said if you want to play golf for a long time, you have to work hard all the time and you need to respect and take care of other players and your family. When he won the Masters and those recent wins, he managed himself well. He doesn’t seem to lose his temper and he is trying his best in every event which makes happy to think about him in the upcoming Presidents Cup. Hideki’s success will impact our team in positive way,” said Choi.

* Chuah Choo Chiang is senior director, marketing & communications – Apac, for the PGA Tour and is based in Kuala Lumpur.