JUNE 4 — Phil Mickelson, KH Lee and Justin Thomas are as different as they come but the trio delivered feel-good and standout moments on the PGA Tour to show the beautiful game of golf is in a very good place and thriving for the right reasons.

One tale was about winning, another about dreaming and the third was on giving.

Belonging to the generation of greats who include Vijay Singh and Ernie Els, the left-handed Mickelson, who turns 51 on June 16, would have been forgiven if he had chosen to wind down his World Golf Hall of Fame career on the over-50 circuit. However, Phil the Thrill showed he wasn’t done just yet competing against the young guns and displayed what winning truly meant with his heart-stopping victory at the PGA Championship in May making him the oldest major champion in history.

Naysayers often say no one in their 50s should be contending, let alone winning major championships but golf is such a great sport that Mickelson defied Father Time, inconsistent form — he registered only one top-10 in 18 previous starts – and a chasing pack led by Brooks Koepka and Louis Oosthuizen to secure his improbable but well-deserved sixth career major.

So, what is Mickelson’s secret to his longevity?

It appears to be combination of coffee, meditation and a massive dose of desire in wanting to win as he struck a winning chord for the so-called oldies. “My desire to play is the same,” explained Mickelson, now a 45-time PGA Tour winner.

“I've always been intrinsically motivated because I love to compete, I love playing the game. I love having opportunities to play against the best at the highest level. That's what drives me, and I think the belief I could still do it inspired me to work harder.”

Age catches up with everybody, especially at the highest level of any sport but Mickelson has refused to ride into the sunset. He has not lost any of his speed and in fact pounded a monster 366-yard drive during the final round of the PGA to outdrive playing partner Koepka, a man who is 20 years younger, by five yards on the 16th hole with the tournament on the line. 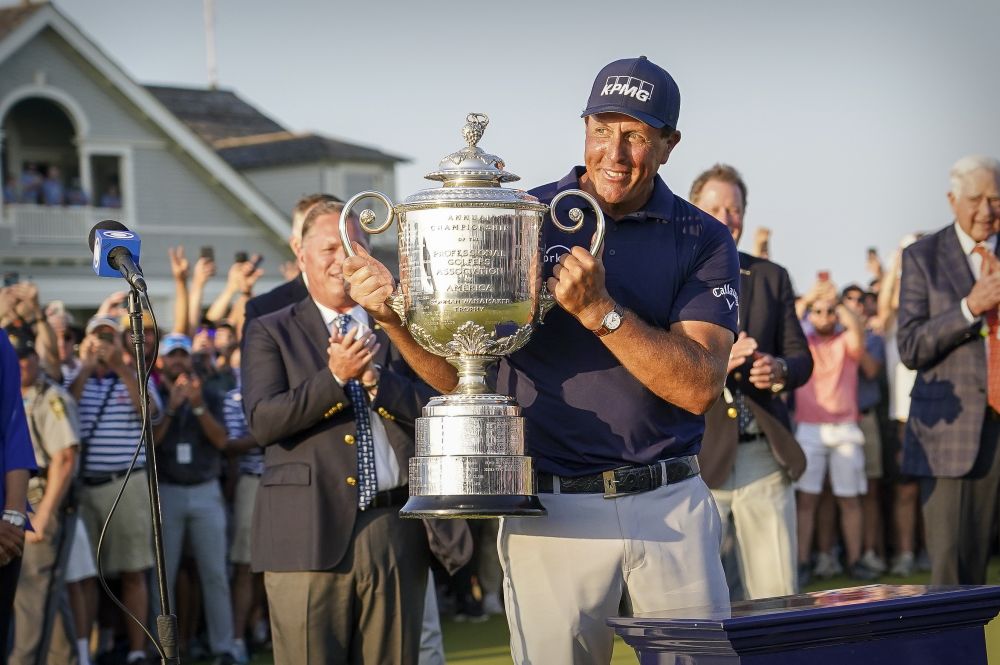 In the middle of 2019, Mickelson embarked on a six-day fast and consumed only coffee and water. Yes, you read this right as coffee is meant to increase the metabolism rate and reduce the hunger pangs. Lefty wanted a “hard reset” and subsequently lost 15 pounds and emerged leaner and meaner. Still, there were hurdles to overcome. He lamented about his inability to maintain focus and took to meditation, something which India’s Anirban Lahiri, a former Asian No. 1, will attest to.

At Kiawah Island’s Ocean Course, Mickelson was a sea of calm, taking in deep breathes in between shots to maintain his laser-sharp focus on a demanding course and the longest yet in major history. Breathing is a meditative practice observed by many and his training also included playing two rounds of golf on some days to help him sharpen his thinking. “I might try to play 36, 45 holes in a day and try to focus on each shot so that when I go out and play 18, it doesn't feel like it's that much. I might try to elongate the time that I end up meditating. I'm trying to use my mind like a muscle,” he said.

Lee, one of Korea’s rising stars on Tour, was himself doing plenty of visualising work during his days on the Korn Ferry Tour, but his method was probably more of the dreamy kind. “Almost every night I dream of this,” Lee said about his aspirations to win on the PGA Tour. “It would be amazing.”

With a solid amateur career behind him — Lee won the gold medal with the Korean team at the 2010 Asian Games — he subsequently won twice each in Korea and Japan before chasing his American dream, which Korean legend KJ Choi had paved the trail some two decades ago.

As one of the hardest working players and funniest — he once said he wanted to be the World No. 1 golfer and World No. 1 sexiest golfer — Lee, 29, was duly rewarded following a three-stroke victory at the AT&T Byron Nelson as he became the eighth Korean winner on Tour. Choi’s presence by the 18th greenside made it extra special. “I didn’t know he was waiting and I was very thankful. He said many nice things and it was an honour to have him there for my win. He’s the big daddy,” said Lee.

From chasing his own dream, Lee now hopes his breakthrough will inspire other Korean kids back home to start chasing their dreams. “I grew up watching the PGA Tour and wished to become part of it. I think our performance would make kids feel the same way now. I think they will try harder to come over.”

Making the grade at the highest level often takes hard work, talent and some luck and when mini-tour regular, 27-year-old Michael Visacki Monday-qualified for the Valspar Championship to earn his first ever PGA Tour start, his reaction on a video call with his father hit U.S. national news. “I made it,” Visacki sobbed on the phone.

Although he missed the cut, Visacki’s story earned him a sponsor’s exemption to the Charles Schwab Challenge where he received a surprise text message from 2017 FedExCup champion, Justin Thomas, who invited him to play a practice round together. Thomas, one of the nicest guys on Tour, went a step further later in the week by giving him a cheque to help Visacki chase his dream.

Thomas said: “I know Q-School's expensive, I know playing in these events are expensive, and like any little way I can help out, I want to. I told him if you ever want advice, if you ever want to pick my brain, I'm here for you. If it's a difference of him playing on mini tours or getting his Korn Ferry Tour card the next year, then, that means more to me than any amount of money I could ever give him or anybody. We're all out here trying to win golf tournaments, but changing people's lives and helping people who are less fortunate than you is sometimes more important than that.”

Winning, dreaming and giving — oh, what a wonderful game golf is.

* Note: Chuah Choo Chiang is senior director, international marketing and communications, Asia Pacific for the PGA TOUR and is based in Kuala Lumpur.