What it meant to win the Players Championship

Monday, 08 Mar 2021 1:41 PM MYT By Player's Blog
Follow us on Instagram, subscribe to our Telegram channel and browser alerts for the latest news you need to know.
By Player's Blog

MARCH 8 — In 2000, I practised regularly on The Stadium Course at TPC Sawgrass as I lived in Jacksonville, Florida, for nearly a year after I moved to the United States to pursue my PGA TOUR career. I would see the national flags of THE PLAYERS Championship winners being raised for 12 months of the year and I would often wonder if our Korean flag would be raised one day. Even after I moved to Houston, I still visited TPC Sawgrass to practise and the very same thought would cross my mind each time.

I qualified for my first PLAYERS Championship in 2002 and finished in the top 30, which I felt was a good effort. It was the start of an annual visit to TPC Sawgrass, which is a truly challenging golf course as it is long and difficult to navigate.

When I arrived for the 2011 edition, I remember finishing tied second in New Orleans a couple of weeks prior, so my game was in great shape. Interestingly, my caddie Andy Prodger had said this to me at the start of the week: “I don’t think you can’t go back to Korea this Sunday. I don’t know why, but I just feel it.”

As I think about this now, Andy must have sensed something good was going to happen for us that week. He probably felt it was maybe time for me to win this prestigious tournament, even though I had never registered a top 10 at THE PLAYERS in nine previous attempts.

After shooting a first round score of 70, making the halfway cut as my primary goal. Playing at TPC Sawgrass is never easy, as you need to shape the ball well and hit quality golf shots as the course tests every aspect of your game.

I followed up with a nice 68 in the second round to move just outside the top 10 and it eased my mind. From there, I started thinking about getting a top-10 finish, and I focused harder on every shot. On Saturday, I moved into the top five midway through the round and, when play was suspended due to bad weather, I braced myself for a tough Sunday as I had to play 27 holes. Thankfully everything worked for me and after signing for a third-round 67, I was only one shot back with one round to play.

It was a really close fight all day. David Toms led for most of the final round but found water on the 16th hole while leading by one stroke. I then made a good birdie on the famous par-3, 17th hole to take the lead, but David produced a good birdie on the last hole to force a playoff, which I eventually won after he unfortunately missed a short par putt in the first extra hole at the 17th. 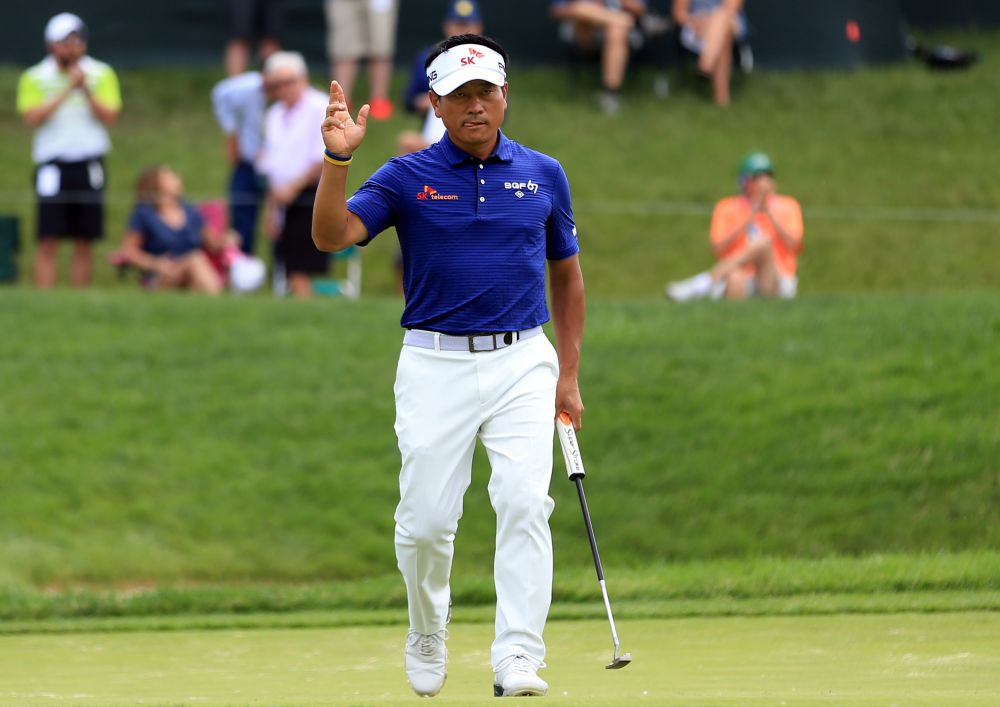 KJ Choi waves to the crowd on the 14th green during the second round of the 2019 Memorial golf tournament at Muirfield Village Golf Club May 31, 2019. — Reuters pic

Finally, I realised I was THE PLAYERS champion. Amongst my eight PGA TOUR wins, I cried the most after winning this one. I was genuinely thrilled with my accomplishment as I think every player desires to win THE PLAYERS, as it is the strongest tournament in the world and also the TOUR’s flagship event. Becoming the first Asian and Korean player to win made it extra special and I was really proud to shoot under par for four rounds.

THE PLAYERS victory is no doubt the main highlight of my career and it’s amazing that this was achieved 10 years ago now. When I first got onto the PGA TOUR, I never imagined I would stay in the US for a long time as there was no other Korean player on TOUR back then. It was not an easy journey coming out from my home town in Wando, Korea and playing golf as a professional athlete.

I am very thankful that many people helped me along the way and I would not have achieved the success all by myself. As you know, my parents were ordinary farmers back home, so they couldn’t afford the costs of buying golf clubs, or paying for my training or green fees. However, many people in my hometown helped me. Some gave their used clubs and golf balls for me to use and sometimes, they helped by providing money for my practice.

I also held part-time jobs at the practice range and at the car wash so that I could save up money to pursue my golf dream. Now, I know I should be helping others because I received financial and mental support from so many people. One of the most fulfilling things about the PGA TOUR is the charitable impact that it has on the communities and I learned from other players about their charitable initiatives. It was a matter of time before I launched my own foundation called the KJ Choi Foundation which I currently support up to 60 talented and young students and golfers with scholarships through funds raised from various activities.

I have also made it a point to make donations and offer support towards disaster relief, including after my PLAYERS win in 2011 where I supported relief efforts after tornadoes hit the south eastern part of the U.S. Perhaps, this was one of the reasons why I received the Charlie Bartlett Award in 2013 which recognises individuals who contribute towards the betterment of society. With all the love and gratitude I have received in my life, I wanted to dedicate myself to helping the less fortunate and kids. I also enjoy passing my knowledges and skills about golf and life to the new generation and I am proud of this. I’m happy whenever I hear good things about the kids’ developments and it is a priceless pleasure.

There are a few things that people talk about when they think of KJ Choi. Some will remember me as a player who changes his grip and enjoyed great success thereafter, or that I only wear visors and my nickname is “The Tank” due to my single-minded attitude. Of all of the descriptions, I like the phrase, “KJ Choi, he worked really hard”, the best. I like this because people acknowledge I have worked hard throughout my entire life. I think that will be my legacy.

Note: THE PLAYERS Championship, the TOUR’s flagship tournament, will be broadcast in Malaysia on Astro Golf Channel and GOLFTV powered by PGA TOUR.

*Korea’s KJ Choi blazed a trail for Korean and Asian golf in the early 2000s by playing his way onto the PGA TOUR. From humble beginnings, his glowing career includes eight PGA TOUR wins — the most by an Asian golfer — but none was more satisfying that winning THE PLAYERS Championship exactly 10 years ago.