AUGUST 27 — The on-going debate about whether our country should abolish examinations for Years 1-3 (but why only these years?) needs to first address the nature of assessment itself.

In Malaysia, the word “examination” almost certainly means a closed-book individual written attempt at a question sheet which lasts about one or two hours, after which the student’s marks are graded in comparison with his/her class or school.

The previous paragraph already contains four key educational concepts which we could unpack:

1. Closed-book (no textbooks or references allowed, students need to write “from memory”)

We’d find this practice questionable if it wasn’t so taken-for-granted. But why must this be the case? Isn’t the closed-book phenomenon, in fact, the key culprit behind all the rote-learning and memorisation so prevalent in our education system?

And how relevant is closed-book recall in a world of Google and on-demand search engines? What if we retained examinations but allowed students to refer to their textbooks?

Obviously, this would require modifying the questions i.e. we wouldn’t be able to test for recall anymore, would we? But, again, why are we so hung up on a student’s ability to vomit out facts or information?

2. Individual (the single student is the main focus)

Makes you wonder about the rampant individualism in society, no?

For almost two decades, students are institutionally nurtured to think primarily of themselves. Imagine SPM having grades for, say, clusters. Ahmad, Kar Wai and Indira’s project scored 93 per cent and that’s it. As a team they excelled. Nothing more, nothing less.

And yet the idea of students being assessed in pairs or groups still appears anathema to the education system.

With the flood of thinking and discourse on team-work and team “dynamics”, isn’t it surprising how education still valorises the lone thinker?

School systems, however, have a tendency to make the Most Important Thing be about the student as an individual alone, leaving things like empathy, co-operation and community-engagement to the “extra-curricular” dimension. Is that healthy, you think?

3. Written (no other forms encouraged)

If exams didn’t always involve pen/pencil and paper, do you think more students may warm up to them, or at least be less afraid?

Of course kids still need to write their thoughts down but is the written word the only form/proof of intellectual progress? What about drawing or speaking or “showing” or expressing one’s thoughts via a computer or just, uh, “doing”?

In many schools today, thankfully, project work is part of the assessment. Problem is, it’s usually not more than 10 per cent (20 per cent tops).

I wonder if this is due to any serious consideration of educational criteria, or simply because schools remain confined within some Asian culture in which “personal ability” remains the primary unit of educational assessment.

In other words, do you think maybe teachers and parents fear that anything other than a “written examination” may be invalid somehow?

4. Comparative marks (students are graded relative to each other)

In Malaysia, each time a kid shows her parents her exam paper, one of the first thing they are bound to ask is, “How did the rest of your class do?”

Welcome to norm-based assessment, where the primary goal is to be “better than” everyone else or, at least, the average.

This is why it’s not inaccurate to characterise the “straight-As” game as one involving social status; we’re not so keen on our kids being learners as opposed to winners (of some dodgy game).

But try to implement a system whereby students only get a number or symbol indicating their progress, but completely independent of other students, and you’ll have parents (especially Asian ones) up in arms. Welcome to the early rat race.

The table below summarises the traditional MO of examinations (“Today”) with what could be the case in the future (“Tomorrow”): 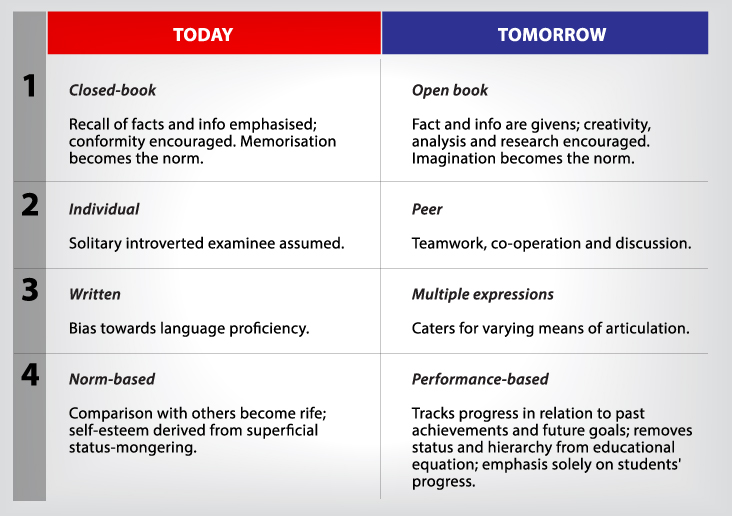 The bottom line is if we want to get even close to “tomorrow’s” way of assessing learners, we need to first move away from mindsets heavily wedded to “today’s” way of doing things.

So should Malaysia abolish examinations for Years 1 to 3? Whatever the decision, we must first change certain mindsets about what it means for a student to be “examined.”

And why in the name of Malaysia Baharu are we limiting this discussion to Year 3 and below?