Execution of drug convicts leaves a big mess for Jokowi

Sunday, 03 May 2015 5:59 AM MYT By Devi Asmarani
Follow us on Instagram, subscribe to our Telegram channel and browser alerts for the latest news you need to know.
By Devi Asmarani

May 3 — Whatever positive outcome President Joko Widodo had expected of this week’s executions of eight drug convicts, it’s clear he has failed to achieve it.

The dramatic execution of the inmates, seven of whom were foreign nationals, has made a big mess of things, bringing into disrepute the president’s global standing, and straining Indonesia’ s diplomatic ties with several countries, especially Australia.

Even in Indonesia, where support for capital punishment for drug traffickers is strong, the mass execution managed to polarised the country, further alienating a big chunk of his supporters who have already started to lose patience with his leadership. It also disillusioned those who expected him to honour his campaign promise to protect human rights.

One convict, Mary Jane Veloso, was spared at the last minute, after the person who recruited her for the job turned herself in to Philippines police. Veloso’s sentence was reprieved pending the legal process in the Philippines. A mother of two boys and a migrant worker who was subjected to domestic abuse before being duped to becoming a drug mule, Veloso drew the most sympathy from the Indonesian public, many of whom campaigned for her to be spared.

A French national who was supposed to be executed on the same day was also granted a temporary reprieve a few days before the execution, because of an outstanding legal complaint in his case. 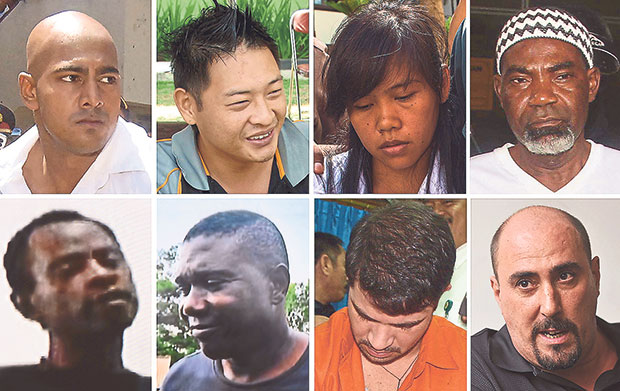 Of all the countries whose nationals have been executed or are currently on Death Row, Australia has voiced the loudest protest. Following Wednesday’s execution, Prime Minister Tony Abbot recalled its ambassador to Jakarta and called it “a dark moment” in the country’s relationship with Indonesia. There is some talk that Australia, which at about US$480 million (RM1,725 million) a year is the second biggest donor to Indonesia after Japan, might cut its foreign aid to the country.

Jakarta has responded by saying it has exhausted all legal avenues, and that Canberra must respect its legal sovereignty. Many Indonesians have also responded to Abbot’s tough talk and Australian media’s critical coverage of the issue with the usual jingoistic and anti-Western responses.

To those with a more critical outlook, however, this episode has left a sour aftertaste, making them question the kind of leader they have put in power with so much hope just six months before. There is a disturbing sense that he has opted for an easy way to boost ratings at the expense of human lives.

With his popularity on the slide, Jokowi desperately needs a positive story.  The execution exploits the Indonesian public’s anxiety over the increase of illegal drugs consumption. It also plays the nationalistic card: executing foreign nationals sends signals that you’re a fearless leader; backing down will be seen as a weakness.

A look at each of the Death Row convicts, however, reveals some questions that in a well-functioning justice system would merit a further review of some of the death sentences.

Zainal Abidin, the sole Indonesian executed in this batch, was arrested at his residence in Palembang, South Sumatra for the possessions of about 59 kilos of marijuana. He claimed it was stored there by a friend who turned him in after being caught peddling drugs. He was initially given a 15-year prison term by a district court in Palembang, but the sentence was increased to death sentence at the higher court a month later.

He filed for a judicial review of the case in 2005, but the Palembang District Court did nothing about it for nearly 10 years, until the case was forwarded to the Supreme Court early this month, giving it less than a week to hear it.

There were also allegations of judicial briberies. Australians Andrew Chan and Myuran Sukumaran said they were offered to have their sentences reduced to 20 years in exchange for bribes. The same claim was made by the wife of Nigerian Silvester Obiekwe Nwolise. There were never any serious efforts to investigate these accusations.

And then there was blatant disregard for humanity. Brazilian Rodrigo Gularte who was caught smuggling 19 kilos of heroin encased in his surfboard, had been diagnosed with schizophrenia and bipolar disorder for 20 years, a condition that should’ve made him unfit for trial.

Reports quoted witnesses as saying that he was not even aware that he was going to be executed until seconds before he faced the firing squad.

Other convicts were either not attended to by a lawyer or were not accompanied by an adequate interpreter during their legal processes.

Such a flawed legal process in a country whose justice system already suffers from credibility should have been enough to at least delay the execution. Rushing to take the lives of those who were not posing an immediate threat is a pathetic attempt at appearing strong and firm.

Furthermore, with a number of Indonesians on Death Row overseas, Jokowi just lost his moral authority to defend these convicts, many of whom are domestic workers who have suffered abuses.

The strong posturing turns unconvincing, however, when it comes to fighting corruption, especially as he is facing massive pressure to toe the line of the party that nominated him, the Indonesian Democratic Party-Struggle.

He appears unable to stop the Indonesian police from abusing its power to undermine the Corruption Eradication Committee (KPK). As the execution saga unfolded this week, police detained KPK’s former chief and its senior investigator on seemingly trumped-up charges.

A survey conducted by the influential daily Kompas on his six-month presidency shows that almost half of Jokowi‘s own voters expressed dissatisfaction with his performance. About 64 per cent surveyed said they were not happy with his effort to fight corruption. His approval rating continued to slide further especially on the economy, where he was seen as failing to control prices of basic supplies, reduce poverty, and create jobs.

To win easy public support by executing convicts is a cynical move that sooner or later will show its inefficacy. Jokowi needs to learn from this mess and impose a moratorium on capital punishment.