Sunday, 05 Apr 2015 6:50 AM MYT By Devi Asmarani
Follow us on Instagram, subscribe to our Telegram channel and browser alerts for the latest news you need to know.
By Devi Asmarani

APRIL 5 — In the last two weeks, the Indonesian media have focused their attention on the presence of the Islamic State of Iraq and Syria (ISIS) followers in the country, following the recent arrests of those with links to the extremist group.

The numbers vary according to who is counting, but the government estimates that more than 500 people have left the country to join the movement. On the recommendation of the National Counterterrorism Agency (BNPT), the Ministry of

Communication last week blocked 19 websites it claimed to be spreading violent messages and recruiting Indonesians to join ISIS. The move was reversed the next day, however, after a major public outcry, including from civil society groups often attacked by these very websites.

This type of knee-jerk reaction and flip-flopping exposes a hasty and imprudent decision-making process that could undermine authority in the future. The initial move to ban the websites sent the wrong message to civil society and mass media that saw it as a precedent of a repressive measure that could threaten freedom of speech.

It also fed into the perception built by conservative Islamic groups that the Joko Widodo administration is anti-Islam, something that, though preposterous, has formed the basis of opposition against him.

These blocked websites also happen to have been critical of him and supportive of his opponent Prabowo Subianto during last year’s campaigning season.

The legal basis for the blocking of the websites is the controversial 2008 Information and Electronic Transactions (ITE) Law, which, among others, bans hateful content related to matters of religion, race and ethnicity.

The same law has been used to prosecute and send to jail people found guilty of minor offences — including one who expressed hatred of her adopted city in her own Path account — but these cases bear little political implication, unlike the ban on the hardline Islamic websites. 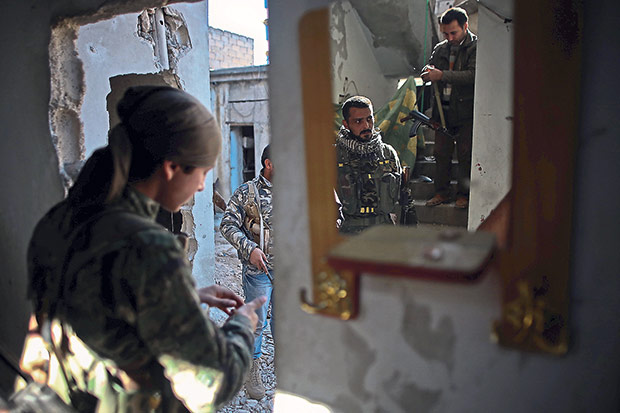 A fighter of the Syrian Kurdish People’s Protection Units (YPG) prepares to fight against Islamic State (IS) group on November 7, 2014. — AFP pic

Instead of arbitrarily blocking websites used as platforms to spread hateful religious sentiment, the government should monitor them tightly to gather evidence to prosecute them for the content that really violates the ITE Law, the way it prosecuted other ITE cases.

This is important as it sends a message that it does not tolerate the spread of terrorist ideology in Indonesia, while not being seen as indiscriminately targeting websites with merely hardline perspectives. After all, the Internet has been used by ISIS and other radical movements effectively to spread their ideology and lure new recruits.

But to expand the reach beyond the digital realm, what the government should have been doing since two decades ago is to come up with a massive and effective campaign against radical Islamic teaching, intensively involving the country’s two largest Muslim organisations Nahdlatul Ulama and Muhammadiyah, as well as the conservative Indonesian Council of Ulema and many popular Muslim clerics.

After all, the profiles of ISIS recruits in Indonesia differ from those in Western countries, where the movement appeals to disillusioned or impressionable youngsters, mostly coming from Islamic culture origins, who struggle to find their place in society.

As more evidence emerged, Indonesians who joined ISIS appear to be second generation or survivors of convicted Jihadis; people who left because of the promise of better earnings; young recruits attracted by religious-based heroism; or a combination of any of the above.

The first two types of recruits were likely driven by the push-factors. For example, a woman who was part of the group caught and deported by the Turkish authorities on their way to cross over to Syria early this year is a widow of a terrorist suspect shot dead in a police raid some time ago. She claimed she went to Syria, bringing along her two-year old child, to find a husband and a better life as she felt constantly under the watch of the police in Indonesia.

For others it is the pull factors that made them leave their homes for Syria. Through their Indonesian recruiters, they were promised high salaries and that their debts would be paid off. Plus — the ultimate jackpot — if they died in ISIS occupied land, they would all go to heaven, the recruiters promised.

One former recruit said he left Syria after four months of boredom and homesickness guarding a town under ISIS’ control. Ahmad Djunaedi, a former meatball hawker, was quoted by The Jakarta Post as saying that he was disappointed that he was only paid a monthly salary of US$42 (RM154), and, upon returning, made to pay back expenses incurred for the trip to Syria.

He was arrested two weeks ago, seven months after returning from Syria... showing how slow the authorities are in picking up returnees.

The police have said it is impossible to monitor the flow of people returning from the region, so they will focus on preventing people from leaving to join ISIS. But in a country as big and porous as Indonesia, this is a nearly impossible feat.

Some of the recruits apparently went to Syria by way of trips organised by tour agencies to Turkey, an increasingly popular destination for Indonesians because of its visa-on-arrival policy.

The government said it is preparing a measure to prosecute those who return or are caught attempting to join ISIS, including issuing a government regulation in lieu of law that forbids Indonesian nationals from going to conflict countries.

The good news is that the majority of Indonesian Muslims are not attracted to violent religious ideology. A public polling by Kompas daily showed that three quarters of the respondents supported a government regulation to act strongly against ISIS followers and 85 per cent want the religious ministry to revoke the permit of umrah (minor pilgrimage) tour agencies used by Indonesians to join ISIS.

An overwhelming 89.5 per cent support the blocking of radical online content, and three out of four are concerned that radicalism might affect their families. Most importantly, half of the respondents said they are disappointed by the government’s inability to fight religious radicalism.

This is invaluable input for the government to act on. To do nothing to tackle the threat of militancy and to counter hardline religious teaching is equivalent to losing the battle before it even starts.