Sunday, 29 Mar 2015 7:00 AM MYT By Devi Asmarani
Follow us on Instagram, subscribe to our Telegram channel and browser alerts for the latest news you need to know.
By Devi Asmarani

MARCH 29 — The picture on the front page of the influential daily Kompas speaks volumes: a tiny, frail-looking elderly woman in a simple house sarong, headscarf and a pair of flip flops standing in front of a panel of judges, as her lawyers watched on and cameramen and photographers hovered.

She had been detained since December until the media broke the story and drew public attention to her plight, leading to her release on bail.

Asyani, who is a masseur, earning Rp15,000 (roughly one US dollar) a session, claimed the wood came from a tree her late husband felled in their own land five years ago. They had been kept at her home until July last year, when she took them to a carpenter to make a bed so she could receive clients at home.

Later that month, police, acting on reports from Perhutani about illegal teakwood harvesting in their plantation area, raided the carpenter’s home, leading to his arrest and a few others including Asyani. Her fault: she couldn’t produce proof that her wood was certified.

In another case, a boy in North Sumatra was sentenced to death for premeditated killing, although there is some evidence that at the time of the verdict he was only 16 years old, a minor under Indonesian law.

Human rights organisation Kontras claimed the investigators had marked up his age to 19 for the purpose of prosecuting him.

The justice system in Indonesia delivers the most inconsistent results. Court sentences can be disproportionately harsh or outrageously lenient, depending on who is tried and, most importantly, how much money is exchanged with the law enforcers and members of the judiciary involved in the case.

Consider this case of physical abuse I have been following for a report for my website, Magdalene.co. From interviews with the abuse victim who reported the case and a few people involved, it was apparent that the prosecutor was trying to force the victim to drop the case for the benefit of the accused.

When the victim refused, the prosecutor told her that she would regret it. True enough, after what seemed like a stalling tactic that dragged the trial on for months, the prosecutor only asked for three months’ imprisonment for the abuser. It was much less than the five years cited by law for serious physical abuse. Early this month, the accused was sentenced to three months.

Many tycoons have walked out free (or even escaped prosecution altogether) in high profile cases that range from tax evasion to bribery. Politicians get a fraction of the maximum jail sentence for corruption and sons of government officials escape prisons for accidents that killed people.

In 2008, many were caught by surprise when Tommy Suharto, the son of the late former president Suharto, was released from prison four years earlier than his sentence. He was jailed and convicted for 10 years for ordering the murder of a judge.

“The law is sharp to those below, and dull to those above” is how Indonesians describe the discriminative justice system that leans towards those with money and power.

Last year, the country voted for President Joko Widodo, a relatively new face in politics, in the hopes that his integrity would bring some positive change to the sense of hopelessness and distrust Indonesians have towards law enforcement and the judiciary.

But five months into his administration, not only has little been done to fix the problem; there is also an uneasy feeling that he might be helpless in preventing it from getting worse 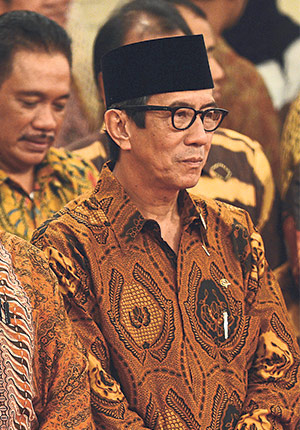 The first mistake he did was appointing party hack Yasonna Laoly as minister of justice and human rights. Yasonna is from The Indonesian Democratic Party of Struggle (PDI-P), the party that nominated Jokowi’s presidency last year. Early this month, he announced a plan to review a 2012 regulation that tightens the rules for remission for convicts of extraordinary crimes, which includes corruption, terrorism and drug trafficking.

The Government Regulation No. 99/2012 requires graft convicts to collaborate with authorities and pay back the state losses they caused as well as the fine imposed by the court before they can be granted remission.

The regulation also stipulates that the Ministry of Justice must get the approval of the police, Attorney General and Corruption Eradication Committee (KPK) before cutting down jail sentences.

Yasonna wants to remove KPK’s authority to decide whether a convict has co-operated, claiming the regulation makes the anti-graft body “punish the suspect twice.” The plan drew the ire of many, especially as it came when Indonesians were wary of an apparent police efforts to undermine KPK.

KPK said they were concerned that if it goes into effect there would be no deterrent effect to corruption. It raises the question of conflict of interest as some PDI-P officials are serving jail sentences for corruption. Not surprisingly, the few people who have expressed support are legislators.

Sensing the unpopularity of the plans, Jokowi has played it down, though short of stopping it. But it is not enough.

Jokowi needs to publicly acknowledge the scale of the problems of corruption and a lack of integrity in the law enforcement and judiciary system that creates the massive public distrust of these institutions. He then needs to flex his muscles as the chief executive of the country to show that nobody is above the law, stopping the police from its systematic efforts to weaken KPK.

A major overhaul is needed to eradicate the deeply entrenched corruption in the law enforcement and justice system, and it may take a long time. But for now he needs to show who’s the boss and which side he is on, because right now it is not very clear.