Sunday, 02 Nov 2014 7:15 AM MYT By Devi Asmarani
Follow us on Instagram, subscribe to our Telegram channel and browser alerts for the latest news you need to know.
By Devi Asmarani

JAKARTA, Nov 2 ­— Say what you will about Indonesian President Joko Widodo’s newly inaugurated “Working Cabinet”, but the first week may have seen more work being done than the first week of any previous administrations. At least it seems to be doing the right thing and addressing the right issues.

True, the Cabinet, announced last Sunday, hardly met the high expectations expected of him, with some controversial appointees mostly from his Indonesian Democratic Party of Struggle (PDIP). But to be fair, this was the first of many tests Jokowi will face that saw him successfullywalking the tightrope between making good on his electoral campaigns and maintaining the support of the parties that back him.

Some names expected to instill confidence in his government were eliminated at the last minute from the line-up, in their place were some of the least popular names. They include Coordinating Minister for Human Development and Cultural Affairs Puan Maharani, Defence Minister Ryamizard Ryacudu, and State-owned Enterprises Minister Rini Soemarno.

Puan, the daughter of PDIP chairman and former President Megawati Sukarnoputri, is considered an unsuitable choice considering her professional credential; while the appointment of businesswoman Rini, who led Jokowi’s transitional team, is largely credited to her closeness to Megawati.

Riyamizard, a former Army commander under Megawati’s presidency, is critised for his poor handling of the military’s treatment in the Aceh separatist conflict a few years back. Their appointments clearly showed the powerful hand of the PDIP’s matriarch.

As if to address this concern, Jokowi showed who’s the boss in the first Cabinet meeting the next day, telling the ministers that he expected they would implement his vision, and that they would set aside sectoral ego and work together to achieve the best result.

His first challenge is the economy. Having inherited an economy that saw the lowest level of growth in four years, at 5.1 per cent in this year’s second quarter, and with limited fiscal space, Jokowi needs to move fast. 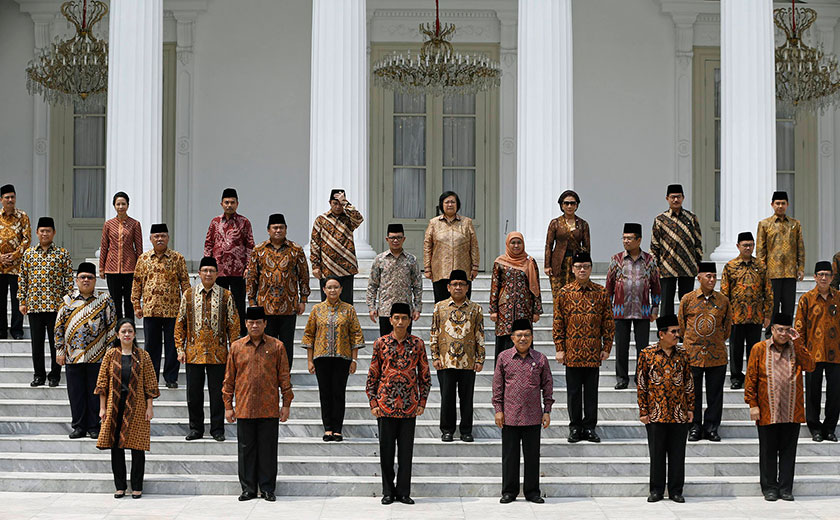 The first on his agenda is to cut the ballooning fuel subsidies, which are estimated at Rp276 trillion (about US$22.7 billion, RM72.6 billion) or 15 per cent of next year’s total state spending, to allow him room to implement his economic recovery agenda. The government is planning to increase the subsidised fuel prices by Rp3,000 early this month from the current price of Rp6,500, but not before a new welfare programme to ease the impact of the hikes to the poor is in place.

The welfare programme, which will cost the government Rp6.48 trillion, will kick off tomorrow (Monday, November 3) with the introduction of three cards to be distributed to financially vulnerable families. The cards will be used to provide health services and education for them, and eventually to disperse a monthly allowance of Rp400,000 a month per family to bank accounts set up for the receiving families. This is expected to lessen the impact of inflation cost by the fuel prices hikes, but significantly reduce the current account deficit.

Jokowi has also pledged to boost tax collection for state revenues, which has been consistently under target every year. Less than 2.5 per cent of Indonesia’s 240 million population pay tax currently. An increase in revenue and decrease in deficit will allow the government to go ahead with its priorities to improve infrastructure to boost the economy and provide jobs, as well as to beef up much-needed public services like health and education.

In addition, the President appeared to have picked the right people to oversee the maritime affairs, a highly potential sector largely undermanaged in previous governments. Coordinating Maritime Affairs Minister Indroyono Soesilo was a Fisheries and Aquaculture Resource Division Director at the Food and Agriculture Organisation (FAO). Under his coordination is the most talked-about Minister of Marine and Fishery Affairs Susi Pujiastuti, a straight-talking, hardworking, tattooed smoker and high school dropout.

Like Jokowi, Susi is also a self-made person who started out as a fish vendor in West Java at 18, before growing her business into a major fishery company and expanding into aviation business.

Among her main agenda is to improve connectivity by inviting private participation to build a number of seaports on remote sites that have fishery potential. She also pledges to eliminate illegal fishing, especially ones that take place in Indonesia’s maritime border waters. To do this, she will open public data on vessels owned by locals and foreigners that was previously highly kept from public.

There will be an overhaul of the diesel subsidy system for small-scale fisher folks, a system prone to abuses by larger-scale fishing companies. And to help the 2.4 million fisher folks across the archipelago, she pledges to cut the costly middlemen system out of the trade chains.

These are just some of the early initiatives that are expected to bring some changes. Their implementation and success certainly remain to be seen, especially considering significant challenges from Parliament controlled by the opposition group.

But Jokowi’s no-nonsense style of leadership and work ethics that shun unnecessary formalities and go for results will hopefully reflect the character of his aptly named Cabinet. A highly performing Cabinet will keep the level of public trust on the government high, a factor that may save him in his future battles with Parliament.

*This is personal opinion of the columnist.