Time to ban FPI, those 'thugs for hire'

Sunday, 12 Oct 2014 7:00 AM MYT By Devi Asmarani
Follow us on Instagram, subscribe to our Telegram channel and browser alerts for the latest news you need to know.
By Devi Asmarani

OCTOBER 12 — It is rather ironic that the only elected government official who openly called for the ban on controversial hardliner organisation Islam Defenders Front (FPI) is a Christian of Chinese descent currently being targeted by the group.

“My principle is simple, if it’s anarchic, it should not be allowed in Indonesia,” Ahok, Basuki’s popular moniker, said on Friday, just as FPI’s supporters rallied outside against his upcoming inauguration as Jakarta Governor to replace president-elect Joko Widodo.

FPI’s main objection is Ahok’s religion and ethnicity, a fact that hardly bothers most Jakarta residents who voted for him and Jokowi in 2012.

A week before, its rally in front of the Jakarta City Council turned violent, leaving 16 police officers injured and several cars damaged. The Jakarta Post quoted the police as saying that the group had engineered the riot with protesters — some travelling from West Java towns — bringing rocks and manure in their trucks. 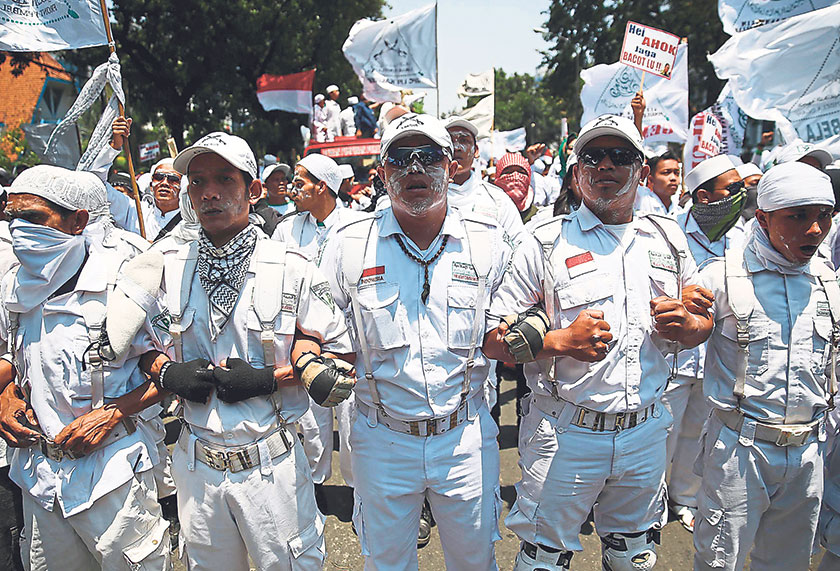 One of its leaders, Novel Bamukmin, escaped arrest and had been at large after the unrest until he gave himself up on Thursday. He faces a maximum of six year’s imprisonment for provocation. The remaining 21 members had been arrested since the rally, although four of them were released later because they were minors.

This is the just the latest of a long list of violence perpetrated by FPI, whether religious-based or politically motivated. Founded as an urban militia in 1998 by the Saudi-educated Habib Rizieq Shihab, FPI was known to have been mobilised then by the military and the police to counter the student-led reform movement that brought down the late president Suharto.

It grew in size and gained notoriety quickly thanks to the loose restriction of public expression in the democratic transitional period. But its rise also benefited from the fact that the majority of Indonesians tend to be less critical on hard line religious-based expressions, even if they don’t agree with it, as well as the increasing politicization of religion in the decentralisation democratic system.

From vandalising bars and night establishments during the Ramadan months, its campaign of violence expanded to include assaults on minority religious communities and groups. Here are a few examples of what they have done in the past 16 years:

According to police records, the FPI is responsible for more than three dozens serious breaches of laws across Indonesia. And that was only three years ago.

In some cases, action was taken, but most often the punishments were too light, or only the “foot soldiers” were implicated. Neither the government nor the police ever took any action against the organisation.

Which justifies the suspicion long validated in literature and reports — including the US Embassy cables published on Wikileaks — that FPI enjoyed the backing of the authorities, or at the least prominent figures in the Indonesian police and military.

The International Crisis Group (ICG) report on hard line groups in Indonesia referred to FPI as an “urban thug organisation” that functioned as an attack dog for security officials.  Though police and the military deny this, FPI leader Rizieq once proudly said in a speech that the group and the police were “like husband and wife.”

But even if their link has since been severed, FPI has evolved from the authorities’ “proxy” to keep the civil society movement in check to a free agent “thugs for hire” in white Islamic garbs.

FPI has claimed that it is a self-funding organisation, but it is obvious that most of its members are unemployed young men with no financial resources, more ready to flex their muscles to intimidate than to demonstrate their religious savvy to propagate Islam.

It is hardly a secret that they negotiate for money. An acquaintance of mine was a manager for a prominent international chain café in Jakarta a few years back when she was visited by a mob of FPI members demanding that the establishment close during the fasting month. They left soon after they were paid a handsome settlement.

Early this year, FPI was among the Islamist groups that supported the presidential candidacy of Prabowo Subianto. When Prabowo’s Gerindra Party led the parliamentary move to end the direct election of regional leaders last month, Ahok publicly resigned in protest from the party that nominated him to the post. FPI then intensified its racially tinged campaign against Ahok, with Gerindra’s apparent support.

Jokowi, who will be sworn in on October 20, said he would act firmly against FPI. His track record has shown a commitment to maintain religious harmony and pluralism in Indonesia. This will be a long-overdue change after Yudhoyono’s disappointing lack of action and ambiguity on religious-based violence like those perpetrated by FPI.

His government’s vacillating stand on this issue is reflected in Home Affairs Minister Gamawan Fauzi, who in 2012 threatened to ban FPI, but a year later praised it as a “national asset”, the government’s partner to maintain public order.

A 2013 Indonesian Law stipulates that an organisation can be banned if it expresses hostility towards certain ethnic groups, religion, race or group, and also when it disrupts public order through violent acts.

The government can issue a written warning three times, before it can begin the process of disbanding it through court. The Home Affairs Ministry has issued a warning on FPI twice, in 2008 and 2012. There is no excuse not to issue the final warning and begin the process of banning this group.

Most Jakartans are happy with Ahok’s performance, seeing him as a rare figure with integrity in the government who is not afraid to fight the uphill battle against an inept and corrupt bureaucracy.

Many of them are also fed up with FPI, and are placing their hopes that under Jokowi the nightmare that has haunted Indonesia for too long in the guise of defenders of Islam will come to an end.

* This is the personal opinion of the writer.