Sunday, 05 Oct 2014 8:40 AM MYT By Devi Asmarani
Follow us on Instagram, subscribe to our Telegram channel and browser alerts for the latest news you need to know.
By Devi Asmarani

OCTOBER 5 — It’s hard to envision anything other than a bleak future for Indonesian democracy after the events that took place in the legislature this week.

The proceeding in the House of Legislatives that handed over the new parliamentary leadership to the Red-White Coalition (KMP) practically dashed whatever hopes Indonesians had of having a more accountable political leadership. In fact it bears too much resemblance to the military’s scorch-earth policy: If I don’t get it, no one will.

Failing to secure a win for presidential candidate Prabowo Subianto, KMP, a coalition of six parties with nearly two-thirds of the 560-seat House, has proven to be an unstoppable political force bent on undermining president-elect Joko Widodo’s leadership by eroding Indonesia’s democratic system.

Its two short-term goals were achieved the previous week with the endorsement of two legislations. One of these bills puts an end to direct elections of the governor, mayors and district heads; while the other scrapped articles that automatically grant the House’s leadership to the legislative election victors — in this case Jokowi’s Indonesian Democratic Party-Struggle (PDI-P).

In the contentious voting process for the powerful House Speaker and deputies that ensued on Wednesday night, the PDI-P-led coalition of four parties with a combined 36 per cent House seats lost to KMP. 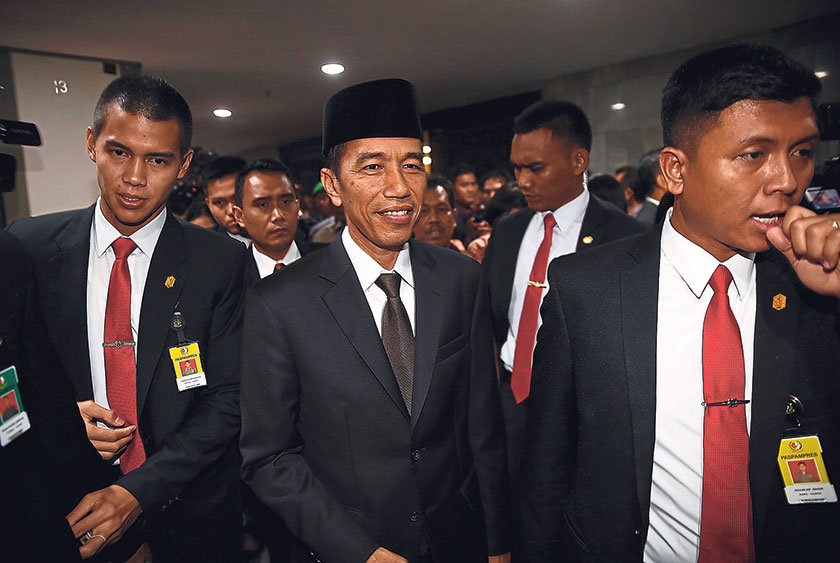 Indonesia’s president-elect Joko Widowo (second from left) leaves City Hall after resigning as Jakarta governor on October 2, 2014. He faces a tough time ahead as the opposition have thwarted so many pro-democracy measures in the country. — Reuters pic

Voted as House Speaker is controversial figure Setya Novanto, a senior Golkar politician who has been implicated in several graft cases and is currently being investigated by the Corruption Eradication Commission (KPK). His four deputies from Gerindra, Justice and Prosperous Party (PKS), National Mandate Parties (PAN) and “Democratic Party” do not have illustrious track records either. PAN’S Zulkifli Hasan, who was forestry minister in Susilo Bambang Yudhoyono’s Cabinet, was also recently questioned as a witness in a KPK investigation.

Together the new opposition group will pose a serious threat to Jokowi’s administration and become a major destabilising force in Indonesia’s politics and economy. On Thursday, just hours after the voting took place in the wee hours of the morning, share prices plunged to their lowest in two months and the rupiah continued to slip, as the market doubted Jokowi’s ability to implement his economic agenda with “blood-hungry” opposition circling him in Parliament.

Crucial initiatives to improve the economy such as cutting fuel subsidies, already a politically sensitive move even with a friendly Parliament, will face even tougher resistance in the legislature.

But even more worrying is that what KMP is fighting for hints at a darker undercurrent; the return to a New Order-style democracy is underway and the force is gaining strong momentum even among those who were part of the 1998 Reformasi. There is even a member of the Soeharto clan in the House: his daughter Titiek who was once married to Prabowo.

Where the New Order revolved around the late strongman Soeharto, however, the current regime is controlled by a gang of politically promiscuous politicians, many tainted or tied to corruption, with no interests other than to safeguard their own political and economic interests.

If a democratic system has a fire alarm, it would be going off loudly at this point signalling a critical time for Indonesia.

As the political oligarchy in the opposition consolidates its power through legislative measures, they are far from being done in reversing the path of democracy in Indonesia. The regional election law that was passed meant returning the power to pick governors, district heads and mayors to the local legislatures. With the parties’ strong presence in the region, KMP’s obvious next agenda is putting their people to head the regional governments, ensuring a tighter grip across the archipelago.

And having seized control of the House, they can do the same with the presidential election, reversing the direct election and returning to the New Order’s system of having the Parliamentary upper chamber or People’s Consultative Assembly (MPR) pick the president, a practice that allowed Soeharto to stay in power for 32 years. In fact some of their KMP members have already admitted this is part of their long-term agenda.

And with some corruption suspect in parliament leadership, what can stop some of these lawmakers from realising their intention to curb the power of the anti-corruption committee? There had been initiatives in the past to make it harder for KPK to investigate elected officials including legislators, and this time it just might gain enough momentum.

The failure of Jokowi’s administration may be the KMP’s mid-term goal. In 2001, Abdurrahman Wahid was impeached by Parliament, and although some legislative measures have been taken since then to make it harder to impeach a president, it is not too farfetched a scenario for those familiar with the intricacy and the unexpectability of Indonesian politics.