Operations director for Summerfield, Nizam Azam, hopes more kids in Malaysia will drink milk daily. ― Picture by Firdaus Latif
Follow us on Instagram, subscribe to our Telegram channel and browser alerts for the latest news you need to know.
By R. Loheswar

KUALA LUMPUR, Aug 13 ― Emma Idris and Nizam Azam decided to step up their efforts in raising awareness of the importance of drinking milk filled with nutrients by promoting their product Summerfield at the ongoing Malaysian Agriculture, Horticulture and Agrotourism Exhibition (Maha).

All because they felt malnourishment among children is something that needs to be addressed.

Summerfield has in total nine booths in its first-ever appearance at the exhibition with the aim of raising awareness of its delicious milk beverages which come in a variety of flavours.

“Recently when the health ministry highlighted the issue of kids' stunted growth due to lack of nutrients, we knew this was an ongoing issue. We wanted to try and support the government's agenda to have good balanced food especially for the kids,” said Nizam, the operations director for Summerfield.

“The reason for this is a lack of nutrition as most of the dairy products are made from powdered milk. In Malaysia, they do not allow raw milk to be used. This is why we import frozen blocks of milk from Australia to our plant here and we process it there.

“The product is then sold for around RM2.60-RM2.80. Anything lower than RM2 is not made from raw milk and only powdered milk which we don't want. However, at schools we sell them at RM2,” Emma, the general manager explained.

Summerfield is a manufacturer of milk-based and fruit-based products in Malaysia and is 100 per cent local.

It has been around since 2011 and expanded in 2015, moving to Rawang where its factory is located. Its aim is to raise awareness among Malaysians to drink milk, especially kids, in order to prevent malnourishment.

It has held road shows and free milk giveaways at primary schools throughout the nation for several years now and are continuing to grow its fan base. It started its pilot project in Selangor in July.

The Covid-19 pandemic caused many people to lose their source of income, school sessions were stopped and many struggled to make ends meet as prices of goods started to rise.

Schoolchildren took the brunt of this as reports have emerged since 2018 of Malaysia's children lacking nutrition while the adults are growing sideways.

“Back in the early 90s we had the Program Susu Sekolah and encouraged kids to drink milk. Now that has stopped. If we look to Europe, they cannot live without milk and kids are encouraged to drink it due to its nutritional value.

“We'd love for that to come back. We want kids to drink milk every day. Hence we have engaged with the education ministry in various states and have the approval to do campaigns on the virtues of drinking milk,” said Emma.

It has three main flavours, all promoted by the characters from the popular local cartoon series Didi & Friends. 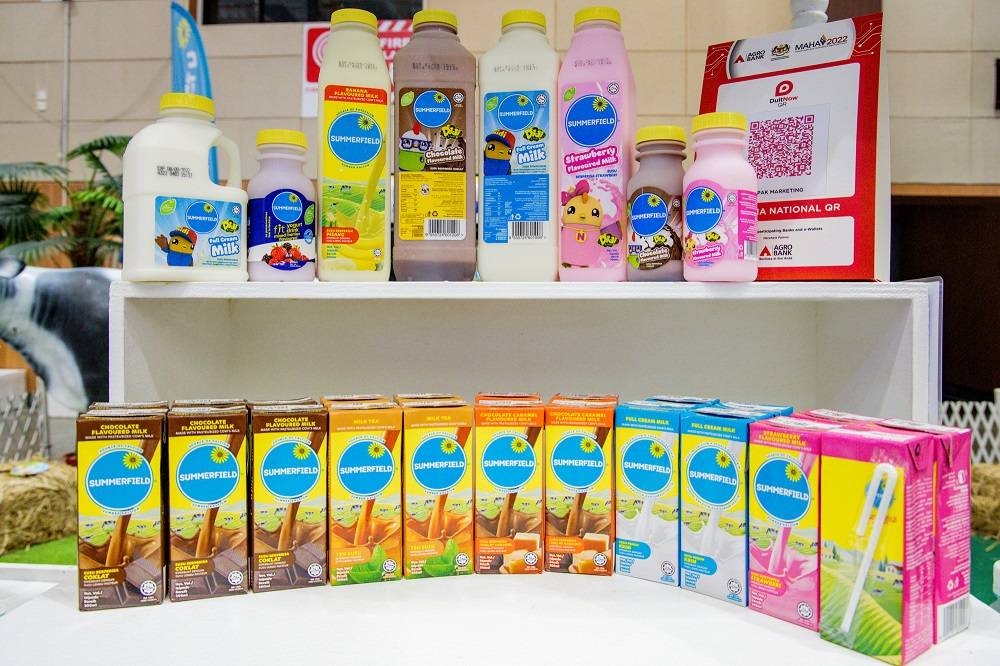 The three chicks are Didi, which represents the full cream milk, Jojo represents chocolate milk. while Nana is for strawberry milk.

“Coming up in September we have our new product for lactose intolerant people which is soy and oat-based,” said Nizam.

“We can be found at all hypermarkets including Aeon and Jaya and Village Grocer. Our milk is not very sweet and it's more than RM2 but this is because of us using good raw materials for the drink.

“We have to use raw milk so the taste, nutrients and flavour are intact. As far as the Maha event goes, it has been incredible. We've met a lot of people, our mascots are here to perform five times a day and we hope parents will choose us as their preferred brand moving forward,” said Nizam.

Maha will go on through Sunday, August 14 at MAEPS Serdang.

Maha 2022: Trinity42 is here to digitise your brands and products to be global competitors